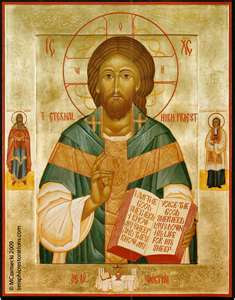 The Baptismal Priesthood of the laity, from whom baptized, confirmed and Holy Eucharist receiving Men are called to the ordained Priesthood: 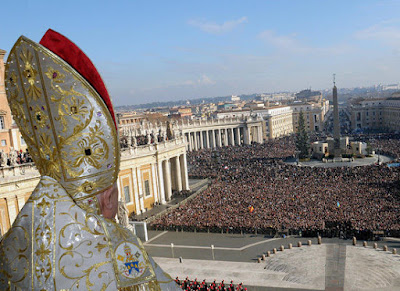 The ordained priesthood of the Catholic Church: 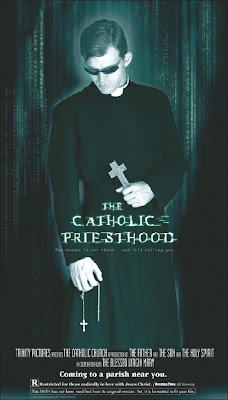 In the Church there are three priesthoods. The first is that of our High Priest, Jesus Christ, and the exclusive nature of His Priesthood from which the Church experiences Jesus' intercession on our behalf before the Father and by the power of the Holy Spirit (in other words, Jesus, who is God the Son, worships God the Father and brings us into that worship as our eternal High Priest and by the power of God the Holy Spirit).

The Priesthood of the Laity by virtue of Holy Baptism (and the other two sacraments of Initiation, Confirmation and Holy Eucharist) means that the laity as a part of the Mystical Body of Christ are called to intercede with one another and to worship God the Father. The "source and summit" of this worship is at Holy Mass, when the laity joined to the ordained priest who is called from them (the laity) worship God the Father, through Jesus Christ the High Priest and by the power of the Holy Spirit.

Men are called from the fully initiated (not just from the Baptized, but those also Confirmed and receiving Holy Communion) to be a part of the Sacrament of Holy Orders which itself has three degrees, deacon, priest and bishop.

This is for the Church but not everyone is eligible for it; it is for men only who have no other impediments and whom Christ the High Priest calls through the ministry of bishops and the desire planted by Christ the High Priest in the heart of the man being called.The ordained priesthood is not a "right" but an exclusive calling for an exclusive number of men. The maleness of the priest is necessary to be a sacramental sign of Jesus Christ, true God and true Man. In other words, the ordained priest especially during the Mass puts "flesh in an "incarnational way" on Jesus Christ the Risen Lord who on earth is "the invisible High Priest in the Spirit" until He returns at the end of time and we see Him in His glorified Flesh. The Maleness of the Risen Lord, Bridegroom and Eternal High Priest is not inconsequential and the maleness of the ordained priest isn't inconsequential either; it is absolutely necessary! But the ordained deacon, priest or bishop is still a sinner configured to the laity and stands with the laity in humility conscious of personal sinfulness and grateful for being allowed into the Holy of Holies which brings us salvation.

The laity share in the Priesthood of Jesus Christ at Mass and the other sacraments assisting the priest in the Church's worship primarily in their role as laity worshiping from their exalted place in the nave and at their pews. From them, though, some are called to be lectors, cantors, choir members, altar servers, ushers, greeters and Extraordinary Ministers of Holy Communion. They can assist the priest by distributing Holy Communion at Mass when a real need exists and also bringing Holy Communion to the home-bound and hospitalized. But the primary role of the laity at Mass is what they do at Mass apart from the specific ministries. Nothing is more important than what the vast, overwhelming number of laity do each and every day and every Sunday, participate with full conscious and active awareness in both the verbal and spiritual ways possible from their exalted place in the nave of the Church! Got that?

The corrected translation of the "Orate Fratres" makes clear that the laity are integral in offering the "sacrifice" with the Priest at Holy Mass (but the laity cannot do it without Christ's High Priesthood sacramentalized in the ordained Priest) when the priest turns to them and says, "Pray "brethren" that my sacrifice and yours may be acceptable...."

Even at the Washing of the Feet on Holy Thursday, the priest needs assistance from lay ministers (men,women or children) to wash and dry the feet of the 12 men who symbolically represent the 12 first Christians Jesus called to form His Church and be her first priests (bishops) as the 12 apostles. So having lay men or those in the process of being fully initiated into the Church at the Easter Vigil is very apropos. The apostles are laymen before they are made priests at the Last Supper! But they are also men!

But the Catholic Family is also the Church in miniature where in non-sacramental and sacramental ways, the sacraments of the Church are symbolized and thus become "sacramentals" with a little "s" but also within the context of a capital "S" in terms of baptismal, confimational and Holy Eucharistical responsibilities given them in the Sacrament of Holy Matrimony!

The wife in the Sacrament of Holy Matrimony is a sacramental sign (and truly Sacramental with as capital "S" of the Bride of Christ who with Christ begets children)and shares in the ministry of heading the family as Christ heads the Church. In fact the husband and wife together are the Sacramental Sign in Holy Matrimony of the true nature of the Church, Bridegroom together with His Bride and the offspring the marital act helps create!) In the Church Christ "begets" spiritual children through His Spotless Bride the Church in the Sacrament of Baptism. But in Holy Matrimony, the husband and wife beget biological children in the marital act in the order of nature, but in cooperation with God and His creating power. In fact the traditional "canopy" over the altar is a symbol of the "canopy" over the marriage bed! See the sacramental connection of the relationship of the Mass and receiving Holy Communion as a spiritual marital act of Christ self-giving to His Bride in a tangible and physical (albeit spiritual, sacramental) way?

But also the Church in miniature, husband and wife, mother and father are called to teach, rule and sanctify their family, their children as the Church does in general, Church meaning Bridegroom and Bride! They are called to care for them and provide for their needs (caring for the poor). They are called to care for them in their sicknesses (Sacrament of Anointing) and be a model of forgiveness (Sacrament of Penance). They are to see to it that the family celebrates Mass each Sunday and Holy Day of Obligation, that the children receive all the sacraments and that they answer God's call to the priesthood or to marriage or to the single life perhaps in religious life.

The laity in general share in all the sacraments in a non-sacramental way when they call people to Christ, care for them in their sickness and injuries, forgive them and uphold the dignity of marriage and the marital act which is meant for marriage alone between one man and one woman.

We belong to a wonderful sacramental, incarnational Church and to Jesus Christ, the Head of the Church, her Bridegroom and eternal High Priest. Praise God from whom all blessings flow this Easter Triduum!
Posted by Fr. Allan J. McDonald at Thursday, April 05, 2012

This article reminds me of something my pastor told me in one of our earliest discussions: The first duty of a married man is to pastor to his family.

I was only finding occasional work, we were living on savings, and I was struggling with my inability to contribute significantly to Church needs.

However, what I've always wondered is if these things can actually be called "callings?" Is it possible to feel a real, genuine supernatural calling to these apostolates in the same way it is possible to feel a real, genuine supernatural calling for a man to the priesthood or married life or for a woman to the religious or married life? I ask because these things are not sacramental in nature, nor are any vows involved. To me (and I hate using that phrase), it's a bit like being "called" to be a basketball coach or a member of the parish Altar Society. Yes, you can have a want to do these things, but you can't feel a genuine "calling," can you?

I hear that word thrown around a lot, and while I understand what is intended, I really think it is a bit strong to use "calling" to describe a want to take part in these activities. I'm not complaining, but I'm just trying to clear this up. Am I right, or no? This is one of those word legalisms that probably doesn't mean much in casual conversation--like "Eucharistic Minister"--but is extremely significant on a deeper level.

Certainly these are callings in a non-sacramental and non-permanent way. Anyone who wants to be a lector can't. They have to be Catholics in good standing and fully initiated (this includes Confirmation) and there can't be any other impediments and the pastor has to approve of the person be selected and in the case of EMC's the bishop has to approve it too! In our parish I issue a real call for various ministries through pulpit and bulletin announcements and our stewardship renewal.

The Church's primary need is to have committed laity, especially those married, pastoring each other (I guess we could call that admonishing and encouraging the sinnner?) But the husband it the "pastor" of his family and the head of the home--I know that I am being politically incorrect and some will say that taking this to a religious extreme is abusive of wives and children. But that is simply not so if the "pastor" know who Christ is and act as Christ or is Christ like! You can't go wrong then, except through sin!

Father, pastoring to my family--in all matters of life--is a trial and an unending lesson. It teaches many things: patience (first!), humility, listening skills, and the need to walk in another's shoes.

I cannot claim to be acting Christ-like, but I continue to aspire to that model. I fail, and I fail, but I hope I improve.

If a husband and father takes the responsibility seriously, I think that it will lead him away from abusive ways, not into them.

This "calling" business is getting to sound pretty congregational: "Lawd, Billy Bob was out on the John Deere and he seen a white pigeon light on a burnt out '54 Ford body and he done decided the Lord was a' calling him to preach. He got hisself laid hands on by Reverend Cletus and now he's a' preachin' down at the Holy Overcoming Jesus Church on the frontage road. Praise God!"

Calling business is very Catholic, congregationalists stole it from us! :)

Yeah, but they don't understand it the same way we do...LOL!

THANK YOU for posting this.
~SL