HOLY THURSDAY NEED NOT AND SHOULD NOT BE POLITICALLY CORRECT OR INCLUSIVE: GO AHEAD AND WASH THE FEET OF 12 MEN

UPDATE ON THE RUBRICS AND THE NEW ROMAN MISSAL FOR HOLY THURSDAY: THE ROMAN CANON IS PRINTED IN THE SAME SECTION AS THE COLLECT, PRAYER OVER THE GIFTS, AND PREFACE, THAT IS TO SAY, PRINTED AGAIN, SO THAT NO ONE SHOULD THINK THAT ANY OTHER CANON OR EUCHARISTIC PRAYER SHOULD BE USED OR GIVEN PLACE OF PRIDE OVER IT. THE CLEAR PREFERENCE AND MAKE NO MISTAKE ABOUT THIS, IS THAT THE ROMAN CANON BE PRAYED AT THE EVENING MASS OF THE LORD'S SUPPER! SIMPLY WOW! 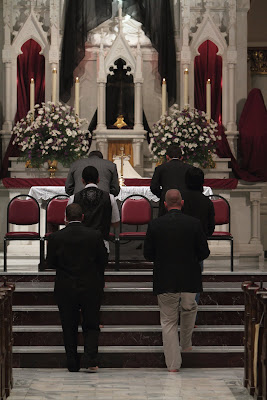 To the far right is Fr. Dawid as a seminarian visiting us for Holy Thursday, 2010 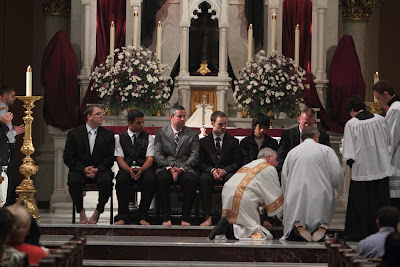 The "Mandatum" which refers to the "Washing of the Feet" and is why Holy Thursday is also called "Maundy Thursday" is purely optional for the Evening Mass of the Lord's Supper. If it is celebrated it takes place after the homily. The rubric both in Latin and English says, "

"After the Homily, where a pastoral reason suggests it, the Washing of Feet follows.

The MEN (VIR) who have been chosen are led by the ministers to seats prepared in a suitable place. Then the Priest (removing his chasuble if necessary) goes to each one, and, with the help of the ministers, pours water over each one's feet and then dries them."

The last couple of years of my pastorate at Most Holy Trinity in Augusta and since I've been here, we have chosen, according to the rubrics, 12 men for this optional ceremony. Prior to that I always had a mix of men and women.

When I was the Master of Ceremonies at our Cathedral, Bishop Lessard would only was the feet of six people, men and women. I asked him why. He stated that if we asked 12 that would represent in a symbolic way the 12 apostles and we would have to have 12 men. Only picking six people changes the nature of the symbolism and thus allows for men and women. Of course this is completely non-rubrical and should be done as a prelude to Mass if done, which I wouldn't do, similar to Christmas pageants!

First of all, Jesus institutes the Mass within the context of a seder-like supper or a Passover-like Supper. But the only people present or at least the only people to whom this is initially directed is to the 12 apostles who become the first "ordained priests/bishops" during the institution of the "Lord's Supper" or the "Mass" when Jesus tells them directly "Do this in memory of me."

Every Mass since Holy Thursday, the priest or bishop praying the Eucharistic Prayer directs is prayer to God the Father through the High Priest, Jesus Christ recalling to God the Father what Jesus did the night before He died and does on Good Friday. The Eucharistic Prayer is clearly directed to God the Father, not to the congregation although when the priest or bishop celebrating Mass faces the congregation and gestures to them during the praying of the "Words of Institution" the laity and the priest might think that the Mass is a memorial of Holy Thursday and the people before him (the priest) represent the 12 Apostles. Nothing could be further from the truth, but the ritual action facing the people at this point muddies the reality of what is actually occurring in the ceremonies which are prayer ritually spoken. The way you pray is the way you believe for better or worse depending on the signs that accompany the ritual action.

John's Gospel adds the mandate to be of service to God's people through the symbolism of the Washing of the Feet, that the High Priesthood of Jesus Christ in which the ordained Apostles/bishops share in a partial way must not just be a "temple, Old Testament-style" priesthood preoccupied with ritual purity, but a Priesthood modeled after our Savior's example of service throughout His public ministry and symbolized by His washing of the dirty feet of the Apostles. Clearly the High Priest Jesus Christ is not concerned about ritual purity nor should His priests, but willing to get dirty and take on the sins and illnesses of the world as Jesus did during His public ministry and will do the next day on the Cross of Good Friday.

Of course, since deacons, priests and bishops are called from the fully initiated laity, through Baptism Confirmation and Holy Eucharist, it stands to reason that the ordained in the Catholic Church should call forth the gifts of the laity who need deacons, priests and bishops to be initiated into the Church in the first place through the three sacraments of Initiation to also share in the priesthood of Christ through these sacraments, but not in the same degree as the ordained.

Holy Thursday's rubrics gets it right.

I pray your parish does it correctly and doesn't resort to liturgical literalism by having everyone wash everyone else's feet and to have everyone recite the Words of Institution at the Consecration of the Mass.

We deacons, priests and bishops don't need to worry about political correctness and inclusiveness when it comes to the Washing of the Feet, it is about us and our Ordained role, without which there would be no fully initiated laity or Sacraments of Confirmation, Holy Eucharist, Anointing of the Sick, Penance and Holy Orders. I suspect there could still be Holy Baptism and Holy Matrimony since neither of these two sacraments need an ordained deacon, priest or bishop to make valid.

Today, Holy Thursday, is all about celebrating the High Priesthood of Jesus Christ, the Ordained Priesthood or Holy Orders and the Lord's Supper, the Mass. Don't make it into anything else but that and be sure as many of the laity are present for the Sacraments of Holy Orders and Priesthood are for them as without these two Sacraments their Sacramental life would be completely incomplete. We all need the High Priesthood of Jesus Christ and His one Sacrifice memorialized in perpetuity until the Lord returns for our salvation. Poltical correctness has nothing to do with tonight's celebrations. But the entire Church will be gathered at the Evening Mass of the Lord's Supper: first, Christ the High Priest, Bridegroom and Head of the Church which every male priest is a sacramental sign in a specific tangible, visible, biological way,and the laity who with the ordained priest comprise the Mystical Body of Christ and the Bride of Christ redeemed in His Blood on Good Friday.

It can't get any more nobly simple than that nor sublime! Make the signs speak for themselves Holy Thursday.
Posted by Fr. Allan J. McDonald at Thursday, April 05, 2012