CHRIST IS RISEN! HE IS RISEN, INDEED! ALLELUIA

I took this with my iPhone of the reredos of our main altar (with the crucifix on it facing the priest, Benedictine style). Dr.Buck Melton took many photos of the Easter Vigil which I will more than likely post on Tuesday. The floral decorations for solemnities are always stunning, but this Easter especially so! Many thanks to Elaine Schmidt and Steve Gonser for doing such a fabulous job! 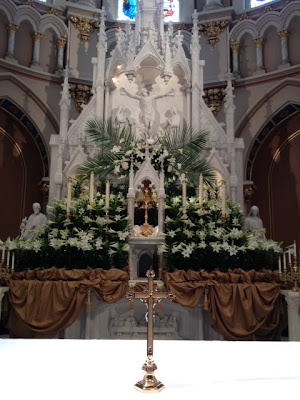 Father, accept this candle, a solemn offering, the work of bees and of your servants’ hands, an evening sacrifice of praise, this gift from your most holy Church.But now we know the praises of this pillar, which glowing fire ignites for God’s honor, a fire into many flames divided, yet never dimmed by sharing of its light, for it is fed by melting wax, drawn out by mother bees to build a torch so precious.O truly blessed night, when things of heaven are wed to those of earth, and divine to the human. 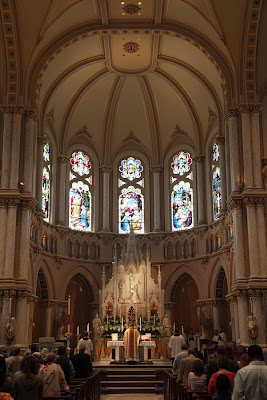 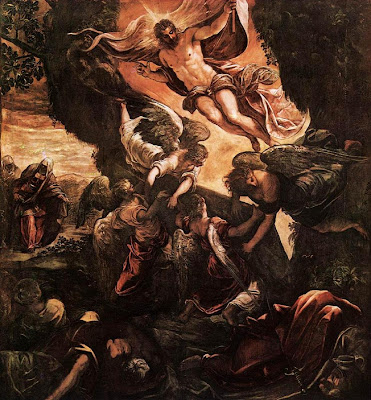 The flowers took my breath away as did the Benedictine altar arrangement at the 1 p.m. Mass. I must add a "thank you" to the Men's Schola for calling down the angels to St. Joseph on this most happy day! One of the most beautiful Masses ever!!

It was a wonderful Mass and the attendance was quite good...about like a regular 5 pm Mass. It was so nice to have the kneelers out. Now, if we could only get rid of the sign of peace...sigh...

I second the Altar Arrangement. I would love t see it that way regardlss of the Priest's orientation. If you were versus populum and that was up it would obscure the view of the Priest and project from the congregation.

I was/am hoping that the kneelers would become a permanent feature in the center aisle stations now that we've demonstrated a clear preference for receiving that way when we're allowed to.