The first picture is of course Saint Joseph Church in Macon and the second is Sacred Heart Church, now Cultural Center in Augusta. One is for religious purposes the other for secular purposes when it was sold to the Knox family in 1986 having been closed as a church in 1970. Both were designed and built by the same Jesuit brother and Jesuit order of the Southern Province around the late 1800's. Sacred Heart was dedicated in 1900, St. Joseph in 1903: 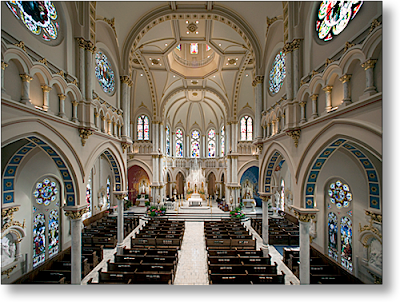 The Former Sacred Heart Church, but now Sacred Heart Cultural Center, Augusta, GA, a secular banquet hall since the late 1980's. The Church was sold by the Diocese of Savannah to the Knox family of Augusta who restored it to be a secular center for banquets, meetings, weddings (not Catholic though) and for any purpose. The restoration maintain all the Catholic character of the building including altars, statues, stations of the cross and stain glass windows. Techincally the Tridentine Mass could be celebrated in this hall at any time as it still appears to be a Catholic Church but now used for secular purposes: 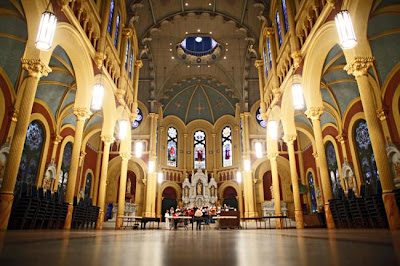 President Obama knows what is best for the Catholic Church when it comes to artificial birth control, so he and his dissenting Catholic minions are trying to make the Church do what her leaders won't, provide free birth control through the Church's self-insurance policies.

President Obama also thinks that women should have access to all the roles that men do and I suspect he believes that women should become Catholic deacons, priests and bishops and one day pope. If he could mandate that through government intervention, I think he would. Maybe he is blazing the trail for some future president to force the issue.

But President Obama certainly has help with dissident Catholics who are more secular than Catholic and whose secular agenda they wish to impose upon the Church. What is interesting is that these secularists want to wipe out Catholicism's theology and doctrines concerning sex, marriage and priesthood, all of which are the apex of the secular agenda that is being driven today by liberal progressives who are dictatorial in wanting their agenda established in Church and state.

The theology of the liturgy surely shows that Christ is the Bridegroom and the Church is His bride. The traditional canopy or corona over the altar, such as at St. Peter's and in modified forms in other Churches, even modern Churches, one thinks of the new one over the ultra modern renovation of the Cathedral in Milwaukee, is a symbol the marriage bed where in the marriage act of commitment and intercourse bride and groom become one and in the Church's liturgy this oneness is from Christ's commitment to His Bride the Church and Her baptismal promises to Christ and the oneness Christ the Bridegroom and His Bride that occurs in the marital act of the Holy Sacrifice of the Mass and Holy Communion.

Since Vatican II, though, the marriage theology of the Eucharist seems to have been neglected and diminished. Of course today there are political reasons for doing so related to same sex marriage and the image of Christ as a male groom and the Church as a female bride (odd to have to have redundant modifiers for bride and groom) which goes against the secular agenda even in the Church to neuter Christ, Church, Bride and Groom, thus opening the door to female priests (although priest is a male term too, priestess the female) and same sex marriage.

Progressives in the Church want to mandate a neutered theology for an inclusive priesthood that is both male and female and same sex marriage that is either female or male in terms of the couple and where there could be two husbands or two wives united in matrimonial bliss.

And guess what the mechanism these liberal, secularized Catholic progressives will use to promote and mandate their same sex theology? Social justice! And they will lay guilt trips on anyone proposing a traditional model of Church, of Christ as Bridegroom and Church as Bride and that marriage must be between one man and one woman for a lifetime and that sex is for both the unitive and pro-creative aspects of the marital act between a man and a woman. Anyone who opposes them is against Jesus great commandments to love God and neighbor and thus traditionalists become marginalized and demonized. How interesting.

Back in the early '80's, I performed a wedding at Sacred Heart in Augusta. It was the wedding of a well-to-do couple from families that actually understood manners and decorum... one of those after-six-grasshopper-jacket-no-white-after Labor-Day-collar-points-above-the-tie-everybody-has-his-own-tux affairs. It was very nice, properly Presbyterian, impeccably done and fun, as well. I remember thinking then, "Why would the Church give this up to be a "cultural center?" I did not know the history, which Fr. MacDonald has since explained. It is really a sad shame that the Church has given up so many of its old Churches to secular use.

As much noise as we are hearing today that seems to be seeking to recover at least some of the past dignity and beauty we need to remember that none of this had much steam until the conflict over contraception and abortion forced the American Bishop's into a corner. Said differently, how many would be even considering EF masses and would be openly encouraging their congregations to vote for the President? I am afraid nearly everyone of them.

You mention "social justice" again. As best I can understand it, social justice means:
(1) Any sex act is ok as long as it is between two consenting mammals.
(2) Illegal aliens should not be questioned, detained, or deported and they should be able to vote.
(3) Abortion should be available on demand.
(4) Drugs are good as long as they are consumed in the privacy of one's own home.
(5) Any species or gender should be able to marry any other species or gender and receive spousal health benefits. This means that the goat or dog you are engaged to will receive their veterinary care free (because normal working people pay for it).
(6) Any minority is qualified for any job by virtue of their being a minority.
(7) A college education is a right no matter how dumb you are.
(8) Welfare checks must arrive on time.
(9) Wealthy people are evil and their money should be taken from them by the government and given to the more unproductive elements of society.
(10) No one should have to work for a living.

One of our pastors has stated in a homily that all jobs should pay a living wage. There is a hearing going on to determine if a town is racist for not having bus stops at a mall when the last two malls with bus stops had such high crime one had to close and the other is the national loss leader for their chains.

Confession, contrition, Purgatory. When those went away so did much of our humanity.

Sounds like we already have a very just society, Gene.
check

rcg - I wonder, in speaking of the Living Wage, did your pastor refer to Quadragesimo Anno which confirms the principle that salaries should be proportionate to the needs of the worker but also to those of the worker's family?

Or to Gaudium et Spes which teaches that "Remuneration for labor is to be such that a man may be furnished the means to cultivate worthily his own material, social, cultural and spiritual life and that of his dependents, in view of the function and productiveness of each one, the conditions of the factory or workshop, and the common good"?

Or, again, Quadregesimo Anno / Gaudium et Spes / Laborem Exerscens which teach that in order to protect the relationship between family and work, an element that must be appreciated is that of a Family Wage, a wage sufficient to maintain a family and allow it to live decently."? (QA 23, GeS 67, LE 19)