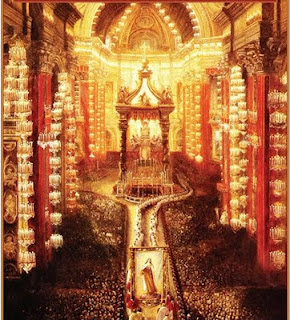 Now deceased Cardinal Avery Dulles puts forward a wonderful defense of the Church in an article he wrote for America Magazine in 2003 responding to some negative press against him. Below are some excerpts. But you can read the full and very excellent article by pressing this sentence.

The Second Vatican Council did adopt a rhetoric of consensus, service, openness to change and inclusiveness. But that rhetoric did little to prepare people for cases in which consensus could not be reached, or in which people did not want to hear what the church was to obliged to preach, or in which ecclesiastical institutions are not subject to change, or in which inclusion would destroy the necessary unity of the flock of Christ. By their tone, if not their content, the council documents exuded optimism and perhaps raised unrealistic expectations. The calls for submission and compliance were so muted that readers could easily overlook them.

In the Western world the dominant liberalism impelled the interpreters to fit the council’s teaching into the prevailing democratic and egalitarian categories. Publicists of [Vatican II], moved by the spirit of the times, often gave tendentious readings to the documents. When they could not successfully twist the texts to suit their own purposes, they appealed to the spirit (or the style) and ignored the letter. They simply assumed that the council could not have meant to say anything offensive to non-Catholic Christians, to members of other faiths or to people raised in a liberal democratic culture. As a result, everything came to be placed on the same level: Christianity and other religions, the Catholic Church and other Christian communities, the hierarchy and the laity, the sacred and the secular. Everything had to give way to... the criteria of “liberty, equality and fraternity.”

I have no difficulty in speaking of the spirit of the council, nor did the Synod of Bishops in 1985. But the spirit should not be driven against the letter; style should not eclipse substance. The council fathers were not starry-eyed liberals. The council documents did affirm the need to preserve the apostolic heritage of faith, sacraments and ministry. To a degree that seems surprising in view of the popular impressions of the council, the council fathers affirmed continuity with the past, including the Council of Trent, the First Vatican Council and the teaching of Pope Pius XII.

Since the council, the popes and the synods of bishops have been laudably conscious of their responsibility to guard the deposit that has been entrusted to them (1 Tm 1:14). They have found the council documents very helpful for that purpose, when those documents are read for their substance rather than their style. At times the Roman authorities have found it necessary to speak more plainly and less diplomatically for the sake of truth and fidelity. Dominus Iesus did precisely that in its treatment of the uniqueness of Christ and of the Catholic Church. The Congregation for the Doctrine of the Faith seems to have learned from hard experience that when you couch unpopular teachings in “polite” language, people easily conclude that you didn’t really mean what you said.

Curiously enough, the most dramatic doctrinal innovations of Vatican II would seem to run directly against the spirit of egalitarianism. No previous council explained at such length the role of Christ as the author of every grace and as the center and goal of all human history. The council affirmed the necessary role of the church as the instrument used by Christ for his entire work of redemption. It repeated the strongest claims of Vatican I for papal primacy and infallibility and supplemented them with a strong insistence on the hierarchical authority of bishops. The council went far beyond earlier magisterial pronouncements in teaching that episcopal ordination is a sacrament that places bishops in a distinct order, and that bishops have, together with the pope, complete authority over the church, under Christ the Lord, to whom they must render an account of their ministry.

Why is dissent so rampant among younger Catholics? An important contributing cause, I suggest, is the reluctance of their elders, both lay and clerical, to challenge them with the hard truths of the Gospel. Misled by a false spirit of accommodation, parents and teachers take the easy path and advise people to follow their own conscience, as though conscience did not have to be formed in light of the teaching of Christ, which continues to resound through the church. In giving this advice they may think they are obedient to the spirit or style of Vatican II, but they are unfaithful to its substantive teaching.
Posted by Fr. Allan J. McDonald at Monday, April 16, 2012

ALSO, and more exciting, is the illustration you chose! It is a rendition of a pre-VII canonization in all its glorious majesty. Just look at how sublime the Basilica looks bathed in that candlelight. Just look at that giant image of the Blessed being rolled down the aisle. If only they would illuminate (this is called the "illumination") of the Basilica for special occasions nowadays.

Now canonizations are boring outdoor events that feel little more than a football game with a bit of sartorial style.