This is Macon, Georgia, but Melbourne, Australia seems to have borrowed the idea! I wonder if they saw this on my blog and had a light bulb moment????????? 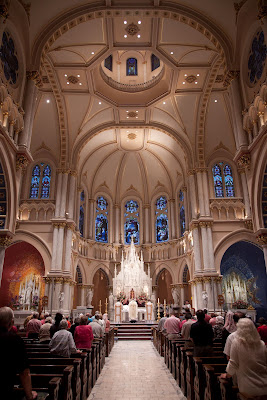 I read this at the Chant Cafe and it sounds strikingly familiar to me! I do have some readers from Australia. Could it be that little old Macon, GA influenced "Down Under?" I report, you decide!

News from Melbourne
Posted by Jeffrey A. Tucker

From The Reform of the Reform:

The promulgation of the new translation of the Roman Missal of 1970, invites us to reflect further on the "hermeneutic of continuity" articulated by Pope Benedict XVI, and the importance of this being demonstrated consistently in the celebration of the Ordinary Form of the Roman Rite.

Beginning Saturday 12th May (at 6 pm), in response to the requests of the Faithful, a weekly Vigil Mass in the Ordinary Form will be offered at St Aloysius' Church which will aim to exemplify "sacredness in continuity".

The Mass will be celebrated in English, "ad orientem" at the High Altar, with both the Propers of the day and the Ordinary being sung. Communicants are invited to kneel at the Altar rails to receive Our Lord on the tongue 'under both kinds' by intinction. Books will be provided containing all the readings, Mass Ordinary and Propers, and music including hymns.

The inaugural Mass, at 6 pm on Saturday 12th May, will be offered for the intentions of Pope Benedict XVI.


I am seriously considering making our 4:30 PM Vigil Mass a "reform of the reform" of the Ordinary Form of the Mass as described in Melbourne. Currently at all our OF Masses, the cantor chants the official Introit after which a Processional Hymn is sung. The cantor also chants the Offertory Antiphon and Communion Antiphon with an additional Communion Chant or song from our hymnal.

All I would change for the 4:30 PM Mass would be the orientation of the Mass for the Liturgy of the Eucharist and allow people to kneel for Holy Communion if they so desire (no one would be forced) by providing kneelers for such. Everything else would be as it is, same vernacular music for the parts of the Mass as the other Masses and same lectors and same altar servers. Is this advisable?
Posted by Fr. Allan J. McDonald at Monday, April 30, 2012

I think it is most certainly advisable.

And at last there would finally be a good justification for the Saturday anticipated Mass :)

Please dear Father do this. As we reap, so shall we sow.

If more priests, and bishops, would do the same this could, slowly, bring about a change in the "norm" from versus populum to ad orientem (versus apsidem).

Sounds wonderful to me, Father. (Although it would be even better with the Kyrie, Pater Noster, and Agnus Dei)!

If I were bilocational, I would attend this Saturday anticipated OF Mass as you propose it in Macon, as well as the EF Sunday Mass I attend in Knoxville

Since, (A.) the faithful have the right to kneel for Holy Communion, and (B.) pastors are morally obliged to make reasonable accommodations for the elderly and others whose bodily limitations require a prie-dieu or altar rail to do so, it may well be that the pastoral circumstances require the placement of a prie-dieu, or installation of an altar rail, for use during the Communion Procession.

Click on oratorymusic.org.uk for a video of a Solemn OF Mass in English with simple propers (Graduale Parvum). Normally the Oratory would have Solemn Mass in Latin, and the main Sunday Mass is now EF, but it shows what can be done with the new missal chants and with limited choral resources.

Father, your take on the prayers at the foot of the altar was what was done 1965-1970. It can be justified by GIRM 42; "Therefore, attention should be paid to what is determined by this General Instruction and the traditional practice of the Roman Rite". Keep up the good work.

What does your bishop recommend?

I don't think it's necessary to drag the bishop in, no. I do think that a good set of catechetical talks in your homilies over the course of the next few weeks would be a good idea, though, should you decide to do this.

Since you are ordained to be one who cooperates with the Bishop in his ministry, it would be appropriate to inform him of your plans and to ask for his guidance, as you have done on other occasions.

No, you don't have to "ask permission," but you should, in my estimation, let him know what is going on in his parish.

All he has to do is consult my blod which has entirely too much info for him! :)

just let us know when it will start!!!!
~SqueekerLamb

I would not ask the bishop. First of all he probably reviews this blog and after his visit to Macon earlier this month I expect he is aware of what your are up to. I would take this as tacit approval. If he is challenged to address it he might not be allowed to answer as you would like.

My, my, my, that unattributed Anonymous poster has a familiar tone to his posts.

Ignotus, don't you have another leftist gun control article to write for the Southern Cross or something?

Oh, God. Don't tell me Ignotus is anti-gun. LOL!! It figures. That is so pitiful...I guess he really believes all those feral minorities he loves so much are gonna' give up their guns jus' 'cause we ax 'em nice. LOL!

Please just let us know when ad orientem and kneeling for Holy Communion will start at the Vigil Masses!!
~SL
This is SO exciting!!!

Please do! There are times I haven't received,because of back issues. Not sure I could get back up without stumbling, and this Mass would be wonderful weekly! My family would attend.

Perhaps this blog, open to all parishioners for their response, provides you with sensus fidelium in support of your proposal?

Well, no one can accuse me of not consulting, but I do need to run things past the bishop about these sorts of things because I do hate yanking people around and then I wonder what happens to these parishioners when another pastor is assigned when I retire from here at the age of 75 and he has a different way of doing things and turns everything upside-down. I would also consult with the pastoral council too. I'm very consultative but also a person who makes decisions and doesn't blame those who I consulted with the decisions I make.

Well I sure hope you stay at St. Joseph's until you're 75. Or death.

Your being so youthful, Fr. McDonald (from my viewpoint) is it not likely that in the distant future when you retire, you are likely to be replaced with another faithful pastor. Certainly, it would be an imprudent bishop who appointed a replacement so imprudent as to turn upside-down the restoration of faith and practice that you have so prudently and carefully nurtured. By now, surely most everyone (from bishop to pew-sitter) knows from the sad experience of recent decades what a pastoral disaster results when a new pastor rashly destroys the faithful practice of a parish.

LOL, Father by the time you retire at age 75 you'll have to explain to some 28 year old newly Ordained priest that what he now does every day wasn't always done that way. He'll be looking at you in disbelief when you tell him; "No seriously, we used to face the people, check out some old movies from that era, you'll see what I'm talking about." LOL

Father McDonald is absolutely right: consult, consult, consult, especially the bishop or appropriate chancery office. Until familiarity with the traditional Roman practices is common among the faithful and bishops, we must take great care in introducing them, lest we unnecessarily delay the long-term Reform of the Reform by our impatience.

Dear Fr, rest assured, your idea was not "stolen". I might very well ask since when is a reform-of-the reform Mass your idea? There are many ad orientem OF Masses around the world. I can promise you no-one here in Melbourne has even heard of your blog. There are also some key differences between this Mass and your Mass. Best wishes and prayers, Tim

Shirley, you jest! The only concern was that, after seeing the Easter Bunny have a prominent role in the German Mass, that Archbishop Hart might have a kangaroo read the Prayers of the Faithful. We were relieved to find he was in a counter reformation mode.

Well now, Tim, you there in Melbourne have obviously heard of the blog...and, we may forgive Fr.'s exuberance at the movement to recover lost Catholic identity in parishes around the globe. It is an exuberant hope that many of us share and I am glad that you in Australia are a part of the movement. Now, don't you have a sheep to catch?

To Tim, my paranoia is just in jest and hyperbole--I have a dry sense of humor! Congratulations on ad orientem--I think it might be the wave of the future, but I'm not clairvoyant, although some think I am! :)