SHOULD WE HAVE A SMALLER BUT MORE FAITHFUL CATHOLIC CHURCH? ARE WE AFRAID OF THAT? IS IT ABOUT FRIENDSHIP AND MONEY THAT WE WANT EVERYONE TO BE HAPPY AND STAY DESPITE THEIR REJECTION OF THE FAITH AND MORALS OF THE CHURCH? HAVE WE BECOME A COUNTRY CLUB CHURCH? 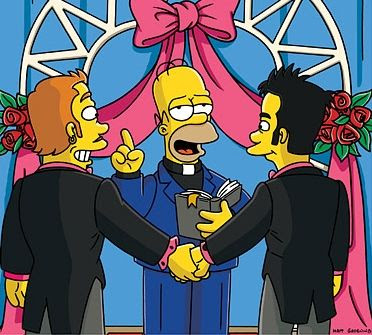 The National Catholic Reporter has this complete article which I have an excerpt below which you can read by pressing this sentence.
Seattle's cathedral parish opts out of signature drive

If the referendum campaign to block Washington state's recently passed law authorizing same-sex marriage makes the state's November ballot, it will not be with any official help of the Seattle archdiocese's cathedral parish, despite Seattle Archbishop Peter Sartain's outspoken support of Referendum 74 and his call for parishioners to bolster its campaign.

My Comments: The complete article shows that the Cathedral's Rector (Cathedrals have rectors not pastors as technically the pastor of the Cathedral is the Bishop) is not supporting his bishop's request to gain signatures of his parishioners to bolster Referendum 74 blocking Washington State's same sex marriage laws.

What is the rector of the Cathedral afraid of? Is he afraid of losing parishioners, being crucified for supporting his bishop (although he says the bishop allows for parishes not to seek signatures) or is he in favor of same sex marriages?

This same rector was very vocal in his disapproval of the new English translation of the Mass and tried to organize a national movement to oppose it; fortunately his initiative failed miserably!

I know of many parents who have children with homosexual tendencies and orientations. I know that many of these parents want their children in stable relationships and not unhealthy promiscuous lifestyles. But asking the Church to condone sex acts (I'm not talking about authentic chaste love between same sex partners, which the Church would encourage if that love is chaste)I am talking about sex acts that are contrary to natural law and the chastity that everyone depending on their state in life are called to express as followers of Christ.

Do we throw our teachings out the window because we have become a Church of "bleeding hearts" who want to enable people to live in sin or enable the Church to disregard the morals of Christ?

We have become a country and a Church of enablers. Many think this is the most loving thing to do and often it is done out of guilt. But the enabling of immoral behavior, sexual or otherwise is not love, it is complicity in sin.

Presumably the rector of the Seattle cathedral parish, who is opting out of his archbishop's initiative, is still the same one who conducted last year the "What if we just said, Wait?" campaign and petition drive against the new translation of the Roman Missal 3/e.

"Rev. Michael G. Ryan has been pastor of St. James Cathedral in Seattle since 1988 and serves on the board of the national Cathedral Ministry Conference."

See what dissent does?

Why doesn't Archbishop Sartain remove the rector? Surely the diocese has a monastic garden that needs tending full time.

If my sons were rebelious and I just let it go, I would be labelled 'negligent.' How can the Church expect the laity to know the True Faith if the Bishop's allow dissident priests to openly work against Her? What is more important, the friendship of the rector, or the pastoring of the flock?

They are riding the tiger. The parish has a substantial and active homosexual contingent that are pivotal in the success of 'ministries'. Heck the only people in our choir that can sing on key have blue and yellow equal signs and 'keep you you laws off my body' stickers on their cars. They are more concerned with appearances than substance.