THE ART OF PARTICIPATING IN AN EXTRAORDINARY FORM MASS: IT IS BASED UPON TRANSLATING THE MASS INTO THE VERNACULAR IN YOUR MIND USING DYNAMIC EQUIVALANCY! 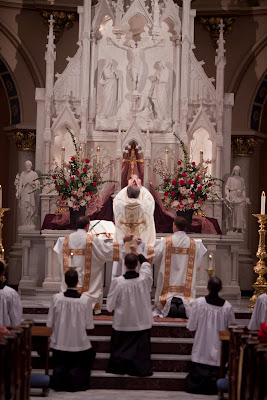 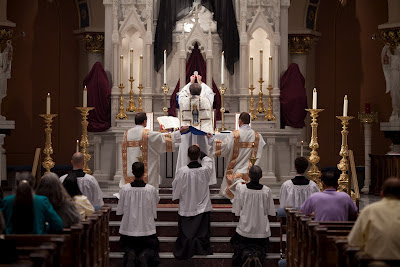 Even in the first grade, Sister Lilian taught us, when we learned how to read, how to use the St. Joseph Sunday Missal. The most important thing was to be able to find the particular Sunday that was being celebrated in the book for that had all the changing parts of the Mass in English: the Introit, Collect, Scripture readings and Gradual, Offertory Antiphon, Secret, Communion Antiphon and Post Communion Prayer.

There are only a handful of prefaces in the EF Mass. In the Sundays that we now call Ordinary Time, the Preface of the Most Holy Trinity was always used, no other choices. Lent had one preface and various prefaces for various feasts and the Blessed Virgin Mary and then there was the common preface for weekdays.

Everything thing else in the EF Mass is fixed, so there is no guess work concerning which option the priest will use at any particular time. There is only the Roman Canon and no other Eucharistic Prayers.

If one was a cradle Catholic and went to Mass every Sunday by the time one graduated from High School, one could have memorized all the fixed parts of the Mass in English or at least knew in your mind the general structure of the fix parts of the Mass especially the Roman Canon. There really wasn't a need to keep your eyes glued on the missal, but rather on the altar.

The light bulb moment for me about how one should participate on the EF Mass came when I read Father Robert Taft, SJ's commentary on the Eastern Rite which I posted below. He said this about ceremony: "But liturgy is not ceremonial. It is prayer. And so these ceremonies are the ritual expression of a text."

That is precisely true of the EF Mass. Not only is the Roman Canon in Latin, it is prayed quietly, inaudibly. The lay person participates in this by watching the "ceremonial expression of the priest, listening to the bells, in order to see the "ritual expression of a text." I think that is marvelous!

In other words, the lay participant at an EF Mass watches the Mass, knowing the structure of the Mass and what does not change, but watches it and understands it through "dynamic equivalency" of understanding the priest's "ritual expressions of the various texts." In other words, put down the missal once you've learned the structure and content of the unchanging parts of the Mass and watch the priest and interpret what he is praying using dynamic equivalency or summary of the written texts in your mind in the vernacular! It's so simple what is accurately called "NOBLE SIMPLICITY!"

You can always study your pew missal before Mass to read over the various prayers, but don't look at it too often during the Mass. Keep your eyes and minds on the "ritual expressions of the texts!"

THE FIRST PICTURE IS THE ORDINARY FORM OF THE MASS AND THE SECOND IS THE EXTRAORDINARY FORM OF THE MASS. NOW COME ON, IF YOU HADN'T SEEN THESE PICTURES IN EARLIER POSTS, WOULD YOU HAVE BEEN ABLE TO TELL THE DIFFERENCE? AND THUS MY POINT IN ASKING THE QUESTION: SHOULD THE HERMENEUTIC OF CONTINUITY BE MANDATED TO ASSURE THAT THE TWO FORMS OF THE ONE ROMAN RITE LOOK ALIKE SO THAT THERE DOESN'T APPEAR TO BE ANY RUPTURE IN HOW THE ORDINARY FORM WAS REFORMED FROM THE EXTRAORDINARY FORM LOOK AND THAT EVERYONE KNOWS THAT THE TWO FORMS CELEBRATE THE SAME SALVATION EVENTS?
Posted by Fr. Allan J. McDonald at Sunday, April 01, 2012

Of course the first one is the OF. Altar cards give you away every time. :D

Darn, I was hoping you wouldn't see those!

Both masses were quite beautiful. Although I must say I wish you could combine the image of the corpus of the first chasuble with the shape of the second chasuble. Fiddleback with Jesus on it? Yes!

Father, you need to go work at the CDWDS, now de facto just the CDW.

To answer your question, Father, YES!!! I sense that I'm seeing a slow movement in that direction, in some places--my parish would be one. In other places (not so far away in this Diocese) it's still a 1970's-80's liturgical wasteland!

This is why the Church so desperately needs the liturgical mandate you described in this post! At the rate we're going now, I question whether I'll live to see it happen in the way that you describe.

I concede that most people cannot tell the difference between the Novus Ordo (properly celebrated) and the Tridentine Mass. That, however, is to the same of the last few generations of clergy. People should be educated so they know the difference - and there is still a tremendous difference. You can say the Novus Ordo ad orientem and have Communion kneeling, but there are still grave theological problems with it.

Don't get me wrong, I support every initiative to bring it in line. But, I just hope this is a stop-gap measure that will ultimately lead to a return to the beloved Tridentine Rite.

Cardinal RATZINGER in 1998 told Traditonalists that the New Order celebrated in Latin ad orientem with Gregorian Chant would be indistinguishable to most traditionalists. He also stated that there is no rubric in either form of the Mass saying that the Mass cannot be celebrated facing the people at a free standing altar. At a free standing altar a priest faces it on either side of it. This pope Benedict models facing God by placing the crucifix facing the priest when the priest faces both the people and congregation at the same time. This has always been the case at the basilicas of Rome. There I'd no doctrinal difference in either form of the Mass, to teach otherwise is Heresy.

There is no doctrinal difference in either form of the Mass, to teach otherwise is Heresy.

Wrong. There are doctrinal differences between the Rites of the Mass. There is, however, the same offering being made at both Rites. To teach otherwise in that respect would indeed be heresy. However, to fail to recognize that there are theological problems with the Novus Ordo is to stick one's head in the sand. Even Cardinal Ratzinger recognized that.

To the former point of your comment, just because Cardinal Ratzinger doesn't think Traditionalists couldn't tell the difference doesn't mean it is true. I am certain most Traditionalists I've met would instantly spot the difference. Surely the lack of the prayers at the foot of the altar right at the beginning would give it away, the triple Kyrie instead of the nine-fold shows a change, having three readings is changed, bowing at the Credo instead of genuflecting, the Canon being read aloud would be a great indicator, the demolished offertory (which the people could now hear), no ablutions at the altar in most places, no differentiation between Priest's and people's Communion, no last Gospel, no subdeacon, priests presiding from a chair instead of standing at the altar, no asperges at High Mass, no birettas, no maniples, no relics at the Altar...

And none of those things I've mentioned have anything to do with the language used or the direction the priest faces... belive me, Traditionalists like myself have studied this more than most priests have. We would notice the difference.

Again, I'm not saying the Novus Ordo is bad (in itself) or invalid. It is, however, different than the Tridentine. That cannot be denied.

Let me be clearer, I believe the traditional EF Ambrosian rite uses the current OF's offertory Prayers or maybe it is Miland's rite where pope Paul was cardinal. Any legitimate roué, east and west have the same dogma and doctrines concerning the essentials of the Mass. What legit stele differs are theology of participation, lectionaries, order and stle of prayers, music and type of spirituality.

Sorry for the typos aboveL, using iPhone with its horrible auto spell change that I didn't notice

Rubrics are not doctrine. The are a form of legislation and, as such, are subject to change by competent authorities.

"Cardinal RATZINGER in 1998 told Traditonalists that the New Order celebrated in Latin ad orientem with Gregorian Chant would be indistinguishable to most traditionalists."

So what if our beloved Holy Father, now so gloriously reigning as Supreme Pontiff and Vicar of Christ on Earth, was not personally infallible before he became Pope. (No is he or anyone else as pope.)