NOW THIS PRIEST KNOWS WHAT HE IS TALKING ABOUT

Who are the ones who are most opposed to the "reform of the reform" today? It isn't young people longing for the good old 1960 and '70's. It is priests and religious who spearheaded some of the mindless excesses of the 1960's and 70's who now are in their 60's, 70's and 80's who are having the hardest time. The priest in this video states with a great deal of truth that the silliest of the changes in the Church of the 1960's and 70's was fomented not by the laity but by priests and liberal women religious (sisters). Also compare his thinking and theology to the Easter Bunny Mass below this post. You may not agree with everything here, but he does have a historical perspective.

And somewhat tied to this video is this post from Rorate Caeli, The Abandonment of the Cassock: The Primary Cause of Decay in Ecclesiastical Life which you can press here to read there.

These are the Sisters of Saint Joseph of Corondelet of Saint Louis as they were dressed when they taught me in the late 1950's and early 1960's in Atlanta and Augusta (In Atlanta, St. Anthony School of the 1950's had about 150 students in grades 1 thru 8 and about 9 sisters living in the convent to staff the school and even more sisters in the convent in Augusta at St. Mary on the Hill School!: 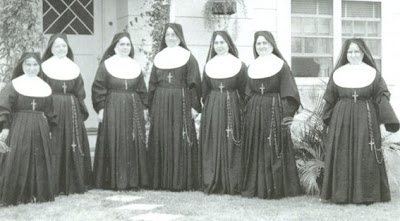 This is how they look today(I was particularly shocked when I went to a formal hospital fund raising gala in the early 2000's in Augusta when two of the sisters of Saint Joseph arrived in the ballroom wearing sequined evening gowns. Fortunately very few there knew they were sisters: 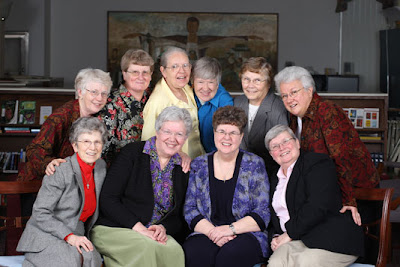 Our Polish Parochial Vicar, 28 year old Father Dawid Kwiatkowski wears his cassock everywhere. I have never worn the cassock except when I was the Master of Ceremonies and only for liturgical reasons. I've never worn it as street clothes even around the parish but I do wear my clerical clothes most of the time.

I find that when I go to restaurants with Fr. Dawid that no one blinks an eye, and we're talking about the Protestant South where the majority of patrons in the restaurant are not Catholic. The teenagers like the fact that he wears it as do many other people. In fact, it would be odd seeing him wearing anything else.

In terms of our Protestant southern culture, historically they appreciated nuns in habits too (many Protestants have historically used Catholic schools even in pre-Vatican II times in the south) and even to this day they are dismayed that Catholic Sisters no longer wear the full habit. In fact, because of their teaching ministry in Macon the Sisters of Mercy of another period who wore the full habit did more for ecumenicism then any ecumenical prayer service held once or twice a year after Vatican II has done. In Augusta, the Sisters of Saint Joseph when they were able to staff their hospital with large numbers of sisters in full habit (the hospital sisters always wore white, and in the south the teaching Sisters of Saint Joseph of Corondelet would always change to the white habit for June, July and August and this was a source of anticipation for many lay Catholics back then) and these habited sisters did more for ecumenism in their full habits than any other thing we've done since Vatican II and this was in pre-Vatican times!
Posted by Fr. Allan J. McDonald at Saturday, April 28, 2012

Yes, it's simply a fantastic video. I'd love to see an extended interview with him. His views, I think, are quite in line with those of my generation.

By the way, Father, you sure must wake up early!

ytc, find an FSSP parish and attend a mass there. Maybe a retreat. You'll hear loads of this. These guys are modern capital 'E' Evangelists.

The local FSSP priest, also Polish, came to the local Deanery meeting. All were in polo shirts and jeans except the young FSSP priest wearing his cassock. It strangely put them off and he is not well received among them for some reason. I have also never seen a chubby FSSP either. There may be some, just I have not seen them. He runs the police basketball league in a poor part of town. Very manly fellow.

The video is wonderful, but the rest of the posts about habits and cassocks much more so. We must reclaim Catholic Identity. We must be in this world but not of this world. Cassocks and Habits are beautiful silent witness to the world.

Fr., I think you should wear a cassock, as well, because I believe it makes a statement that you seem to want to make.
When I was a protestant, Catholics were always considered very devout and the nuns and Priests were held in a bit of awe because of their visible daily statement of the Christian life. Despite theological disagreements and the often misguided anti-Catholic sentiment from prot pulpits, there was always a sense (more or less well-defined) that the Catholic Church was onto something we were missing. There was also a power (Presence, if you will)in those Priests and nuns that even the most devout Protestant minister could not reflect.

Now, when I see Priests running around in street clothes and Margaritaville T-shirts and nuns looking like they just stepped out of a meeting of the Daughters of the Eastern Star, I shake my head and think, "what fools, they do not know what they are giving up."

Could we make an argument that these mod clerics are sinning by tempting the laity to fall, that they are sowing doubt and despair? Is clerical sloppiness a sin of sloth?

Sorry to double post, but found this article shortly after the first and thought it would be of interest here.

"The Shepherd, the Wolf, and the Hireling"

This sums up my view of the deeply committed Spirit of Vatican II clergy. The flaw is that they ca lead you farther astray and into more dangerous territory through foolishness.

Our TLM priest, who wears his cassock absolutely everywhere, was a finalist one year in the diocesan tennis tournament. The diocesan newpaper reported that when his name was announced, he sprinted onto the court wearing his cassock as usual, and then to wild cheers, removed it to reveal black tennis shorts and shorts.

Everything that was stated about young people could also be applied to converts like me. I too left the watered down, ever changing views of protestantism to cling to the Church built upon the solid rock of Peter.

When it comes to dress, we lay people also have a role to play. Yes, we want to see the religious back in their cassocks and habits, but we also need to dress appropriately. Dress clothes with MODEST necklines and hemlines should be the norm. A mantilla is a billboard that states 'I'm Catholic' very clearly. Signing onesself before meals or while passing by a Catholic church is also a wonderful silent witness.

Coincidence? just yesterday I had a thought out of the blue of you donning a cassock...(it seems consistent with where the Holy Spirit appears to moving you...IMHO...)
and what good and holy effect it could have upon the sheep in your care..then woke up this morning to this blog

Perhaps it's time for all of us who enjoy this blog to seize our Catholic identities more completely...food for thought and subject for prayer...at least for yours truly that is.

Now that I recall it, our good Father warmed up in his cassock, and those who know him well probably assumed he would compete with the championship that way. It was when he was announced for the actual match that he stripped off the cassock with a flourish to reveal his black shorts and black T-shirt.

The most remarkable feature of the Fr. Kramer video is that it was produced by the Catholic News Service (CNS) of the USCCB (U.S. Catholic bishops). Even more remarkable is the full article it accompanied:

Just a year or two ago, I would found it hard to imagine such a CNS article so sympathetic to the TLM. The times, they are indeed a'changing!