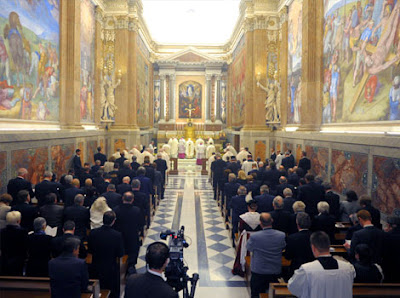 The more I think about it, the more I realize that the Holy Father and his successors will more than likely make some changes to the OF Mass so that it does not portray a major rupture as a reform of the Mass that we now call the Extraordinary Form or the Ordinary Form of the Mass until the 1962 Roman Missal.

I don't think subsequent reforms will be all that dramatic, but my light bulb moment this morning has to do with what I wrote in another post earlier this week. The Penitential Act should clearly be seen as a "prelude" to the actual Mass, but integral as a prelude and it should be seen precisely as penitential in order to acknowledge our sins so as to celebrate the sacred mysteries. Before we enter into the Holy of Holies which is where the altar is and also in terms of the Sacred Mysteries, the Mass itself, everyone, clergy, ministers and other laity should seek God's purification of the taint of sin and seek God's merciful cleansing. Only then should we enter into the Holy of Holies, that is, where the altar is and the actual Mass itself. Therefore, the priest should not approach the altar to kiss it and incense it (if used) until the Penitential Act is complete.

These are my humble recommendations:

1. The Penitential Act become the Penitential Prelude at the Foot of the Altar which would begin with the priest making the Sign of the Cross and skipping the greeting and going directly to the introduction to the Penitential Act and using exclusively the Confiteor as he bows and all others kneel. After the absolution he ascends the altar, kisses it (and incenses it if used) and afterwards goes to his chair. If a choir or cantor is present, the Introit is sung as the priest approaches the altar to kiss and incense it. Or if a spoken Mass, a lector could lead the Introit or the priest could recite it at his chair after kissing the altar.

2. Then the Kyrie is said or sung

3. Then the Gloria is said or sung if prescribed.

In a sung Mass, a good, doctrinally sound hymn that ties into the Mass of the Day or the Scripture readings could accompany the procession to the altar but it would conclude after the priest arrives so that he might lead the Penitential Prelude at the Foot of the Altar. The Introit would always be the official Introit for the Mass and chanted in Gregorian or Polyphony modes, simple or complex. In other words, the laity don't necessarily have to sing it unless they are able to do so, therefore, they are not forbidden to chant it with the cantor or choir.

Making the simple change in the Order of the Ordinary Form of the Mass as I suggest above will solve a multitude of problems.

Please remember in your prayers Father Cody Unterseher, an Anglican Priest, who contributed at the Praytell Blog who died as a result of an aneurism he had over a week ago. He had commented on this blog a couple of times and responded to me at Praytell in very kind ways. Eternal Rest grant unto him O Lord and let perpetual light shine upon him. Comfort his family and friends. Amen. These are two photos taken from his hospital website and tell you something about the Anglican Liturgy that we Catholics should recover. Can you name them: 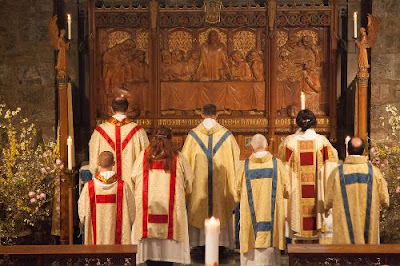 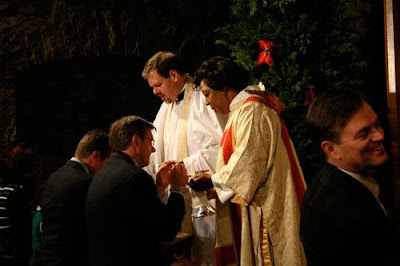 Can anyone tell me what liturgical purpose the priest's Greeting serves. It always seems to me that it dissipates any aura of sacrality that has been established by the introit and sign of the cross. Even if it's not so crass as "Good morning, folks"--always the tip-off that the ensuing Mass will be one to offer up as redemptive suffering.

More generally, the presence of a Greeting in the norms reflects a view of the celebrant as gathering community rather than offering sacrifice. Thus a Greeting is given by a "presider" (a term I will not use except in quoted} rather than by a priest.

Moving the greeting to the beginning of Mass has opened the door to the additional banal greetings and slap you on the back hosptiality. The traditional place (which I might add the Episcopal Liturgy maintains) is to have it before the Collect. I think in the EF Mass it was to remind the cleric that the congregation is involved in the Liturgy and to include them in the Collect, Gospel, offertory, preface, Post Communion, and dismissal.

I'm unsure what you mean, not being familiar with any such "greeting" in the EF Mass.

Dominus Vobiscum (The Lord be with you).

1) It will allow the people to sing a hymn at the procession or the organist to play something, thus preventing them from complaining, "YOU DON'T LET US PARTICIPATE ANYMORE YOU EVIL VATICAN II HATING PRIEST!!!!"

2) It will mandate the singing of the Proper Introit.

And it will do these things in harmony with one another. The Introit is supposed to be sung while the priest is ENTERing (thus INTROit) the sanctuary. The Introit is not a processional hymn or song. It is a song that covers the ritual action of the entering of the sanctuary, which of course is far more complex in the EF. If this ritual action, the Prayers at the Foot of the Altar, is to be restored in some kind of way, then the Introit should be sung while this is being done.

Then we run into another problem: where is the "participation" in this Prayers at the Foot of the Altar if the Introit is being sung over it? My solution: when the priest imparts the Misereratur (or the Indulgentiam, God willing!), he can turn around to make the sign of the cross, at which point the people will clearly see him so that they can cross themselves! Problem solved!

"The Lord be with you" tantamount to "Good morning, how'ya doin'"?

On one level, very funny. On another, not. One is sacral, the other is not. Ditto for the usual EF celebration vs. the usual OF celebration.

These are two photos taken from his hospital website and tell you something about the Anglican Liturgy that we Catholics should recover. Can you name them:

"One is sacral, the other is not."

Henry, that is almost verbatim the explanation our now resigned pastor offered to the people regarding the correction of the response to: "And with your spirit."

He did elaborate; I'm not sure how many in the pews would have understood sacral.