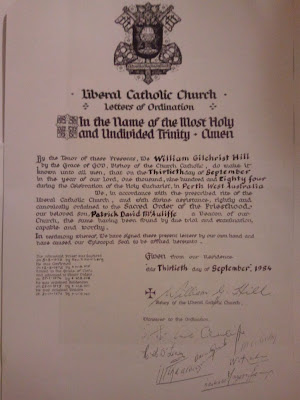 As I have written in other blog posts, "Monarchy" is the battle cry now of progressive liberals in the Church. If only the Church would become more democratic, then the truth would come out and we would have Utopia.

The more I read about what progressives want to do to remake the Church in an ecumenical image of liberal Protestantism the more I realize how the Holy Spirit is working through Pope Benedict and our bishops. The Holy Spirit picked the right man for the job!

What progressive Catholics especially in liberal religious orders and in academia want is what liberal Protestant Communions have already done--move the Church to embrace pro-choice politics as it regards abortion but not the death penalty, to accept same sex marriage and homosexual sex as on an even par with heterosexual sex and marriage and to abandon natural law and the authority of the Church in the areas of faith and morals as understood for centuries now, since the Council of Nicea.

In an article in the National Catholic reporter, Sister Simone Campbell "said she thinks there is a culture clash between the sisters and members of the episcopate who don't understand the nature of U.S. political discourse, referring to LCWR's support of health care reform and whether it played into the Vatican's order.

"The irony is that we who exercise a democratic right, which Catholic social teaching makes very clear we're supposed to do, would be questioned by a canonical organization," Campbell said. "Does that mean all political, democratic activity is to be limited by bishops?"

"The church is not used to a democratic culture, which leads me to think that the real fight is about the inculturation of our faith into a democratic culture," she continued. "Because the culture in Rome is a monarchy, and in a monarchy, you can control what everybody says. But in a democracy, we experience the truth, and it's found when we have questioning and vigorous debate. And in the end, truth emerges."

"The deep value for me in our culture in the United States is that we work hard to value everyone's contribution," Campbell said. "We're not perfect. We've got a long way to go. But it's really a key piece of who we are, that we struggle to have everyone's voice involved."
Posted by Fr. Allan J. McDonald at Tuesday, April 24, 2012

Thank God for priests like Fathers McDonald and Kwiatkowski.

We need a Pope that makes Julius II look like John Paul II...LOL!!

Gene, I was thinking that this morning!

Oh, what it would be like to hear, "Annuntio vobis, gaudium magnum! Habemus Papam! ... Qui sibi nomen imposuit Iulius Tertius!"

" But in a democracy, we experience the truth, and it's found when we have questioning and vigorous debate. And in the end, truth emerges"

Herein lies the problem- they have yet to discover the truth. They will continue to wander around in the dark until they discover that which the rest of us already know-
that the Truth has a name, and His name is Jesus Christ!

The "rest of us" may know the the Truth of Jesus, but those yet to come do not. It is the Church's task to make that Truth available to them.

The structures of our late modern world make it difficult to recognize Truth. This is but one of the "signs of the times" that the Father of Vatican II told us to pay attention to. Uncertainty is a feature of this late modern world and is an experience known(in varying degrees) to all.

The quote I mentioned above was by Sister Simone Campbell, a Catholic religious sister, someone who is supposed to have taken vows to be espoused to the truth, Jesus Christ! She is supposed to be proclaiming Jesus Christ as the Way, the Truth, and the Life- not looking for truth in pagan religions and democratic committees. Her proclamations are examples of the secular left, NOT Catholicism.

I become suspicious when people begin capitalizing "truth" and speaking of it as if it were a category into which Jesus happens to be included. Theologically, any discussion of truth outside Christology is Gnosticism/humanistic idealism.

Carol is correct. The Church is not a democracy; it is not a philosophy seminar where people are encouraged to go search for some nebulous "truth" by questioning everything. That would be one of the advanced philosophy courses on the 17th Century Rationalists, particularly Descartes. In the Church, right belief, right worship, and obedience lead us to the one truth, which is Christ Jesus.

Carol - I understood your quote. I was pointing out that, as Western culture has evolved and changed, the way people come to know the Truth also changes. In our late modern world there is a strong hermeneutic of suspicion, a la Marx and Freud, that makes it difficult for people to acknowledge Truth or certainty.

Our presentation of the Truth, therefore, must take this into account.

Our presentation of the truth should be straightforward and truthful, NOT dressed up in the trappings of other religions and secularism. To do so would be to LIE.

Ignotus, So, just how do people come to know this Truth you are talking about? Oh, and what is this Truth? If you are talking about Christ, then I fail to see how anything has changed about how people come to know Him. Would you please explain what has changed about how people come to know Christ.
Now, if you are talking about some other kind of Truth, then what is it? If it is scientific, then nothing has changed about observation, hypothesis, experimentation, theory. If it is some philosophical truth, then the process of logic has not changed. We may have a new range of variables with which to work, but the process of learning remains the same...
But, I am curious, theologically curious, about the new ways in this modern world we may come to know Jesus. Is it through computers? Quantum theory? Systems theory? Astrophysics?
And how do Marx and Freud make it any more diffcult to acknowledge Truth (that is, Jesus, I guess you mean) than, say, Hume, Kant, or Hegel?