IF RATS, ROACHES AND KILLER BEES AREN'T ENOUGH, NOW THERE ARE "THEM!" THE CICADAS! 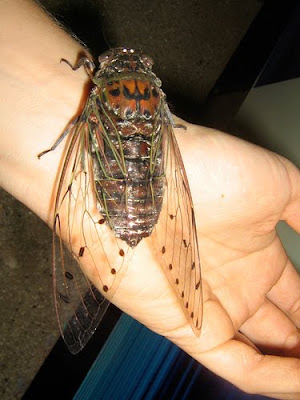 What have I done to deserve all these vermin? Answer me!

The name is a direct derivation of the Latin cicada, meaning "buzzer". Some cicadas produce sounds up to 120 dB (SPL)[11] "at close range", among the loudest of all insect-produced sounds.[12] This is especially notable as their song is technically loud enough to cause permanent hearing loss in humans, should the cicada sing just outside the listener's ear

As I returned to the rectory this morning, I was attacked by a cicada! After 13 years of being buried in the ground, they have emerged by the millions to do their thing and their offspring will go away for 13 years and emerge.

MILLIONS OF THESE EMERGE THROUGHOUT MACON AND ALL OF GEORGIA! THE ONE WHICH ATTACKED ME THIS MORNING!THEM!CLICK ONCE OR TWICE ON PHOTO TO ENLARGE! 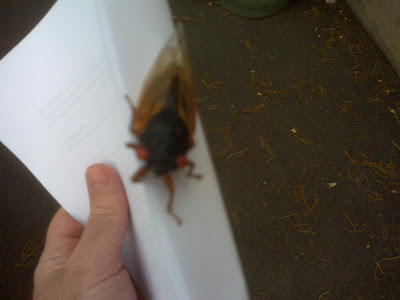 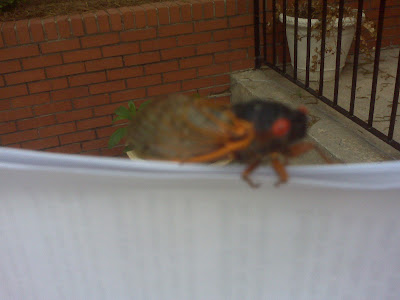 They make a deafening sound that sounds like the giant ants in "Them!" It is almost like an electronic sound, but it is THEM!, CICADAS!

At about minute 2:30 you'll hear what the CICADAS! sound like!

Cicadas have a long proboscis under their head that they use for feeding on tree sap, and if they attempt to inject it into a person's body it can be painful, but is in no other way harmful. This sting is not a defensive reaction and should not be mistaken for aggression; it is extremely uncommon, and usually only happens when they are allowed to rest on a person's body for an extended amount of time.
Posted by Fr. Allan J. McDonald at Tuesday, May 10, 2011

I hate when they smash into my windshield and I hate that sound. Sounds like an alien space ship is in my backyard.

The robins in my yard are feasting on these critters.

They are not as bad as democrats. Democrats swarm every four years and never shut up! Cicadas cannot destroy the entire country, whereas democrats have made a good start at doing it. Plus, dems want us to pay the clean up costs, the costs for maintaining them, and pay them to reproduce!

They taste great. We had our septannual (is that a word?) infestation and I discovered there are loads of recipes on the internet.

Fr, that is his nice.

Y'all owe me a new keyboard... just spewed my drink everywhere.

Pinanv525 What’s wrong with comparing two species of bugs? Comparing one bug to another is quite appropriate. Both of the species you mentioned make an incessant noise that bugs one, particular the falsetto, fatuous fables foisted upon us by the leader of the humanoid species’. Hopefully the TV manufacturers will lengthen the warranties on their remotes, particularly the mute button.