SOME THINK WE NEED TO CREATE A NEW THIRD FORM OF THE MASS, I SAY NO, NO, NO!

This is an Ordinary Form English Mass in London. Just doing this with the current Mass would go a long way in authentic renewal in the Church: 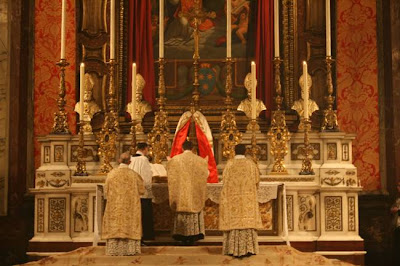 READ THIS ARTICLE ABOUT CREATING A THIRD FORM OF THE MASS BY PRESSING THIS SENTENCE!

The author of the article says that it is very difficult for many people to follow the older form of the Mass, the EF form because of the Latin and so many prayers are prayed silently. I agree! For the most part, I think the vast, vast majority of Catholics like the vernacular, but I think they would like the EF Mass in English too and would be drawn to it if they could understand and follow it better.

But we don't need to create a new form of the Mass, we need to reform the OF Mass so that it looks and feels more like the EF Mass. This should become the new OF Missal.

1. Celebrate the OF Mass ad orientem,but allow for all vernacular, except maybe the Eucharistic prayer, keeping it in Latin.

2. Allow the traditional prayers at the foot of the altar to become an alternative to the penitential rite.

3. Re-complicate the rubrics as in the EF Mass, including all the genuflections, kissing of the altar when turning from it, greetings in the EF position, rather where they are in the OF Mass.

4. In line with rubrical changes, return to the choreography of the EF Mass for the OF Mass of the altar servers and priests and deacons.

5. Kneeling for Holy Communion, reception on the tongue and wider use of intinction, for every Mass if one so desires.

Simply doing this and keeping the OF Missal with all of its added prayers, prefaces, Masses, lectionary and order would be a wonderful hermeneutic of reform within continuity of the previous Mass. Keep the revised calendar too, simply return the season of Septuagesima and ember days and rename the two segments of the calendar currently called Ordinary Time to Time after Epiphany and Time after Pentecost.

We don't need to tinker too much with the OF, just do what I suggest. You know I'm clairvoyant, but maybe I'm not.
Posted by Fr. Allan J. McDonald at Friday, May 20, 2011

This would be great! I hope and pray it happens in my lifetime!

My reading skills must be slipping. Couldn't we just as easily say "re-authorize MR65"?

Well, I've also recommended in my clairvoyancy that we keep the OF Missal in English and simply offer it in the EF Form, then you do keep all of the prayers, calendar, lectionary etc. just have the ef form.

That makes too much sense. I am confounded as to why it wasn't like that it in the beginning.

The 1965 vernacular Missal was a very good translation of the Latin 1962 missal into English. The only adaptations I am aware of in the 1965 missal was eliminating Psalm 42 from the Prayers at the Foot of the Altar (which was done anyway in the Requiem Mass)a slight revision in the rubric of the "Through Him, with Him... It also eliminated the Last Gospel, which was already the case with the Requiem Mass.
The current OF Missal is not an English version of the EF Mass as new prayers were developed and became "more positive" meaning that prayers against Satan and his power were eliminated. I personally feel that the OF Lectionary is wonderful and shouldn't be tinkered with too much and it is a vast improvement over the EF which for daily Mass is abysmal.

It occurs to me that the problem in all these discussion of what the OF ought to be is that the phrase "the ordinary form" refers more to a legal fiction than to an actual liturgical rite. Which seems apparent when you see two altogether different photos and the seemingly absurd claim they were taken at the same form of the Roman rite.

One of the authors in the Fontgombault (Liturgy with Ratzinger) conference proceedings asked whether the Novus Ordo exhibits the stability of practice in time and space that a genuine liturgical rite must display.

If it looks different at different times and places, how can one talk meaningfully of what it is, and then of whether or how it ought to be changed? Changed from what?