IS THE LATIN RITE GOING TO HAVE ONLY ONE FORM OF THE MASS IN THE FUTURE? SOMEONE HIGH UP THINKS SO. IS HE CLAIRVOYANT OR MAYBE NOT? TIME WILL TELL!

Sunday's EF Mass at the Altar of the Chair, behind the grand papal altar! 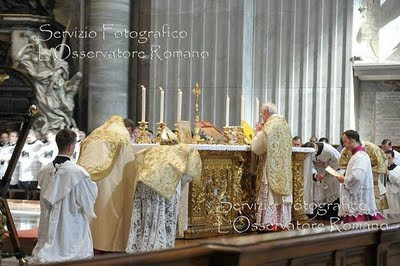 Receiving Holy Communion kneeling, a sign of things to come even in the OF Mass and the new one Roman Missal of the future? 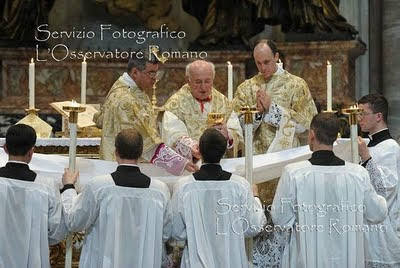 The pope's long-term aim is not to allow the old and new rites to coexist, but to move toward a "common rite" that is shaped by the mutual enrichment of the two Mass forms, Cardinal Kurt Koch, president of the Pontifical Council for Promoting Christian Unity, said May 14.

As you know, currently with Summorum Pontificum, the Holy Father has written that there now exists two forms of the one Roman Rite, the Ordinary and Extraordinary.

But Cardinal Kurt Koch speaking about Summorum Pontificum states that Pope Benedict's overall plan (Marshall Plan) is to eventually allow enough time for a new Missal that in my words combines the best of both and returns the Latin Rite Church to one Roman Missal!

It doesn't take too much clairvoyancy to see the future in this regard. Just watch how the Holy Father celebrates Mass in the Ordinary Form since as Pope he has never celebrated the EF Mass:

1. The altar is decorated in the traditional manner.

2. While he does face the people in most of his celebrations of the Mass, he has also celebrated ad orientem showing that this is perfectly acceptable too!

3. He celebrates the Mass in the vernacular in Italy and on his travels, although in Rome sometimes for international events it is all in Latin. However, and this is to be noted, even when he celebrates the Mass in a parish Church in Rome, his more recent (last four years) custom is to always pray the Preface and Eucharistic prayer in Latin, although he does not confine himself only to the Roman Canon.

4. He distributes Holy Communion to communicants who are kneeling and they must receive on the tongue. For special occasions he intincts the host into the Precious Blood. (In Rome at St. Peter's even concelebrating bishops when they go to the altar to self-communicate, they take the host which is in the ciborium and dip it (intinct) into the chalice of the Precious Blood, they don't drink from the "common chalice."

5. I think the current lectionary will remain maybe with some revisions and adding the EF's one year cycle for Sunday as a 4th year, Year "D."

6. The Roman Calendar will be slightly revised to include the three Sundays before Lent called the season of Septuagesima, and to return to ember days and the season of Pentecost with an Octave for Pentecost.

Those of you who are clairvoyant, but maybe not, what do you think the new Roman Missal will look like? Fr. Z thinks it won't happen even in his lifetime and I think he's in his 50's. When do you think it will happen?

This is the Mass this past Sunday at St. Peter's Basilica at the "Altar of the Chair" which is directly behind the Papal altar. I've concelebrated Mass on this altar, but facing the people and without notice an altar boy shoved a microphone in front of me so I could say part of the Eucharistic Prayer (# 3) in Italian! I did it rather well, without having practiced ahead of time and despite the fact that I've never had a formal education in Italian, especially reading it! God's grace kicked in!

I like the High Altar at SJ. Is there ever a time when you can use that and not the new altar (what is the new altar called?) Can we ever get rid of the new altar and just use the high altar? In a regular OF do you think you will ever face ad orientem?

The donor wouldn't be happy and the current legislation for new altars is that these be free standing--keep in mind the papal altar at St. Peter's is free standing and it is ancient. On top of that it would not please the donor who gave it as a gift to the Church and in memory of family members! It would look odd to celebrate Mass on the old altar (from the congregation's vantage point) with the new altar in front of it.

I do see facing ad orientem as a possible option, but I would never do it without our bishop's prior approval and explaining and teaching the people why we are doing this. If it were to be an option at St. Joseph, I would see it at only one Mass.

Considering that the Pope desires and organic development of the Mass, I think a range of 50-100 years from now is about right. I think the Mass will ultimately evolve into the NO as it exist beginning this Advent, except the Altar will be move back to it's rightful place; all masses will be ad orientem; and communion will be on the tongue kneeling.

Father, maybe you can help me with this. I'm OK with both forms of the Mass, but for any "organic development" to take place between the two rites, one of two things has to happen:

2) The Vatican will legislate a "combined" form. That has already been tried once, by the Consilium, and the results have been rupture and disorder.

How can this "mutual gravitational pull" of the two rites take place without either committing liturgical abuse or creating something out of both by papal fiat?

That is a very good question and one that I've thought about too! I don't know how this organic development will occur. I do know that since I've started celebrating the EF Mass, I'm more concious about how I celebrate the OF. Since the OF has almost no rubrics about the use of the pall, I've incorporated the EF's rubrics into the OF for it's use.
All I can say is that we can watch how the Holy Father models the OF Mass. However, he hasn't modeled for us the EF Mass--that would be interesting!

Yes it will eventually have one Rite and I agree with Fr Z that its not likely in my life time (Im'm 49). I don't plan on waiting. I will relocate in about 7 years and it will be to a Diocese that is more supportive of Tradition and the EF. Leading candidate is currently Konxville in East TN.