"The Bridegroom Cometh" This is the traditional iconography image of Christ the Bridegroom of the Church which is His bride: 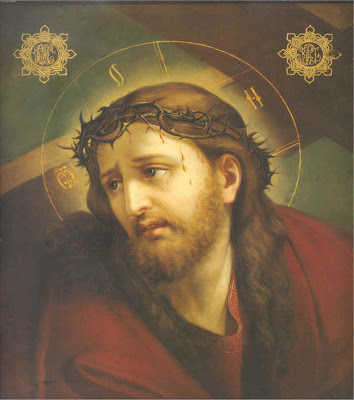 This is the "spirit of Vatican II" watered down version of the same: 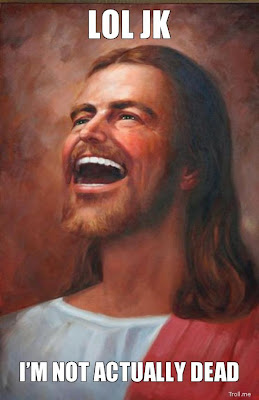 When I was assigned to St. Teresa's Church in Albany in 1980, we were in the midst of renovating a church building built in the mid 1950's. Rambusch out of New York was the consulting firm. Of course the desire of the consultants was to bring the altar out into the congregation and to have seating on three sides of it. On paper it looked nice, in reality it was a debacle.

One of the things that was suggested and almost passed although I vehemently objected and finally persuaded others to reject was the removal of a large crucifix over the altar in the sanctuary. Rambusch said that the crucifix was "Pre-Vatican II" and that the trend today (1980's) was to replace it with an empty cross or the "Risen Lord" on the Cross rather than the crucified image.

What do the two images of Christ the Bridegroom (and removal of crucifixes which is iconoclasm) suggest to you? How does it shape our understanding not only of Jesus Christ and His relationship to His Bride, the Church, but of how we understand the Church and ourselves who are baptized comprising the "Bride of Christ?" Just wondering.
Posted by Fr. Allan J. McDonald at Saturday, May 28, 2011

I worship in a parish where the risen Christ is almost the only image they approve. When the pastor installed a life-size crucifix over the altar a couple of years ago, many of the RelEd folks threatened to quit. I wish...

It's interesting that you focus on Christ as the Bridegroom. I think you are exactly right that we all picture Christ as a happy groom on the day of his wedding, and, sadly, even Catholic weddings often degenerate into raucous, out of control events where guests (and even wedding party members) get drunk and make fools of themselves.

I was looking in my daughter's Baltimore Catechism (St. Joseph Edition, Official Revised Edition 2) and found this in Chapter 35 on Matrimony:

The grace of Matrimony which a husband and wife receive to love each other and their children unselfishly comes from the Passion of Christ. They receive the grace to make their love a reflection of the love of Christ for his Bride, the Church, personified in Mary. In the flesh Mary was His Mother, but in the spirit, she was His bride.

Children, seeing such love in their parents, can more easily learn what love Christ had for them on the Cross.

Thank you for saving at least one crucifix in one Catholic church. I pray we will all re-learn what Christ the bridegroom really means.

Two really worthwhile books on how our "image" of Jesus has changed are Jaroslav Pelikan's "Jesus Through the Centuries" and Stephen Prothero's "American Jesus: How the Son of God Became a National Icon."

Pelikan looks at the evolution through images of Jesus - paintings, icons, statues - while Prothero's work examines how we have spoken of and appropriated the Son of God in our culture.