THE SECRET LIVES OF CATHOLIC PRIESTS! 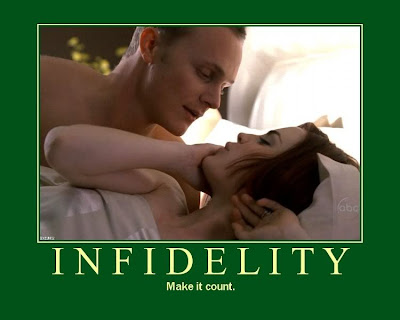 Do people give a "damn" about the secret lives of married clergy in Protestant denominations who cheat on their wives, divorce them, get married to their co-sinner? Voyeurism reigns supreme for those trying to change the discipline of the Catholic Church, but not so much when it comes to those pedestrian Protestant ministers. Who gives a flip?

Let's say that Fr. Cutie featured in the video below, who is now we presume happily married and with child, decides that his attraction to one of his married Episcopalian parishioners is so great that he should celebrate that attraction since sex is a gift from God.

Would he then push the Episcopal Church to change their discipline regarding marriage? Oh, I forgot, they have and no one cares! Never mind!

WATCH THE SECRET LIVES OF PRIESTS HERE!
Posted by Fr. Allan J. McDonald at Saturday, May 14, 2011

What kind of person would I be to let someone screw up like that without telling him? Also, there were two problems. first is that he broke his vow to us, so why would I expect him to keep his vow to the woman? The second issue is more profound than him succumbing to lust. It is that he has laboured excessively to rationalise why everyone but him is wrong. If he wanted to be a man about it he would have prayerfully contemplated if he was dedicated to the priesthood or if he should resign and marry the woman. Instead he wants to keep the position and influence of the priesthood AND get married. So in reality he is in love with himself more than God, the Church, or the woman.

I don't like how he comes out with his opinions after he gets caught. He is so vocal now about this stuff as if he wants to be justified by the public. He should worry about his Justification with God and not the world. What a swindler. He knew what he was get into before took his orders. Then to say the Church was wrong. Does he not take any responsibility at all? Then to run off to the Episcopalians?? Is it that important for him to be a "priest" and wear a collar, that he has to join the one church with the least solid foundation on the subject of marriage! And again to most un-charitably try to smear the Catholic Church, as if the Church did this to him. Not to mention the Episcopalians swift embrace. He is a weak, small, little man. Why doesn't he shut up and go away? He must be getting paid or want back in. The only people listening is the reporters that are trying to stir something up and sell advertisements.

I understand that the promise of celibacy is a discipline of the Church and to break that promise is mortally sinful, but it is no more sinful than any married person committing adultery. And yes, married clergy do that all the time but the press could care less.

How sad for the Church, the priesthood, and catholics. The Cuties have fallen into unholy self fulfillment, and have created a romanticized story of forbidden love, and injustices.

Like any other adulterous relationship, the harm their selfishness creates and causes is far-reaching and they are too immersed in the justification of their sins to see the repercussions.

Excuses are the shields for a sinner to hide behind. He took a vow, and had a long time to contemplate his vocation and the self-sacrifice involved - as their is in any marriage.

Good grief! Pondering how a woman can view a priest in a sexual way ~ It is like an incestuous relationship; and deviant behavior when acted upon.

Perhaps he spent too much time in public out of his collar, and without the visual reminder it didn't register in her mind as illicit.

Sadly, this kind of press probably makes life much harder for some priests.

It is akin to the societal breakdown of the family; with high divorce rates, adultery, the sexualization of children by not filtering what they are exposed to, and the acceptance of premarital sex as normal (and expected) to the point that many people do not see their choices as sinful.

Their attention grabbing in order to create sympathy and acceptance for their personal choices is breaking yet another boundary that should not be acceptable or encouraged.

From those to whom much has been given, more is expected. That being said, sin is sin, Priests are human, and like Father says, a vow is a vow, whether in Orders or in Matrimony.
It occurs to me that if a Priest in the Confessional condones or soft-pedals separation of the unitive and the procreative aspects of Marriage, then sexual acts somehow become neutral not only to the penitents but also to the Confessor, don’t they?
From the point of view of our secular culture and amoral media, public sector teachers get a pass on sexual abuse of young children and homosexual abuse of older children, etc.
The Church and all her members have a special responsibility because of the precious gifts we have received and because of that large target on our backs.

It's very sad to see how fall the average Catholic's regard for the priesthood has fallen in some places. It is especially scary to watch a priest live a double life, only to be enabled by people around him who pretend they don't see it, and hear those same people privately admit, "They're two consenting adults, it's their business."

I agree with you. And that is not only the problem with priests who are enabled by others, but also married couple and parents who enable their children to live together prior to marriage and look the other way or outright condone it. The problem is much bigger than a priestly problem, but the priests are the only ones derided for it. Not that that is bad, we should be shocked and appalled by all forms of sexual infidelity and turn to the Lord in repentance, seeking His mercy and forgiveness and whatever penance is deemed appropriate.

rcg said, " So in reality he is in love with himself more than God, the Church, or the woman."
BINGO! You nailed it!

One day his wife will leave him when she realizes what an egomaniac he really is. (like maria shriver and Arnie).Hopefully she'll also realize what a horrible and selfish thing she did. Hey, if they were 'meant to be together' then she should have made him leave the priesthood the according to the way already prescribed for such situations.

How does that work, exactly? How can he marry a woman when he's already married to the Church? Why is that not illegal? It would be if a man tried to marry two women. I thought the Sacrament of Holy Orders was like the Sacrament of Baptism, you only receive it once. You can't really say, "I know I was baptized but I changed my mind, scratch my name off of your book." Doesn't work that way...

Well, they timed this quite well to coincide with Good Shepherd Sunday (World Day of Prayer for Vocations). Why waste our time on this Father? You would better serve your followers by speaking about vocations - Our Holy Father's has a great message to share on this special day: http://visnews-en.blogspot.com/2011/05/promoting-and-nurturing-vocations-and.html