WOW! READ THIS PILLAR COMMENTARY WITH LINKS TO ARTICLES ON THE GERMAN SYNODAL WAY’S THEOLOGY WHICH IS OF THE NAZI-ERA CHRISTIAN SECT

The ‘Hitler card?’Vatican cardinal and German bishop are clashing after ‘Nazi’ remark; schism making bishop is going to complain to Pope Francis that Cardinal Koch told the truth about the German schismatic synodal way…ouch! 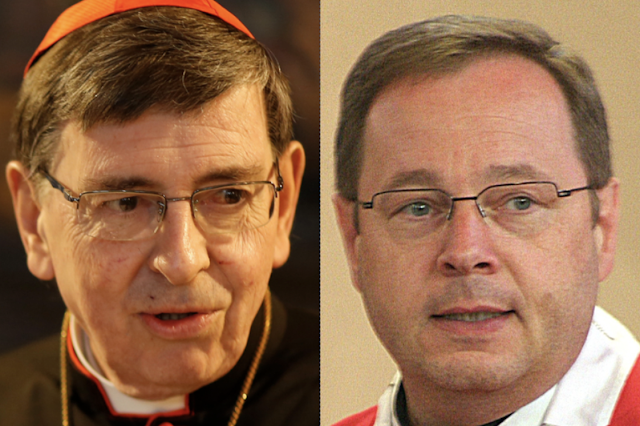 CARDINAL KOCH HAD TO CANCEL A PLANNED PASTORAL VISIT TO GERMANY THIS WEEKEND AFTER RECEIVING THREATS FROM NAZI-ERA TYPE CHRISTIANS WHO ARE UPSET THAT HE SPOKE THE TRUTH ABOUT THEM!!!

The president of the German bishops’ conference has spilled a lot of ink in the past few days, calling repeatedly for an apology, after the Swiss Cardinal Kurt Koch compared theological currents in the German synodal way to the theology of a Nazi-era Christian sect.

What Koch actually said - and how Bishop Georg Bätzing took the remarks - have been widely misreported in the press — especially after Bätzing said that without an apology, he’d file a complaint with the pope.

So on Friday, we put together an explainer on what Cardinal Koch actually said, why Bätzing’s demanding an apology — and why Koch says he’s sticking to his words.

You can read that here.

And you can expect that this situation isn’t going to die down quietly - in fact, as the German bishops prepare to begin their ad limina visit to the Vatican, Cardinal Koch canceled a planned pastoral visit to Germany this weekend — after reportedly receiving threats related to his remarks.

That’s right, the cardinal didn’t go to Germany after “threats of violence against the Schönblick conference center,” where he was scheduled to speak.

If you read The Pillar, you know already that Germany has become ground zero for a lot of controversy in the Church right now — and this situation will likely heighten the growing tensions between the German bishops and some of Europe’s most senior Churchmen.

Where is Bishop Count Galen when you need him? Cardinal Koch is over the target. That’s why the fuss! Remember Hitler was a National Socialist, not a right-winger!

In these days of keyboard warriors "death threats" are a cheap stunt. The Cardinal should not get his panties in a knot over it.

I do not hear any direction to the change being promoted in this video. What if changes advocated in Germany contradict changes hoped for in New York? What if the conclusion is to remain a Tradition and Bible based Church as founded by Jesus, the Apostles and the Fathers?

You know, St Vincent of Learns' definition/idea of the Catholic faith: "Moreover, in the Catholic Church itself, all possible care must be taken, that we hold that faith which has been believed everywhere, always, by all."

Once Tradition and scripture are refashioned, "changed", we no longer have a Christian Church let alone a Catholic one. Int sounds we embrace what the comedian (whose name escapes me just now) called the Church of what's happening now. Personally, I see the entire movement an attempt to accommodate homosexualists and gender dysphoric activist and their fellow travelers.

There is a certain madness going on in the Church and from the very top. I hope more cardinals like Koch and Kasper, aligned more to center left call it out and demand we return to the same approach of Benedict , renewal in continuity with our Catholic Faith.