MORAL RELATIVISM AND THE SYNOD ON THE SYNOD 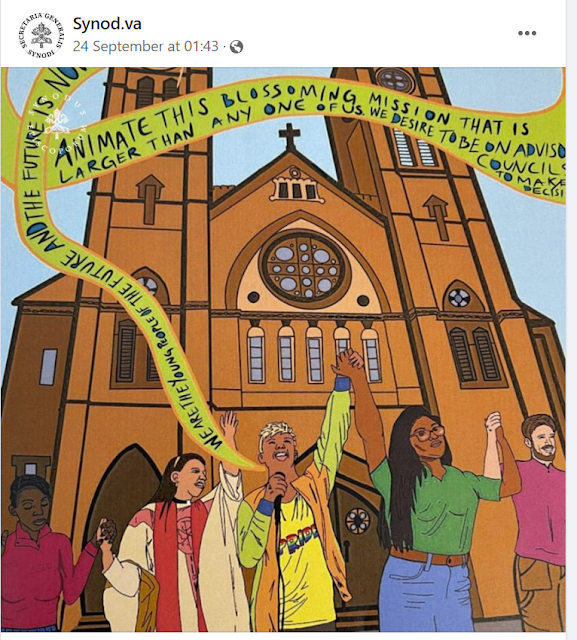 As the German synod spirals the Church there into a schism which many Catholics, no matter where they live, will join, will the Synod on Synods (still can’t wrap my mind around such a silly name) lead to a similar schism everywhere in the Church?

The problem with this schism, is that Pope Francis may support it. Thus, since schism is defined as breaking communion with the Pope as the Supreme Pontiff and Universal Pastor of the Church, those who fight what the Synod on Synod might bring, would be in schism.

For example a committed, practicing and knowledgeable Catholic who in their young 20’s went into a coma in 1962 only to awake in 2022 and completely normal and cognizant as he was in 1962, would find himself in schism with the Pope and the 2022 Church compared to what the Church and the pope were like in 1962.

The most obvious place of this schism for him would be Pope Francis’ desire to once again ban the Traditional Latin Mass as inimical to the Church of the Now. I am sure this coma awakened man would be aghast at what he was experiencing in 2022 especially with what is being said and drawn as art in 2022 to express what a listening Church listens to and approves and that now sociology and psychology are seen as part of a new revelation on parr if not over Scripture, Tradition and the perennial Magisterium of the Church. So too, moral relativism and amorality are a source of wisdom for this new “Listening Church of the Now.”

In other words this recently awaken comatose Catholic would not recognize the Church of the Now as Catholic. The semi-schismatic and schismatic sects of the Church would appear to him to be the true Church as these would be exactly the Church that he knew in 1962.

Thus, perhaps schism should be redefined as separating oneself  not just from the pope, but more importantly from Almighty God, Father, Son and Holy Spirit as it concerns revealed truth contained in Scripture, Tradition and the Deposit of Faith. But keep in mind, the proper interpretation of Vatican II would have to be a part of that Deposit of Faith as Ecumenical Councils always are.

There is an article at CNA talking about Catholic college students who claim this “art” misrepresents their views. Shocker. The higher ups in Rome must be taking classes at CNN or MSNBC, or worse, the New York Times