THE POST VATICAN II ROMAN MISSAL OF 1966: IF ONLY, IF ONLY, IF ONLY, THIS ORDER OF THE MASS HAD BEEN MAINTAINED; WHAT A BETTER AND MORE IN CONTINUITY WITH WHAT THE 1962 ROMAN MISSAL WE WOULD HAVE TODAY AND PERHAPS NOT AS MANY LITURGICAL WARS EITHER ; SOMETIMES WHEN YOU TAKE THE WRONG FORK IN THE ROAD, YOU HAVE TO BACKUP AND GO BACK TO THE FORK AND GO FORWARD ON THE RIGHT FORK!

Please note that this post took a great deal of time for me to take pictures of the Missals I used, to edit those pictures and then input them into my blog and in order to have them in order, I had to input them individually, which took a lot of my precious retirement time to do! And then I added commentary in between the photos, so please read those as you read what the 1966 Missal had!

These are photos from the official 1966 Roman Missal, basically the 1962 Roman Missal, but with a more literal interpretation of Sacrosanctum Concilium meaning a more conservative reform of the 1962 Roman Missal: conservative interpretation of “noble simplicity”; “maintaining Latin and Gregorian Chant but some English, but Roman Canon in Latin, with very conservative revision of rubrics. This Missal is a post-Vatican II Missal and should have remained the Order of Mass even if the Lectionary we currently have was applied to it. But the original Lectionary, at least for Sundays and particular daily feasts could have been maintained as year A with a new B, C, and D. 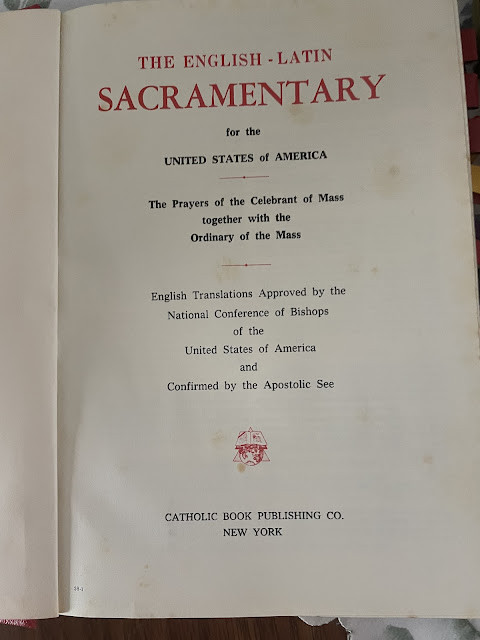 This is quite important! Please note toward the bottom of this page which says this Roman Missal approved by the American bishops and approved by the Vatican’s Consilium (who was charged with revising the Missal) according to Sacrosanctum Concilium, “for the implementation of Vatican II’s “Constitution on the Sacred Liturgy”! We all thought at the time, this was what Vatican II requested and in fact it was approved explicitly saying that!!!!: 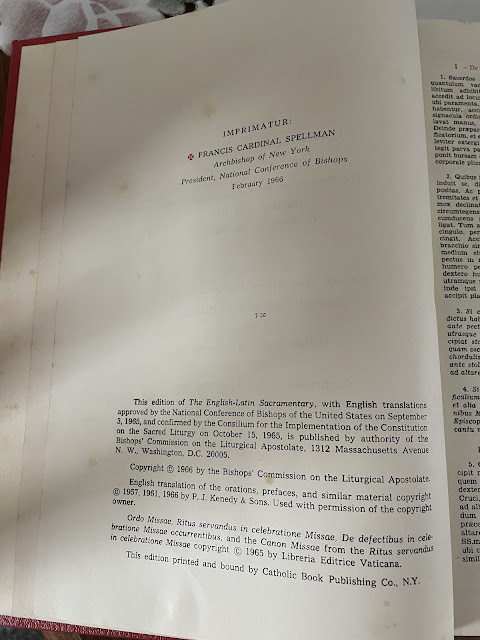 The Maryknoll pew or laity missal used the official translation of the 1965 Roman Missal and provided all that the laity needed for full, conscious, active and actual participation. In this case it is for the 17th Sunday after Pentecost. Please note the propers, even for the offertory, as well as the Liturgy of the Word: 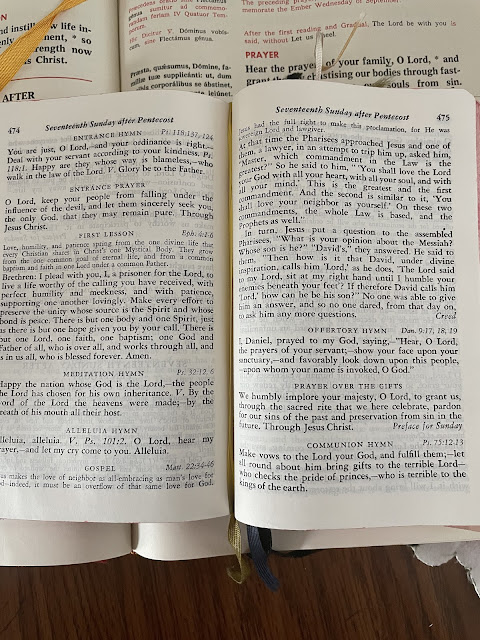 The PATFOTA was simplified, omitting Psalm 42 and the Gloria Patri. In other words, the Requiem PATFOTA became the only version, Requiem or not: 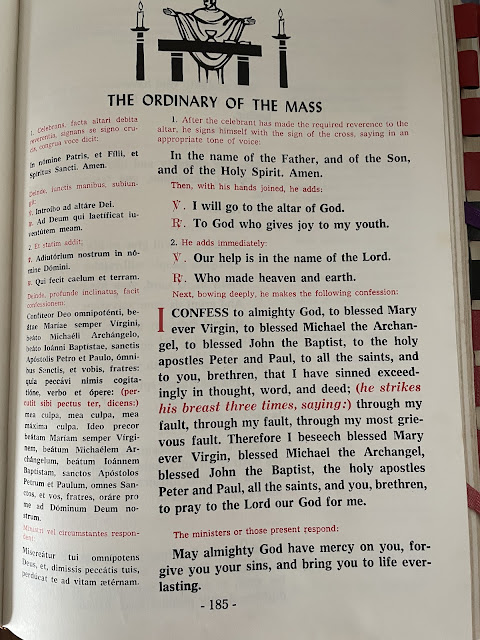 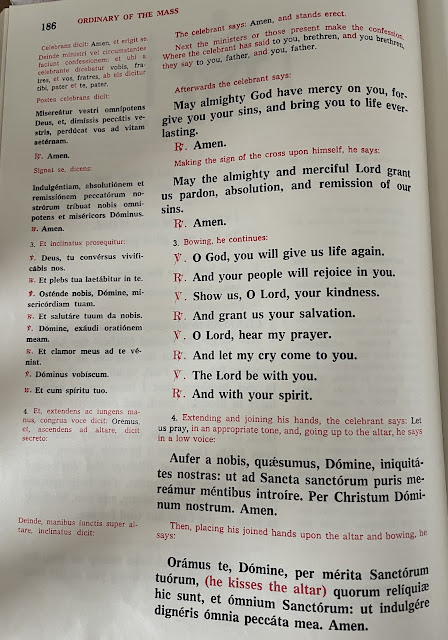 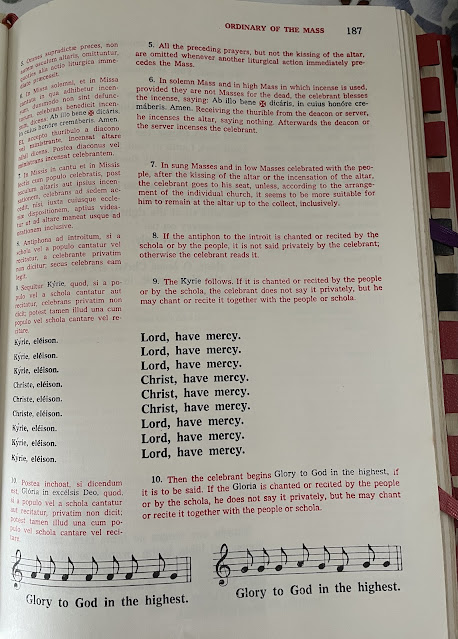 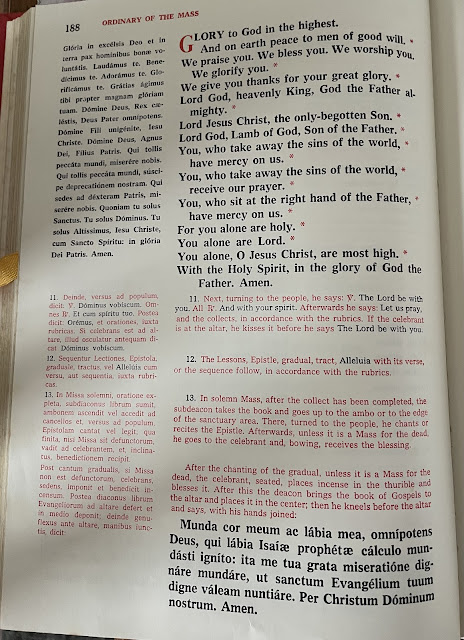 Please note the fuller prayer (as in the 1962 Missal) prior to the Gospel: 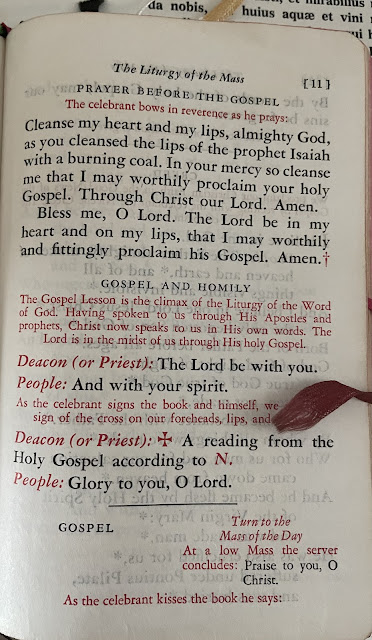 The Offertory was left untouched. The current Missal’s Offertory is a mere shadow of this: 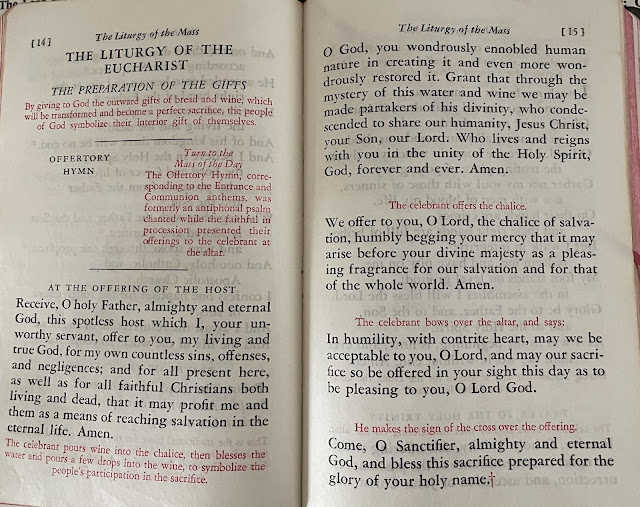 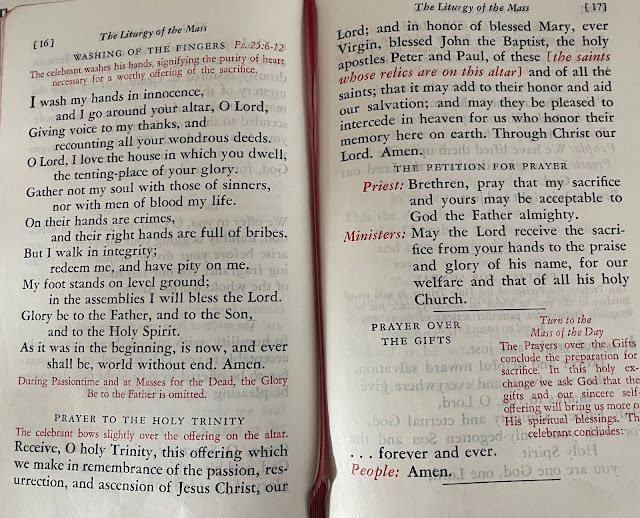 And with your spirit! In a short three years, we went from all Latin, to this translation of English, which was rather good, to the horrible, truncated English translation which last over 30 years! Please note too, that the Sanctus is almost identical with our new and glorious English translation: 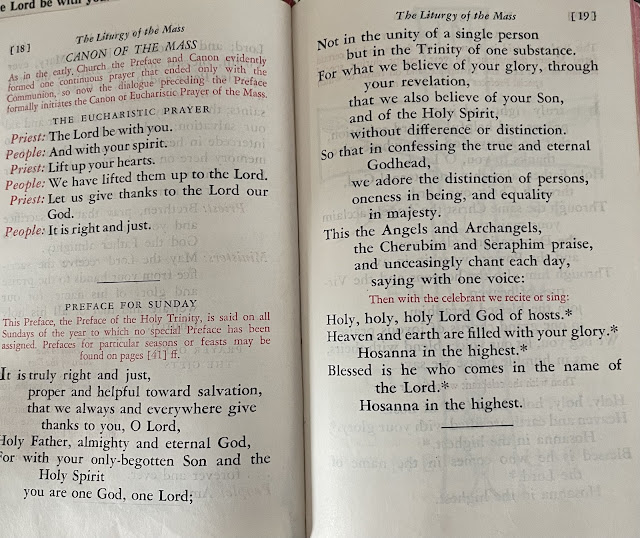 The Roman Canon was required to be prayed in Latin. The rubrics for it had a minor, very minor revision. This is from the Maryknoll hand missal: 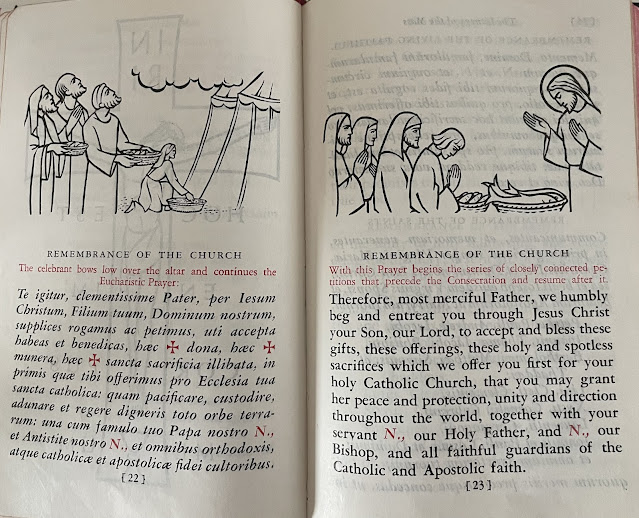 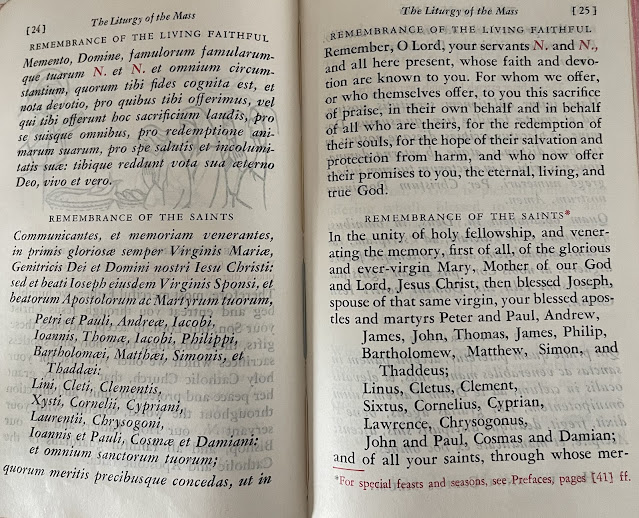 Please note that the words of consecration are left unchanged. The 1970 Latin Roman Missal, changed the formula for the actual consecrations of both the bread and wine: 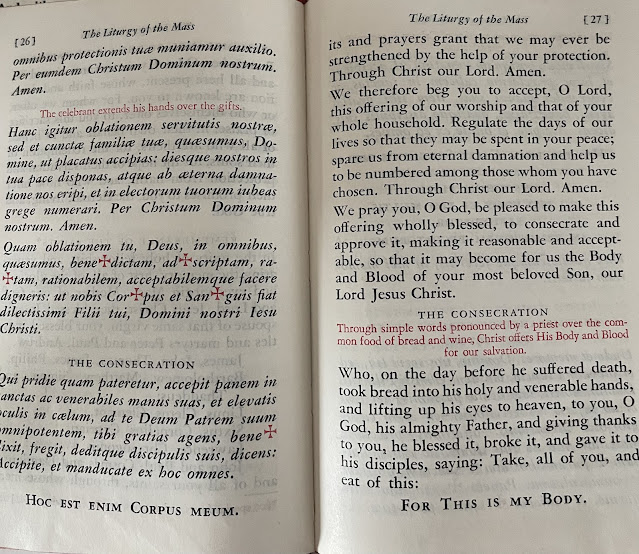 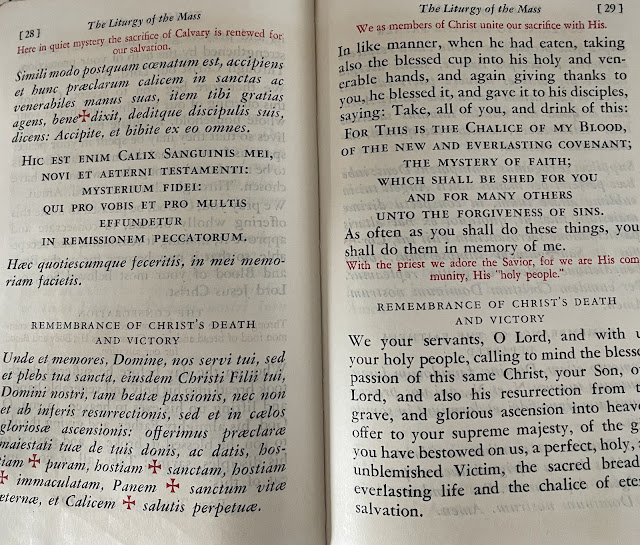 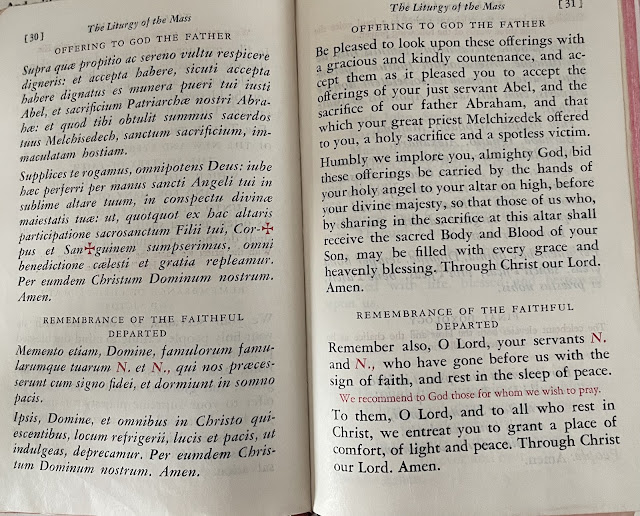 The Per Ipsum did have a minor rubrical change, which is what we have today in the modern Missal: 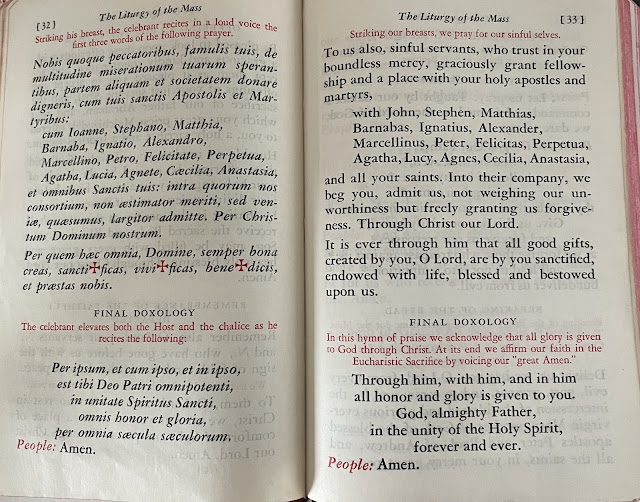 I like the usage of “Eucharistic Banquet” instead of “Rite of Holy Communion”. But no matter the name, it is the same as in the 1962 Roman Missal. Please note the fuller “embolism” after the Pater Noster which includes the intercessions of Mary and some of the saints (the Ordinariate’s Missal maintains this today!): 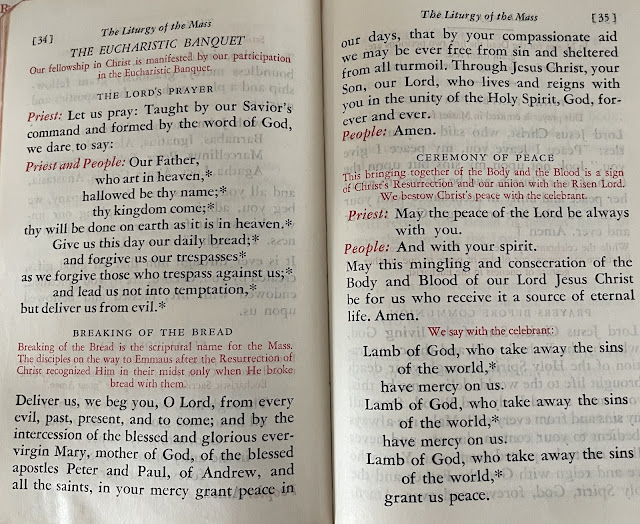 The 1966 Missal maintained the separate sacerdotal Holy Communion with the thrice said “Lord, I am not worth…” It also maintains the prayer prior to consuming the Precious Blood, completely expunged in the modern Missal! Please note too, the prayer “I will receive the Bread of heaven…” prior to the “Lord I am not worthy…” now omitted in the Modern Roman Missal: 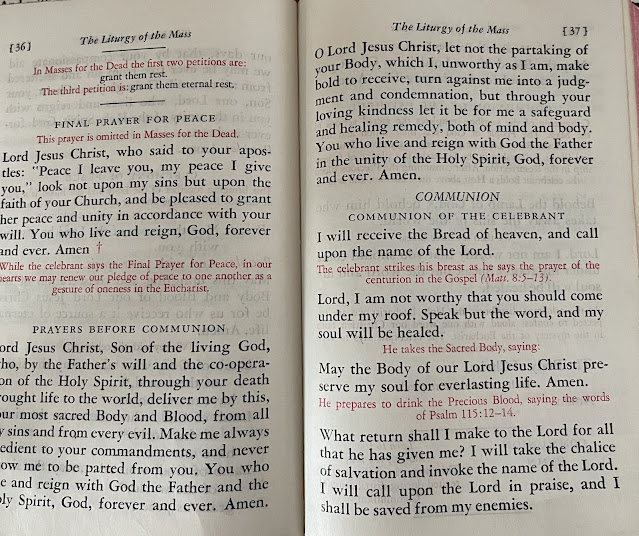 Please note that the Rite of Holy Communion for the laity is included in this 1966 Roman Missal. This is new and never was in any preceding Roman Missal! This was a wonderful addition. What we do with the 1962 Roman Missal is custom but not written in the Missal as it is in this one. Please note too, the purification of the chalice has the fuller prayer and the use of wine first, then wine and water. Today we only use water in the modern Roman Missal and the second prayer is omitted altogether. Such an impoverishment!: 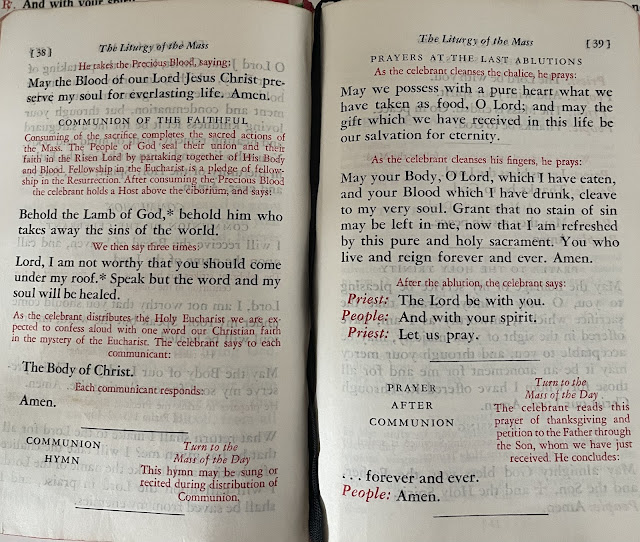 The traditional order for the Dismissal is maintained although the “Last Gospel” has been eliminated. The Placeat is maintained too: 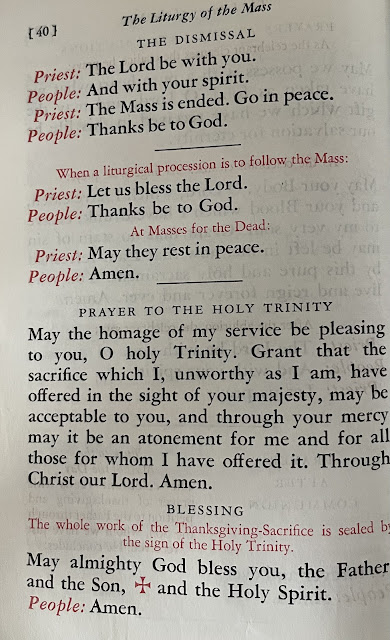 The Suscipiat and Placeat, I am sure, are organic developments to assist with added actions on the part of the laity. The Suscipiat, the last prayer before the priest turns to the laity to say “Pray Brethern” gives the altar servers time to return to their place after the Lavabo and incensation of the congregation so they are in place for the “Pray Brethren”!
The same with the Placeat at the dismissal; after the priest says “go in peace” he turns to the altar and prays the prayer to the Holy Trinity, allowing enough time for the congregation to kneel for the final Blessing said after the Placeat!
Posted by Fr. Allan J. McDonald at Monday, October 03, 2022

but where do the skate boards and clowns fit in. What about liturgical dancers. Oh the humanity, such suffering

to quote from the comments on another blog
"I’ve often thought the hatred for the Old Mass springs from the opening words of the prayers at the foot of the altar: Judica me Deus – Judge me, O God. The priests don’t want to be judged, and don’t want their parishioners, whom they have misled for years, to be judged"

for once and for all, the trouble with VII is not so much VII its that over the top asinine "SPIRIT of VII. It meant whatever the bag of hot air bloviating about it wanted it to mean. More destruction was done in it's "spirit"

The Novus Ordo is a hydra headed creature that promotes “disunity.” In stark contrast the TLM is simplicity personified and promotes unity. Yet most of our hierarchy is too dense and/or biased to see this

I have a 62 missel,but i would love to follow along with the 65 missile as mine has no latin. wonderfull work father. I belive this is what the council had in mind for the liturgy. Thank you, Thank you for your work. Your bringing a lot more light to what the council expected from the laity and the liturgy.Do you mnd if i follow you blog.