A SERIOUS QUESTION FOR CANON LAWYERS 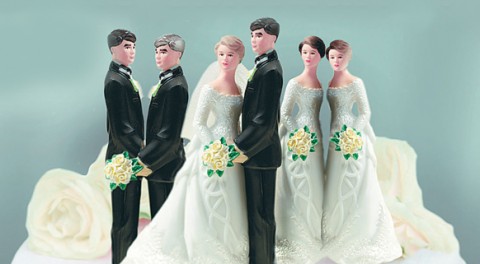 When a Catholic wants to marry in the Church, we ask both parties if they have had any previous marriages.

If the Catholic had an illicit marriage outside the Church they must fill out a “lack of form” case that requires two witnesses.

Let’s say that either the female or the male contracted a “same sex civil marriage” but decided that they were actually heterosexual and divorced.

Now they present themselves for a Catholic marriage. Does the Catholic party have to fill out the “lack of form” paperwork to clear up any questionable and/or invalid marriage?

Probably, as all marriages are considered valid until shown to be otherwise.

I'm not a canon lawyer, but want to put my two cents in. I would think not. A same-sex "marriage" is not recognized by the Church under any circumstances as being valid so being "illicit" or not is irrelevant. It would be like a Baptist minister celebrating Mass. Since he's not validly ordained, there is no Mass. So, being considered illicit or not would also be irrelevant.

No, since same-sex 'marriages' are not marriages at all, so cannot be considered valid.

Not a canon lawyer, but my first-pass answer is no.

Here's why a same-sex marriage is different.

In the case of a Catholic who married outside the Church, while it is usually a simple matter establishing that the marriage was invalid (because of the failure to observe the Catholic form of marriage), there is just that possibility that the seemingly illicit marriage might be found, actually, to be valid! Howso?

- The Catholic party who was bound to the Catholic form of marriage might, it turns out, not be Catholic.

- There might have been a dispensation from the Catholic form of marriage. The Catholic party might have forgotten about it, or might be concealing it. Why conceal it? Because he knows that if such a dispensation had been granted, he'd have a more arduous time proving his marriage was invalid; whereas without the dispensation, the marriage is invalid on its face.

There are probably other circumstances I am not thinking of, but I'll let someone else itemize them.

On the other hand:

There are no circumstances -- none whatsoever -- in which an attempted marriage between two people of the same sex could ever be valid. Absolutely NONE.

So my answer would be that there is no need for the "lack of form" process to be pursued. On the other hand, surely other questions need to be answered, such as: are you sure you're clear about your sexual identity? After all, if in years to come, this Catholic marriage falls apart, the fact of one spouse having been so certain of his or her attraction to the same sex would surely invalidate a marriage, n'est pas?

A same-sex marriage is not so much a lack of canonical form as it is a lack of canonical matter! Thus I cannot even be presumed valid until proven invalid under the provision of canon 1060. There would be no need of certifying the invalidity unless it was very public and would otherwise cause scandal. In that event, an affidavit describing the circumstances would be prudent.

Heterosexual civil marriages between baptized Christians are considered valid because individual Christian communions are empowered to define their own canonical form for marriage, and most recognize civil marriages as sacramentally valid.

The problem, though, and even for the Catholic Church, is that the homosexual union is considered lawful in the USA. At the least, we would need to require a copy of their marriage license and civil divorce because the Catholic Church demands that there should be a legal recognition of our marriages. Thus if I married a couple or both of whom had previous homosexual civil marriages and they did not obtain a civil divorce, the Catholic marriage while presumably sacramental would have no legal recognition.

Priests in the USA are not allowed to perform weddings of those who are not civilly qualified.

From the website of the Archdiocese of Atlanta under "Ground of Marriage Nullity:"


Incapacity to Assume the Essential Obligations of Marriage (Canon 1095 3º)

To enter a valid marriage, a person must have the psychological ability to take on and to live out the lifetime obligations of marriage. A person cannot consent to something that is beyond their psychological capacity to fulfill. Even if the condition became known or diagnosed only after marriage, if a person was afflicted at the time of marriage with a serious psychological or psychiatric condition that prevented him or her from assuming the obligations of marriage, the marriage was invalid. Proof of the condition must be provided, however, and often the Tribunal will require a current evaluation by a mental health professional. Because the ground requires incapacity and not merely diminished capacity, it may be difficult to prove.

Gay marriage is civilly legal. A civil marriage, gay or straight, MUST, I would say, be civilly dissolved before a marriage in the church can take place.

Documentation to that effect would have to be included in the prenuptial file for the couple preparing for marriage in the Church.

Civil law doesn't concern itself with what the Catholic Church considers to be valid, either in form or matter.

Does Canon Law need to concern itself with a diabolical union?

As Fr. McDonald mentioned above, "Priests in the USA are not allowed to perform weddings of those who are not civilly qualified."

If a person is civilly married - gay or straight - that disqualifies a person from entering into another civilly recognized union - gay or straight. (Bigamy is the condition of having two wives or two husbands at the same time. A person who knowingly commits bigamy is guilty of a crime.)

If the Catholic had an illicit marriage outside the Church they must fill out a “lack of form” case that requires two witnesses. Isn't a same sex civil union,or as the LBGTQ community prefers and the government legally defines,a marriage; illicit to the Church and legally binding outside the Church? What makes it an illicit marriage is the use of that word marriage in a same sex contractual union. To me its obvious they must fill out the form. To you it probably is obvious I am not a lawyer, cannon or civil.

Bigamy is the condition of having two wives or two husbands at the same time. A person who knowingly commits bigamy is guilty of a crime.)

boy is that one loaded, gay couple, then straight Catholic marriage,civilly ,is the man guilty of having two wives or a husband and a wife???? Lesbians???

lighten up, it's Sunday

Canon law has a flaw if it requires a Catholic to spend money to get a civil divorce from a gay “marriage” which is void ab initio in the eyes of the Lord and His Church. It may give Anonymous K his jollies to bow to the State but such a requirement is ludicrous

You persuade me that there must be a civil divorce.

Canon Law doesn't concern itself with any Tammi, Jacqueline, or Margaret's consideration of how it may be "flawed."

Again, as Fr. McDonald has pointed out, "Priests in the USA are not allowed to perform weddings of those who are not civilly qualified."

Fr. McDonald, not Anonymous, made the statement. Is he guilty of getting his "jollies" by bowing to the state?

Requiring the civil divorce is in no way "ludicrous" since it is purely a civil action impacting a civil marriage.

Of course a cleric supported by his parishioners can be quite cavalier about other peoples money. You have heard the phrase the law is an ass? It applies in spades here. If this truly is required by canon law,, then canon law needs to be changed. I don’t care if it gives gay clergy the vapors or causes them to clutch their pearls. I would also point out that when these canons were written, no sane person would have contemplated the diabolical development of gay “marriage.” I wonder if that point was considered by Father McDonald?

If a cleric must hire an attorney, guess who pays the attorney fees. The cleric. Not, the parish, not the diocese, the cleric. So your comment is based on ignorance.

LOL. Where did the money come from that the priest has? The parish. You can't handle the truth.

TJ - You're no Jack Nicholson. And you will recall that his character, Col. Nathan Jessup, was tossed into the hoosegow for his violations of the law after lying about it with a number of co-conspirators.

Not the most exemplary character there...