OH WAIT! I THINK I KNOW WHAT THE CAUSE OF THE ON-GOING MELTDOWN IN THE CHURCH IS: LOSS OF CATHOLIC IDENTITY TOUCHING ALL MEMBERS OF THE CHURCH, LAITY, CLERGY AND RELIGIOUS TO INCLUDE THE MAGISTERIUM 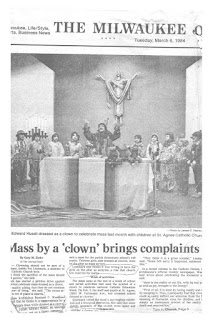 Below this post I quote Benedictine Sister Joan Chitister of Erie, PA. She is a dinosaur, still living though, of the 1960's revolution that abandoned the Catholicism of the pre-Vatican II Church for the mushy version they desired.

This led to the loss of Catholic identity of Bishops, priests and men and women religious all of whom were formed in the stricter version and strongly Catholic Church prior to Vatican II.

Once former constraints on individualism and doing your own thing were removed, they lived their lost Catholic identity with reckless abandon. Just a few years after the Council, many clergy and religious left their promises and/or vows of celibate chastity for the married life. Homosexuals who did not have the option of civil marriages or laicization that could lead to a Church marriage stayed but lived life with reckless abandon now that Vatican II spirit removed the shackles of constraint on their disordered affections.

All you have to do is to read the so-called moral theologians of the 1970's, like Fr. Charles Curran and others to know that they were enablers helping those who had disordered affections to get around traditional, manualist moral theology.

The loss of Catholic identity was shoved down the throats of unsuspecting laity by these revolutionaries and their libertine notion of Catholicism in the post-Vatican II era, a new Church in complete rupture with the past.

Some laity loved the new direction of liberalism and individualism and soon did their own thing which led many of them away from even the liberal expressions of Catholicism.

Thus we have a smaller, less faithful Church today and we are reaping the fruits of immature clergy and religious who abused their vows and promises not only with consenting adults, but with vulnerable adults, teenagers and in extreme cases pedophilia with small children.

So much of this loss of identity was explicitly symbolized in the various abuses of the new order of the Mass, such as the photo of the priest dressed as a clown with children around him in 1984!  The complete abuse of the Vatican II liturgy coupled with the abuse of minors and vulnerable adults can certainly be linked one to the other in terms of the narcissistic personality of priests and religious.

Thus infidelity and loss of Catholic identity promoted as what Vatican II taught is the height of clericalism and the lies that have led us to where we are today!
Posted by Fr. Allan J. McDonald at Friday, September 21, 2018

Having lived through all this in the 1960s as a young adult convert highly engaged in my parish, I know that--so far as the laity are concerned--the abuses and changes in the Mass not only symbolized but largely caused the loss of faith and Catholic identity.

Everyone I knew felt that if the previously immutable Mass could be changed, then everything about Catholic faith and practice was up for grabs. Changes in the liturgy came first; only then did beliefs and devotions begin to fall away.

"The complete abuse of the Vatican II liturgy coupled with the abuse of minors and vulnerable adults can certainly be linked one to the other in terms of the narcissistic personality of priests and religious."

Oh, how so? Please don't tell us "It's obvious" or "It is as plain as the nose of your face" or any other such self-serving justification.

Is there are real connection shown anywhere?

Bean, is that you Kavanaugh?

That, and what I’ve lately come to think of as “corporate” Narcissistic Personality Disorder probably always existing under-the-surface, but then unleashed somewhere around 1968 post-Vatican II. I was 21 at the time, and sometimes couldn’t believe my own eyes and ears! The chaos of change/revolt in that era produced social upheaval that was palpable and present in nearly every aspect of life.

Into this perfect storm stepped Vatican II; a touchstone for the American Church when theologians peremptorily put their own spin on what the Council Fathers had produced. Everywhere one looked, the baby was tossed with the bath water (except in traditional Catholic homes!). Then, slowly but surely, society began to influence and form Church, rather than Church being the model for society. Even traditional Catholic homes began to morph and produce children who questioned everything including the stability their homes had once provided.

Don’t get me wrong here. Change is necessary when wrong is ignored spawning evil patterns: overarching racial segregation, the on-going wars that weren’t even declared war, the blinding materialism that engulfed us to name a few of many. But our responses to evil no longer were influenced by reason and faith, but rather by effusive emotion (on both sides of an issue).
And so it began and so it continues..

The Sacred Scriptures were written in the language of the literature of the societies in which they were created, Hebrew and Greek.

The Civil Rights movement in the USA impacted the thinking of American prelates. They were wise enough to begin desegregation of our schools earlier than many other denominations.

Fagiolo, often engineers of social change are focused on shifting the focus away from their own issues and toward broader concerns. So yes, the bishops after Vatican II tackled racism, the economy, war and peace, nuclear disarmament and the like and they basked in the glory of what they called “the Catholic Moment!” Today Pope Francis focuses on global warming, the environment and appeasing secularism by dumbing down Catholic Moral teaching on the broad spectrum of sexual issues of concern to secularists.

All the while the hierarchy ignores their own complicity in the rape of teenage boys, many girls and some small children by their priests and shuffling them about to continue the exploitation. And Pope Francis won’t say a word about his corruption, the corruption in the Vatican and poorly chosen bishops and cardinals!

Shall I say more?

Toward the recovery of Catholic identity, perhaps I may be permitted to reference this photo-essay in the Adoremus Bulletin about the new Knoxville cathedral. Apart from the cathedral itself, it seems to me to be a veritable tour de force about how a cathedral ought to express Catholic identity.

"In sum, the patrons, architects and artists of the new Cathedral of the Most Sacred Heart of Jesus have done something not seen for more than half a century: they commissioned an affordable building which nonetheless uses an erudite and recognizable classical mode, fine materials, local customs, time-honored Roman motifs, and a theologically-informed iconographic program. To a faithful Catholic, it might sound obvious to do these things. But recent years have seen many new churches where the client meant well, but lacked the architectural sophistication to hire a classical specialist or the liturgical understanding to see an iconographic program as more than a collection of devotional images. In Knoxville, the cathedral shows a wholistic approach to sacramentalizing a new world on the interior, a place where space and time suddenly change from the limitations of the fallen world to the expansiveness of the restored cosmos."

"The cathedral does indeed represent a great local achievement, and congratulations are in order to all involved. But it is also more. With a humble budget in a diocese of a mere 70,000 Catholics, this cathedral has set the high point to date for architectural and theological richness in the postconciliar United States."

Thank you FRAJM for this apparently necessary response to a blind and deaf “Bean”.
Emotion over reason always seems to rule the day with this sort, God bless em! I could go on with examples of Church destruction by culture war, but I long ago gave up trying to reason with entrenched liberals. One can change a bondage to liberal agendas (I did many years ago only after I matured raising my own family), but it is rare indeed. A lifetime of narcissistic bombastic bullying begets lifelong blindness. I try not to go there.

"All the while the hierarchy ignores their own complicity in the rape of teenage boys, many girls and some small children by their priests and shuffling them about to continue the exploitation."

This is a completely unfair and untrue statement - and you know it.

First, lumping "the hierarchy" into one guilty mass of people is unfair - and you know it. Yes, there have been some bishops who acted in ways that are reprehensible. But - and you know it - there are many, many more who have not. You JUMP to make this point when priests are lumped together, but you seem to have little or no respect for 1) the Office of Bishop or 2) the men who serve honorably in that office today.

Second, there is not a single American bishop alive today who is "ignoring" any of this - and you know it. Yet you keep beating this drum of "They're Doing Nothing!", "They're Ignoring The Problem!" while you simultaneously copy and paste reports of what IS being done on this very blog.

Beans Kavanaugh, LOL. What was language was the Church supposed to use, Sanscrit? Fortunately those were benign matters and did not negatively impact the Faith, unlike today, where the Church, instead of fighting back, is caving in to divorce and fudgepackerism!

fyi,
The Catholic Church was way ahead of the American Civil Rights movement, so perhaps, the Civil Rights Movement was following the Church.

From 1435 to 1890, there were numerous bulls and encyclicals from several popes written to many bishops and the whole Christian faithful condemning both slavery and the slave trade. In contrast, the Democratic Party didn't hang up slavery until Republican Abraham Lincoln crushed them

How much is George Soros paying you to post here?

"Fudgepackerism"? Is that some high falutin' legal term you learned in your 40 years of legal experience?

Based on what we are reading today about McCarrick and some of you other "heros" I am sure you get the drift.

Hey, fake catholics! This ruling exposes how evil and how tyrannical the modern Dem Party has become:

The Democratic Party is what it is: a secular conglomerate of liberal direction & solutions to a myriad of liberal agendas.
What I’m personally and really worried about is our Catholic Church! What is HER direction and what are HER agendas. At least in secular politics we get to vote on the leadership and thus the direction/agendas. Our Church, on the other hand...

It does seem that our beloved Church via her leadership is intent on self-destruction...