WHY HAS THE POST-VATICAN II CHURCH IN THE USA TRIVILIALIZED DEATH AND DENIED GRIEF FOR A FAKE RELIGIOUS TRANQUILIZER AT THE TIME OF DEATH? 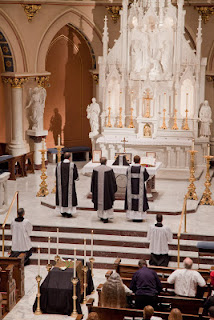 Most of Catholic Europe uses violet, not white for Requiem Masses. 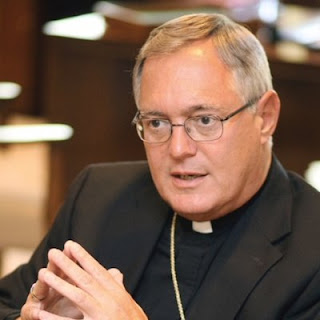 It struck me during a Funeral Mass today - most of the mourners, family and friends, were wearing black. The priests were all wearing white. Question: Why do we have that disconnect with the instincts of the faithful?

And this was on my search engine, Yahoo:

First ladies Melania Trump, Michelle Obama, and Hillary Clinton sat together to mourn the death of Barbara Bush and wore black to show in a symbolic way the finality of death in this life.
Posted by Fr. Allan J. McDonald at Sunday, April 22, 2018

Further to Father’s thoughts, here is a link to the story of the Requiem Mass in Rome for Brother Anthony Freeman, LC, who had been the crucifer for the Pope’s Easter Sunday Mass and then died in his sleep that same night. Note that all the Legionary priests are wearing purple. http://legionariesofchrist.org/mass-eternal-repose-brother-anthony-freeman-l-c/

In my present parish, I wear black vestments at all funerals, except in Easter season, when I use purple. There have been no problems.

Occasionally I talk to someone, or hear about someone, who will say something like, "when I was a kid [i.e., before the reform of the liturgy] the priest always wore black at the weekday Mass, it was terrible and I can't handle it." I have had similar comments made about use of Latin, incense, chant, ad orientem, and cassocks. Some of those making this sort of comment have been priests.

So this explains a lot, especially for those like me who were born in the 60s, and have little -- or, in my case, no -- memory of anything prior to the 1970 Mass. Even when I was four or five, the Mass I would have been taken to would have been one of the transitional forms. So when Catholics of my age, and younger, show interest in all these things that were verboten for awhile, it isn't nostalgia; we are meeting these things fresh.

This also explains why, when we introduce these things, or pull things like chalice veils and patens down from the shelf and use them again, some of the reactions are so over the top.

One of the things I hope I am doing better is explaining, to those who are in that stage of remembering the old days very unhappily, that when I do these things that seem so incomprehensible to them, I am doing them for a younger generation that, like it or not, responds favorably.

"Why do we have that disconnect with the instincts of the faithful?"
Because the Novus Ordo fabricators were the extreme of elitism, very detached from the laity, telling them what and how to pray, without ever asking them if that is what they wanted or if it were in their best interest for salvation.

White vestments in this context are spiritual "pablum" I prefer Black vestments but I could see if you wanted to emphasize both sorrow and joy at the Funeral Mass, the priest could begin the Liturgy wearing Black and then maybe after the homily don White vestments. A little theatrical perhaps, but certainly better than the status quo.

Fr. Fox: "Occasionally I talk to someone, or hear about someone, who will say something like, "when I was a kid [i.e., before the reform of the liturgy] the priest always wore black at the weekday Mass, it was terrible and I can't handle it.""

I attended daily Mass in the late 1950's and never heard anyone say anything like this then. So when I hear someone say it now, I wonder whether it's a valid memory, or repetition of some sort of myth.

It's true that people took prayer so seriously in those days that many or most class 4 (ferial) days saw requested requiem Masses for departed loved ones. But surely no more than one or two in a typical week, since class 1/2/3 days would have taken precedence.

The use of black or purple for funerals is not "instinctual." It is, rather, a cultural construct.

The use of black or purple for funerals is in no way related, even remotely, to the "best interest for salvation." It is a cultural construct.

Black, as with clergy attire, indicates simplicity. Black (or dark) cloth was inexpensive and thought not to be "showy" or "ostentatious" as these would be inappropriate for a person in mourning.

Dancing, unless one is Scarlet O'Hara attempting to woo Rhett Butler, was also disapproved for those in the throes of grief.

In China, white has been the traditional mourning color. Is it not an "extreme of elitism" to impose black or purple on the mourning practice of the Chinese?

In the Philippines, white OR black is worn for mourning. Historically, anyone in mourning who wore the color red within 9-40 days after the death of a loved one would, him/herself, die or suffer serious illness.

White at Catholic funerals expresses belief in the Resurrection of Jesus and the hope that the deceased will share in that resurrection to new life.

Kavanaugh. Blah, blah, blah. You should ask your Queen Hillary why she wore black instead of white because she knows better than you

One time I asked an Orthodox priest why the music and homily was so sombre at the funeral I attended. His answer was that the Church mourns with the bereaved.

Only a Novus Ordo Church could be so detached and insensitive from the bereaved so as to make some disgusting claim that everything is all right, that one should rejoice, that the deceased is now in heaven. If it is a hope, then it should be green. But I have a feeling purgatory and hell are quite well populated. In the West, black is the traditional symbol of death and mourning, and that is what we are talking about.

Celebrating the hope of the resurrection is not, by any stretch of the imagination, a claim that everything is all right.

The Church is prophetic. We speak for God who promises resurrection to the faithful. To proclaim this hope in the midst of grief is entirely appropriate.

THAT is what we are talking about.

Anonymous @8:45.
The Protestants use that word "prophetic" a lot, and in many different ways. You need to explain the use of that word in the Catholic context.

It is Jesus through His Catholic Church that gives hope. He promised resurrection to those who died in the state of grace. At funeral Masses, it is not a matter of just proclaiming hope, we do that at every Mass, but specifically praying for the soul of the deceased which may be in great agony in purgatory. This holier than thou attitude of using the joyful white when everybody is grieving is really offensive, something a detached Ivory Tower inhabitant would dream up.

One time I asked an Orthodox priest why the music and homily was so sombre at the funeral I attended. His answer was that the Church mourns with the bereaved.

YES! In the Byzantine Church, the tone itself would be somber as well for it fits the occasion. A few years back, I watched on the news a funeral for a police officer killed in the line of duty. The celebrant and concelebrants were all vested in white. I looked at that and wondered, what is there to be joyful about? An innocent man's life was taken, his family shattered and those who surrounded him devastated. People should be allowed to mourn and not have pseudo joy introduced to masses for the dead that is clearly not a joyful occasion.

Prophetic is the adjectival form of prophet.

Prophet is from the Greek "prophetes" meaning spokesperson or one who speaks for another.

The Church speaks for God who promises resurrection to the faithful.

Agony in Purgatory? I suspect the souls in Purgatory are among the most joyful of those outside of heaven since they have absolute certainty of being welcomed to the eternal banquet feast in heaven.