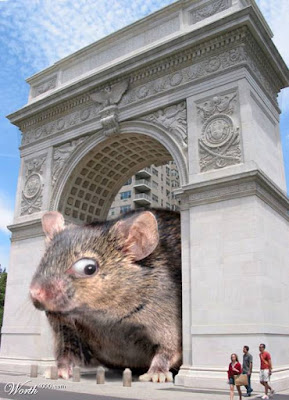 I lived in Augusta with its nuclear bomb plant built in the 1950's and at the peak of the Cold War employed more than 30,000 people.

We always wondered when we would glow in the dark.

The plant is in cleanup phase for eternity.

This appeared in the Augusta Chronicle this morning:

By Tom Corwin Staff Writer
A watchdog group is asking for further investigation after a highly contaminated mouse was found in a radioactive waste storage tank area at Savannah River Site.

According to a 2013 report from the U.S. Department of Energy, the H-Area Tank Farm at Savannah River Site holds 29 tanks to store liquid waste, much of it from reprocessing of nuclear materials at the site. According to that report, each tank has a capacity ranging from 750,000 gallons to 1.3 million gallons.
The mouse was found on Feb. 24 in a building that is a Radiological Control Office inside the H-Area Tank Farm that stores radioactive waste at SRS. The mouse was killed and subsequent testing revealed it had 160,000 disintegrations per minute of beta-gamma radiation, although no other contamination was found in the building. That is more than 10 times the level of surface contamination level of 5,000 disintegrations per minute for that type of radiation and it triggered a report to the U.S. Department of Energy.The report filed April 5 does not say where or how the mouse became contaminated and that is what troubles Tom Clements, director of Savannah River Site Watch.

“That’s what is probably the highest concern for me is how could a mouse wandering around on the surface pick up contamination,” he said. “And the report really does fail to explain that and what the remediation is going to be for this situation.”

A U.S. Department of Energy spokeswoman said Wednesday she couldn’t provide an answer until today .
While noting it was a “positive thing” that there was no further contamination, “it does leave the question unanswered as to of where the contamination came from,” Clements said. “I think this merits further study and investigation because of that very point.”

Another concern is there are “a ton of animals” out at the site, such as possums and coyotes, and if a mouse could find its way into a contaminated area perhaps other animals could as well, he said. While Clements said he was not going to file a formal complaint about the incident, he does plan to bring it up at the next full SRS Citizens Advisory Board meeting in May.

In March, the Department of Energy extended a contract with Savannah River Remediation to continue liquid waste disposal at SRS.
Posted by Fr. Allan J. McDonald at Thursday, April 12, 2018

Mice in the wild are both herbivores and omnivores. If they eat contaminated seeds, grains, and/or fruits, some of the radioactive contamination will remain in their bodies and will build up over time.

Mercury (methylmercury), which got into the food chain largely from coal fired power plants, built up in tuna over the years. (Bluefin can live up to 40 years).

We've gotten better at 1) not using so much coal and 2) cleaning up the by-products of burning coal before releasing it into the atmosphere in this country. Unfortunately, other countries are releasing more and more.

Unless, of course, you think radioactive mice are part of a Masonic plot to destroy the liturgy.

Mice can go where other animals can’t. Also need to find out what element is making mouse hot. That should narrow the search. In any case, they need to do thorough check.

Yes there was a radioactive mouse in the Vatican named Bugnini who did a great job in destroying the Liturgy.

"Yes there was a radioactive mouse in the Vatican named Bugnini who did a great job in destroying the Liturgy."

In 1955, C Reactor went critical. The first plutonium shipment left the site. H Canyon, a chemical separation facility, began radioactive operations. Permanent tritium facilities became operational and the first shipment of tritium to the Atomic Energy Commission (AEC) was made. In 1956, construction of the basic plant was complete." - Wiki

Yes he became a giant liturgist!

Anonymous Kavanaugh at 2:41, you are a hoot. I know you admire this destroyer of the Liturgy

In Savannah, you can now read in the dark with a catfish...