As US mourns history's 2nd First Lady/First Mother, lest anyone forgot, the builder of the massive “New Church" at Barbara Bush’s Episcopal parish – where her Funeral will be held – is now Msgr Larry Gipson, a “Roman Catholic" priest of the Anglican Ordinariate: (link: https://wapo.st/2qHktOb) wapo.st/2qHktOb 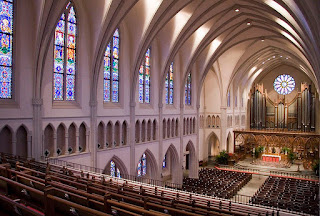 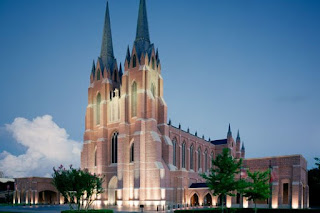 Forgive me, Father, but when I saw that church, my first thought was, "that's big enough for every Episcopalian in the country to sit in the pews!"

St. Martin's reportedly is the largest Episcopal parish in the country---9,000 or so members---in addition to the Bushes, it has been the home base of former Secretary of State Jim Baker. Despite the church's looks, it is not particularly a High-Church parish (the Houston-based Diocese of Texas traditionally being "low church" in its worship)---while they have Communion every Sunday, it is not served at every service---their mid morning service rotates between Morning Prayer and Holy Eucharist. They do have women clergy too. But their rector (pastor), Dr. Levenson, is a firm believer in traditional marriage (man and a woman)...an issue doubtless to be fought over at the national church's general convention in Austin in July....

Interesting how many protestant churches continue to retain many of the traditionally Catholic elements that our own people tossed aside. I believe Fr. AJM highlighted this in a post several months back. Even the newer "traditional" Roman churches have oddities with respect to the relationship between the tabernacle and the altar (why do we still torture ourselves over this??), side shrines etc. that, to me, results in a neocon presentation: the look of tradition without the function. The Roman Church is so irritatingly inhibited by the "Spirit Of".

To the priest who swam the Tiber, welcome home.

normally, I don't like the organ or choir in the front, but how this is designed is very splendid and with the choir behind the rood screen is very appealing. I love the altar, and please note how high it is from the nave and that it has the three traditional steps toward it. And the altar railing is excellent and fits very well in this design.

Sad that an Episcopal Church has what we once had in liturgical design and often mandated by liturgical law.

The church's design was based on a 13th century church, St. Elizabeth's, in Marsburg, Germany.

I think the Bushes were more of the "Low Church" wing of the Episcopal Church, and between that and security concerns, I would be surprised if her service this Saturday includes communion. More likely, it will be a service of hymns, prayers, scripture readings and homilies/eulogies.

Msgr Gipson is a great priest and a very warm and kind man, in addition to his proven development abilities. When he was rector of Saint Martin’s he was always called Father Gipson, and their liturgical approach was the more traditional Rite One approach. One chaming thing he would do, though: when he was officiating at a baptism, after doing the prayers of the liturgy and as those who were to be baptized were called to the font, he would ask if anyone else requested baptism, and so I am told, once or twice someone else did come down and receive baptism as well. My wife, who sings in their choir, remarked to me one Sunday that he had preached to the Episcopalians that day on mortal and venial sin, so I knew then that something was going on in his mind. After he came over, he was a great addition to the clergybat Our Lady of Walsingham and his homilies were extremely well received by our very conservative parish. He was very popular. Unfortunately the strain of raising the funds for the New Church at Saint Martin’s, and then similar development duties for the Ordinariate, seem to have contributed to health concerns, so he is now retired and residing in Mobile, AL, where, I am told, he serves as a supply priest as needed at the local Catholic parishes. May God grant him many years.

The current rector of Saint Martin’s, Dr. Russell Levenson, is also a very nice and capable man. His theological approach is more Evangelical than was Fr. Gipson’s, so they may be using the more modern language Rite Two more frequently now. Nevertheless, the choir, which is now internationally known, sings many traditional pieces, such as Mozart’s Requiem, as well as modern pieces. No “praise”music, so popular in many Protestant Churches, however.

I should add that Dr. Levenson has a special friendship with George, Lord Carey, former Archbishop of Canterbury, who, before his recent troubles with the current Archbishop, would come over to do confirmations and the like. When the Saint Martin’s choir was in residence at Saint Paul’s Cathedral in London a couple of years ago, this connection also allowed them, and me, as the Catholic auxiliary and baggage handler, to have a special tour of Highclere, the “castle” (more a stately home) which was the site of the filming of Downton Abbey. Of interest to me there was the heroically sized portrait of King Charles I, known in Anglo Catholic circles as King Charles the Martyr, in the reception room. The Herbert family, who are the owners of Highclere, sided with the King in the English Civil War.

Woody, Dr. Levenson is a graduate of VTS (Virginia Theological Seminary) in Northern Virginia, which traditionally has been associated with the "Low Church" wing of the Episcopal Church (less emphasis on sacraments and ceremony, more on preaching), as has been his home diocese, Alabama (he is a native of Birmingham). Sewanee (University of the South, in Tennessee) traditionally has been more associated with the "High Church" wing of the Episcopal Church (ceremony, smells and bells, etc.)

Maybe Father M. would like to trade his sanctuary for Dr. Levenson's in performing a Mass!!!

It's not Episcopal church, it's One World church that is waiting for "Che" Bergoglio's blessing.

A married Catholic priest? This illustrates how the Church rules are, shall we say, "flexible" if you've got enough clout and powerful friends. Just like the divorce & annulment rules and likely others.