NO REQUIEM FOR A FORMER PRIEST


I know, I know, once a priest always a priest if validly ordained, no matter what twists and turns take place in that priest's life.

Thus it is with the former priest, former Catholic, (I know, I know, once a Catholic always a Catholic) Dr. Bill Cummings who wrote an editorial each Sunday in Macon's newspaper. Often it was a diatribe against the Catholic Church which had betrayed him after the hopeful 1960's when he thought all things would change as radical priests and nuns had hoped in that period. He truly fit the stereotype of a Catholic stuck in the 1960's.

Like so many, and he was one among the many of the 1960's, he eventually left the priesthood and evidently the Catholic Church but always decrying how he longed for the good old days of his seminary preparation and early priesthood in Rome at the time of Vatican II actually happening.

There are so many spirit of Vatican II Catholics his age and older who lost their faith.

He took me to task in his editorials a couple of times as I did to him in letters to the editor. He didn't like being challenged as most progressives don't.

He read this blog and commented a couple of times.

I will offer a Mass for the repose of his soul.

Here's his obituary. Do you detect the saddest part of it? 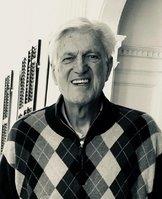 Forsyth, GA- Dr. William F. Cummings is an internationally known scholar, consultant, teacher and speaker. His multi-faceted career has taken him across the United States, Europe, and the Far East, and inside the world's most powerful corporations, as well as its most prestigious universities & hospitals.

Dr. Cummings received his high school education in a California Monastery, and then attended the University of Wisconsin where he earned degrees in philosophy and divinity. At Catholic University in Washington, D.C., he received an STL in Theology and an MA in Semitic Languages, followed by extensive doctoral work in Rome, Italy, where he earned his SSB Re Biblica and his SSL Re Biblica from the Pontificium Institutum.

Upon completion of his formal education, Dr. Cummings held teaching positions at St. Mary's College in Moraga, California, Notre Dame, Indiana, and the Monastery in Oconomowoc, Wisconsin, before entering the business world with TWA in New York. From 1967 to 1975 he was Manager of Organizational Development for Bechtel Corporation in San Francisco, and from 1975 to 1986, he was Vice President for Charter Medical Corporation in Macon, Georgia.

Dr. Cummings retired from the corporate world in 1986 and launched his own companies: Cummings Consolidated Corporation, and Cummings Management Consultants. Through them, he leads seminars, designs and conducts strategic planning, recruits executives, lectures on leadership and customer service, teaches and coaches business and academic chairmen, presidents, and managers, and produces weekly leadership articles. His clients have included universities, hospitals, and physician groups throughout the world as well as corporations such as Bechtel, GEICO, TWA, GFB, Quaker Oats, KFC, BB&T Bank, 13 WMAZ TV, and Heiberg of Norway.

Dr. Cummings is a past president of Macon Rotary Club, past chairman of the United Way of Macon, and has served on numerous Boards such as Wesleyan College, the Georgia Bar Disciplinary Board, the Chief Justice's Commission on Professionalism, the Georgia Bar's Fitness Board, the Georgia Industrial Children's Home, the Macon and the Forsyth Chambers of Commerce, the Macon Volunteer Clinic, & Medical Billing Resources.
He is the author of more than five hundred published articles on Leadership, more than one thousand TV shows on Leadership and the author of "Behind Your Back". His new book is called "My Daily Dose", "a prescription for every working symptom with directions included".

A casual reception and celebration will be held from 5:00 until 7:00 PM Thursday, April 19, 2018 at the Morgan View Farm, 34 Shi Road, Monroe County. In lieu of flowers the family asks that donations be made to the donor's favorite charity.
Posted by Fr. Allan J. McDonald at Tuesday, April 17, 2018

Funny. I'm feeling betrayed because I don't even know where THE Church is anymore, because whatever THIS is, it can't even teach what wa's the "eternal never changing truths" of just a couple of years ago.

Staged q&a with children chipping away at the faith? Oh, but gee the Pope is so cute and cuddly.. and the children's feelings....

You complainers are just rigid neo-pelagians...

Staged! Repeatedly and constantly by this papacy in order to render obsolete anything we might have believed.

Where am I wrong? And why in God's name are clergy silent?

Sad: the obituary denies his priesthood, and doesn’t mention he left the Church to marry. It just lists his many degrees as if he was another theology professional, rather than part of his formation/education in the faith. Lacisized, it’s still dishonest.

It's sad that the obituary omits mention of any Requiem Mass to be offered in propitiation for his sins and for the repose of his soul.

Fr. McD asked regarding the obituary, "Do you detect the saddest part of it?"

There is no mention of God or Cummings' faith or background as a priest, but the obituary is all about worldly success and accomplishments.

Our Lord asked, "And what does it profit a man to gain the whole world and lose his soul?" Mark 8:37

I wonder if Dr. Cummings can answer that question now.

The faith given at the beginning of life is absent at its end.

My friend Gerald, an usher at St. Joseph, also died this week. He was 81. My husband just left the visitation and the funeral is tomorrow morning.

May the souls of the faithful departed, through the Mercy of God, rest in peace.

Thank you Carol, I didn't know. I really liked Gerald. Eternal rest grant unto him o Lord! I will offer a Mass for the repose of his soul.

Thank you, Father. He had a habit of not answering his phone or his door, so he apparently had been dead for a week when he was found. I'm very sad that such a nice man could die alone like that. He had no family, so I will pray for his soul every day for as long as I am able. He was the first person my family met when we first came to St. Joseph and was an immediate friend. We are all grieving.

Oh my goodness! Very sad indeed, but Gerald was a proud Catholic and served our parish so very well!

Interestingly enough, Gerald obituary at Snows is right under Bill Cummings--the least in the kingdom of God is the greatest!