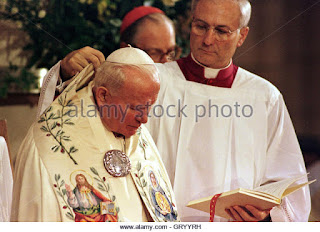 Pope Saint John Paul II died on a First Saturday, April 2, 2005. There is a powerful  devotion to First Saturdays which stems from our Blessed Mother's appearances to three small children at Fatima, Portugal. She asked Catholics to make reparation for sins by attending Mass on First Saturdays and going to confession.

You may also recall that Pope John Paul was shot by Mohamed Ali Acca on May 13th, 1981 the feast of Our Lady of Fatima. After the Pope recovered, he visited the Fatima Shrine and placed in the crown of the statue of our Lady of Fatima the bullet that had penetrated his body in thanksgiving to Our Lady for preserving his life.

The Gospel of this Sunday is about the Church continuing the ministry of Jesus’ Divine Mercy and forgiveness as Jesus empowers the Apostles to celebrate the Sacrament of Penance which Jesus institutes.

It brings me back to that day when the Holy Father went to that stark prison cell and in what looked like a scene from a confessional, offered Ali Acca, the man who shot and almost killed him,  his unconditional forgiveness—a sign of this Divine Mercy that the Pope so embrace and promoted himself. I am sure it was personally difficult for the pope to come to this spirit of forgiveness for his would-be assassin.

Only when you consider how difficult it is to show mercy, can we really then appreciate the mercy Jesus has shown the world, especially in his gruesome execution on the cross and his glorious resurrection. The real mercy that Jesus willingly shows us comes at an enormous price, a price that Jesus, the Son of God willingly pays for love of us!

Though all of us deserve true justice and the punishment due our sins, Jesus Christ nonetheless shows us mercy and love when we repent and seek His Divine Mercy.

One of the lasting legacies Pope Saint John Paul II is that he knew how to temper the demanding truths of our Catholic faith with the love and mercy of Jesus Christ.

When Pope John Paul II became Pope back in 1978, the Catholic Church was in the midst of a monumental transition. As with all major transitions, there was great confusion in the Church and a loss of Catholic identity. Within this context, the pope set out to restore the great discipline of the Church. At times he seemed harsh—he was seen wagging his finger at a dissenting priest in Central America. We saw dictators shaking in their boots in communist countries. We saw him calling Catholics to a strict sexual ethic and a consistent pro-life position, not only for the innocent unborn, but for the living and for the not-so-innocent through his opposition to the death penalty.

Yet, even as he made clear what was sin and unacceptable, he also spoke of the mercy of God. Only when we know the splendor of Divine Truth, the truth of Jesus Christ, do we really see how far we are from Divine Truth and how much in need we are of Jesus who is Divine Mercy. And when we repent and come to the font of Jesus’ mercy, especially in the Sacrament of Penance, we experience that mercy!

We do not believe that Jesus Christ is just a dead hero.  We believe that Jesus Christ crucified and risen is still with us in the Church by the power of the Holy Spirit. We can experience the glorified flesh and blood of Jesus through the sacraments of the Church and through the ministry of the Church. The primary ministry of Jesus is Divine Mercy is the forgiveness of sins. In fact it was this ministry of offering forgiveness that got Him into trouble. He forgave sins and the ultimate act of forgiveness, even for those who killed him, was the crucifixion—Jesus Divine Mercy shown in His flesh and blood. It is no wonder that Jesus gives this same authority to forgive sins in His name to the apostles and their successors and their lowly priests.  The very reason for the Sacrament of Penance lies in the Gospel reading—it comes from Jesus’ mandate that the Church must make visible Jesus continuing forgiveness as the primary fruit of his crucifixion and glorious resurrection.

As baptized, confirmed and Holy Eucharist receiving members of the Catholic Church, we are called to be a people of divine mercy and reconciliation.

The ministry of forgiveness of the Church does not belong exclusively to priests and bishops in the Sacrament of Penance. It belongs to all of us. We are called to make visible and tangible the peace and reconciliation that Jesus has brought to the world.

Many people throughout the world want to see Jesus as “Doubting Thomas” did. The only way any of us will see Jesus is when God makes visible through us His unconditional love and the power of his forgiveness. Forgiveness is a part of Pope John Paul’s legacy of the culture of life. He was opposed to the taking of not only innocent life in the womb of the mother, but also to the taking of the lives of the guilty through the death penalty. Only when we temper justice and the punishment due our crimes and sins do we truly understand the call to imitate Jesus who is not only the God of justice and punishment, but more importantly the God of Divine Mercy for those who seek Him.

Through the eyes of faith, we see Jesus Christ crucified and risen at  Mass. We see him in one another. We hear him in the Word that is proclaimed. We see Him in the priest who represents Him at Mass. We will see Him in the Eucharistic elements. Seeing Jesus should inspire us to be like Jesus and to bring His love, forgiveness, peace and reconciliation to a world in need of Jesus, who is Divine Mercy.
Posted by Fr. Allan J. McDonald at Sunday, April 08, 2018

Indeed, it does seem as though it is difficult to be merciful to all. At the same time, confusion continues.


That was a very good homily you posted for Divine Mercy Sunday.

What is mercy? Is it not love in action? Is it not acting to do good for those who exist outside of oneself?

What is Divine Mercy? Is it not Divine Love in action? Is it not God acting to do good for those who exist outside of his Divine Being?