WHAT THE HELL????? POPE FRANCIS CHALENGING THE CATHOLICALLY CORRECT!!!!!! 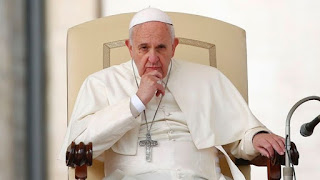 How can the Supreme Pontiff model friendship without proselytizing and thus challenge the Catholically correct? What BS!

And with friends in love with you like this who the hell needs enemies?

Press title for article, my selected sound byte below:

It amazes me that Francis keeps saying he wants “dialogue” within the Church. Yet he refuses to even meet with the dubia cardinals, he refuses to address the million people who petitioned him at that phony synod on the family to uphold the Teachings of the Faith and now he has not even addressed the fact that it has been reported all over the world that the pope has denied the existence of Hell and the immortality of the soul.

If he believes this stuff then come out into the open and say so. If not then why not deny it. And that statement from the Vatican denied nothing.

If anyone I knew was spreading rumors that I said Hell doesn’t exist I would certainly set the record straight. When are the bishops going to do something, anything about what that man is doing. It is becoming clearer and clearer that something is wrong. Why does he keep meeting with that atheist and keep causing worldwide scandal. It is sinful, shameful and unjust behavior. Catholics have a right expect the pope to CLEARLY and without word games teach and defend the Catholic Faith. That isn’t happening with this man.

How is any Catholic supposed to take seriously anything this man says after denying the existence of Hell. How would any believing Christian take him seriously. If he wasn’t a pope but just a priest he would be labeled a heretic and a nut job.

Anonymous - At this juncture, it might be best to not get too upset, acknowledge that the Bergolio papacy is just a moment in time and, be comforted that, ultimately, it too shall pass.

ByzRC, I tend to agree with you. It is hard for me to know what is true and what is fake news when it concerns Pope Francis and because of the internet and the various axes that are being grinned,I think we have to be cautious of attributing too much evil or ill-will to Pope Francis.

But with that said, there are problems he is causing and it isn't fair to everyday Catholics not to mention every day priests and bishops to have to wonder what will be next.

I do find it fascinating that Pope Benedict remains alive during this confusing time representing the Church of fidelity and Tradition and continuity whereas Pope Francis is certainly of the progressive branch and has brought it to new heights considering we all thought it was almost dead and gone.

I just hope that those who were formed under Pope St. John Paul II and Pope Benedict, the younger generation, that this sort of final battle between the orthodox and heterodox of the same age (Benedict and Francis) will produce good fruit and clarity in a subsequent pontificate.

Very wise commentary. You and I are of the same vintage and it is hard to believe that the awful doings of the 60s and 70s are being played out again. Because I was properly trained in the Faith and the liturgy, I viewed the "reforms" with a skeptical eye and was never comfortable with them. I have faith in the younger clergy and Catholic laity to renew the Church. When I attend the EF and I am the old boy in the crowd, my heart fills with joy.

Thank you for your thoughts. Like TJM said, good commentary.

Fr. McDonald asserts: "It is hard for me to know what is true and what is fake news when it concerns Pope Francis..."

No, it's not hard for you to know.

What seems to be hard for you is choosing a reliable source for your information.

What also seems to be hard for you is stepping back from the desire to pass on, without sufficient time for the whole story to come out, what you read in these equivalents of the National Enquirer.

And you seem to WANT to believe the "Alex Jones" versions of news about the Pope that come from sources you KNOW are biased in the extreme.

Rorate Caeli is NOT a reliable source and Fr. Z is not much better. Neither is a news organ - both are opinion organs. Try the BBC, try the NYTimes, keep following CRUX of CNS.

The BBC a reliable source? You must be joking!

Go over to Father Z and debate with him. You will have your head handed to you. He doesn't suffer fools