IN THE CULTURAL AND RELIGIOUS REVOLUTION OF THE 1960'S, MOST BABY BOOMER CATHOLICS AND NON CATHOLICS IN CATHOLIC SCHOOLS WERE READY FOR A MORE HUMAN, FRIENDLY AND LESS SEVERE CATHOLIC CHURCH, SCHOOLS AND LITURGY!

What we baby boomers called the "old" Mass captured the look of the nun in the above link, thus we loved the more human nuns Vatican II mandated as well as a more human, friendly, flexible Mass.

The perceived affective friendliness of the Presider and other "ministers" of the Mass was heavily promoted in the 1960's and '70's by liturgical theologians like Fr. Eugene Walsh, SS.

Thus not only did Mass facing the congregation result in creating the cult of the personality of the priest presider with the good presider being the opposite of the nun in the link above, with Liturgical theologians like Fr. Walsh, leading the way to a doctrine of affectivity!

This photo captures the personality "doctrine" to a t: 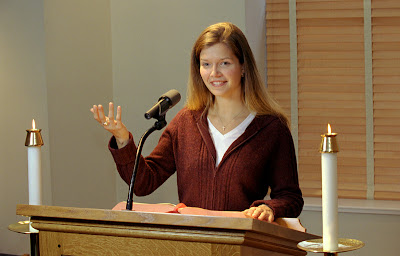 Baby boomer Catholics after being oppressed and repressed by severe nuns and liturgies couldn't get enough of
a freeing, happy clappy  nun or liturgy!

Can the EF and OF Masses find a happy and serious middle ground between the Divine Person of Jesus Christ, who has two natures, human and divine?
Posted by Fr. Allan J. McDonald at Saturday, April 14, 2018

No. Why not? The hypostatic union, that's why not.

While there are two distinct natures, they are united in the one person of Jesus Christ.

EF - Exhibits a perfect balance now. (Whether or not it did in some imagined former time.)

OF - No way. It's inextricably mired in the human. Balancing it with the divine would be like ramming a peg into a hole of the wrong shape. Just doesn't work. But those who've devoted their lives to the failed experiment of Vatican II and the OF will understandably persist in the quixotic effort until the(ir) bitter end.

Is the second picture supposed to be a nun? Well, were I a few years younger, impure thoughts would have blotted out whatever she may have had to say.


Man, in his being and existing, is able to perceive meaning and purpose in his life and in the the other which is outside of himself, and he can come to know through the grace of God, that his own life, as well as others, has meaning, purpose, significance and dignity which transcends functional existence. Human beings, in the nature we possess and were created with, can correspond in a profound and meaningful way with the other outside of ourselves. In its highest form, this correspondence with the other outside of oneself is what we know as love, and in its preeminent form, in our relationship to our Creator. Human life, no matter it’s circumstance, has meaning, significance, and purpose; and this meaning, significance, and purpose ultimately derives from the fact that we were created by God, and we were created to know, love and serve Him.

It is the “I” of awareness of being, in man's created existence and in his corresponding self, along with the gift of provided grace, that enables man to respond to the “Thou” of the Creator; to God’s Divine Love and His supernatural correspondence with us. It is with body and soul that God created us, and it is through both that we are to know, love and serve Him. It is a gift of our Maker that we have been made as we are, and provided with what we have,and this because our Divine Creator desires us to have a relationship with Him which encompasses the wholeness of our created being.
In the incarnate and glorified body of Christ is God in an inseparable unity with the Divine and human natures, in the fullness of His essence and holiness, without limits to the unbounded "length and breadth" of His Divine totality. God, in the Person of his Son, took on our human nature for our benefit, and at His resurrection did not cast it off, but gloriously did ascend with it into the Realm of Eternal Heaven. Christ suffered and died in His humanity and God was ever glorified, and this so that man himself could be redeemed and glorified in both his body and soul.

In a certain and mysterious way God also resides in His Holy Church, in the faithful members of the Mystical Body, and in His teachings and sacraments through which grace is imparted and made available for doing what He desires of us. it is in doing what God desires of us, and becoming the person He wants us to be,that we acquire holiness which serves the preeminent purpose in us of corresponding in an efficacious way with His Divine and Merciful Love.

Sister's picture actually made me nervous, just like they scared me back then. But it was a different time. People I knew had lives that were generally more difficult. We walked a half mile to school no matter the weather (no, not uphill both ways, but we are so soft today IMHO.) Maybe those nuns were sent to teach us how to endure? I dunno, but the bad fruits of the 60's are evident to me. The majority aren't going to church, don't know their faith, accept sin, and won't be told anything. People weren't like that back then. Thank you Father. I would recommend the Byzantine liturgy as between extremes. Christ is risen! Indeed he is risen.

In your picture of the V2 Council above, all I see are elites, making decisions for the common people such as on how to worship God. Without a consideration of the sensus fidelium, one need not wonder what went wrong.

Where is the evidence that 'boomers' (those born between 1945 and 1955) couldn't get enough of happy-clappy liturgy? Reactions from me and my contemporaries ranged from indifferent curiosity to outright contempt.

Let's look at the liturgical revolutionaries who are supposed to have energized the flower-power generation. Bugnini, b.1912. Botte, b.1893. Antonelli, b.1896. Cellier and Gelineau, comparative youngsters, b.1922 and 1920 respectively. And Paul VI, b.1897, the year of Queen Victoria's Diamond Jubilee. Youngsters taking a cue from their parents and grandparents? I don't think so.

As for Eugene Walsh, b.1916, his view of the Mass was plainly heretical, but the Vatican was totally unconcerned, preferring to persecute the orthodox Archbishop Lefebvre. For this reason alone, Paul VI is not, and never will be, a saint. Pope Francis (about whose own orthodoxy there are grave doubts) may preside over an elaborate ceremony to claim he is one, but we are not fooled, and one can suppose that neither is God.

I am one of those baby bookers who lived during the big change. Unlike my peers, I did not like it. It was obviously pandering to the lowest common denominator and anyone with a minimum of critical sense could smell it a mile away. And, unlike my peers, I have remained in the Church and continue to attend Mass.

The great puzzle for me is that the generations that came before me, who were far better educated in their faith than I was, seem to have embraced the revolution with more vigor and intransigence than I would have ever predicted.

The only thing that makes any sense to me about it is that beneath the veneer of age and wisdom there lies a widespread resentment of Tradition and obedience. The most damaging part of Vatican II was the post-conciliar mainstreaming all the voices of dissent that had been brewing for many years. Pius X tried to cage them. John XXIII and Paul VI, unlocked the doors and threw away the keys.

With the Francis effect showing itself by the numbers in the recent Gallup Poll on young people attending Catholic Masses, we now have Francis even going further to marginalise Catholicism everywhere through in his overt belief in Universalism, that everyone will be saved, including atheists as long as they are good people. Only a Modernist Vatican II church would make it possible for a pope to believe that works are more important than faith, that "Extra Ecclesiam nulla salus" is a mere mediaeval fantasy unfit for the modern world, and for which Fr L. Feeney was rightly ostracised before this Council (the Modernists were well at work before the Council):