As anyone who reads this blog knows, I am a liturgical liberal (not progressive) loving both forms of the one Latin Rite, Ordinary and Extraordinary Forms, as well as the Ordinariate's Rite Missal not to mention the various rites of the Mass in the Latin Rite and of course in the Eastern Rite.

I pray that one day the common thread of all the rites of the Church will be ad orientem.

There is nothing to prevent an Extraordinary Form Mass from being celebrated facing the congregation or toward the nave as was done historically at St. Peter's Basilica prior to the council.

Thus a liturgical progressive (not liberal) could celebrate the EF Mass facing the congregation as happened in the 1950's.

But ad orientem for all forms of the Mass only makes sense and takes the emphasis off of the celebrant and places the emphasis on prayer and spirituality and the divine truth that the ordained priesthood transcends the human priest's looks, demeanor and personality and places it on Christ.

In ad orientem Mass the particular priest doesn't matter, it could be the pope, bishop or any number of other priests. It is Christ the High Priest who matters. 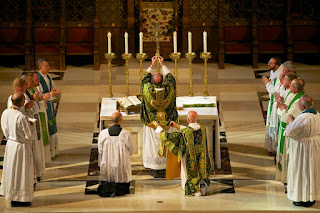 And of course this is only logical: 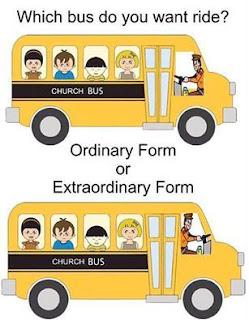 Fr. M: "I pray that one day the common thread of all the rites of the Church will be ad orientem."

What percentage would you attach to the likelihood of that day coming in your lifetime?

Fr. M: "I pray that one day the common thread of all the rites of the Church will be ad orientem."

LOL. I guess you can back the bus up until such time that you hit something!

No you have made it quite clear you support the party of intrinsic evil - the Dems!!! where abortion is their chief sacrament, followed by Gay "marriage."

Only in your mind...

It's not nice when priests lie about their beliefs!!!

Kavanaugh, stop trolling and have the honesty to post under your own name. I'm surprised Fr AJM allows anonymous trolls on his blog, and you are an egregious example.

The sad thing is, you actually believe you are being clever.

Methinks you are concerned about the wrong things.

People who write "methinks" should be banned from the internet and exiled from all public discourse.

Kavanaugh, Kavanaugh, thanks for providing an apt description of your postings here!

Marc - Methinks only anonymous trolls should be banned.

Returning to ad orientem ... Let me mention the 1 pm EWTN live telecast of the Solemn Pontifical EF Mass to be celebrated this coming Saturday (April 28) at the original high altar in Washington’s Basilica of the National Shrine of the Immaculate Conception to commemorate the 10th anniversary of Summorum Pontificum (only the second such TLM there in the past half-century).

The broadcast will begin in a seldom seen way, with Ab. Alexander Sample vesting and saying his vesting prayers while a youth choir sings in the background. He will be assisted by four FSSP priests, two ICKSP priests, and two diocesan priests serving as sacred ministers for the Mass.

HERE is the program that will be distributed to those in attendance. The proper prayers and readings will be those of a Votive Mass of the Immaculate Heart of the Blessed Virgin Mary in Eastertide (cf. August 22 in the Proper of Saints in a 1962 hand missal). The polyphonic Ordinary will be sung by the choir of the Basilica of the National Shrine, while the Gregorian propers will be chanted by the schola of Washington’s St. Mary of God Church.

In addition to the Mass itself, the program includes a number of beautiful nuggets describing aspects of the traditional Roman rite.

Now we know that Kavanaugh is a fan of the musical "Annie!" I could see him as Miss Hannigan