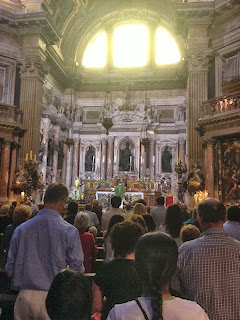 This weekend while attending Mass in Napoli I had two diverse experiences. On Saturday at noon I attended Mass in the Blessed Sacrament Chapel of Chiesa Gesu Nuovo, a Jesuit Church and an ancient one and quite beautiful.

It was the daily Mass for Saturday, but a Mass from the special collection of Masses for the BVM. There were about 50 of there. The Jesuit priest without servers or lectors did it all himself, although the Italian participation from the congregation was good and after all that is the most important role for any lay person what they do from the pew!

Then Father gave a sermon lasting 20 minutes on "peace" since the first reading he had chosen from Isaiah the prophet prophesied the "Prince of Peace" who would come as a future reality.

Father went on and on about peace in our hearts, in the world, in the church, in our families. There were several homilies in that sermon. I listened intently to Father since I seldom get to hear sermons in Italian. I understand it very well, but my vocabulary is a bit stunted, so I don't know some words and have to put things together, but I got most of what he was saying.

It was good to look at him as he was preaching to us. There is an important engagement that takes place between the preacher and the one who listens. It is important to establish eye contact and appear to the preacher to be agreeing or to be interested in what he is saying.

But for the prayers the priest prays to God on our behalf, that is a different question altogether. I did not want to look at Father's face or facial expressions during his prayers, especially the canon. What is there to see? I found it distracting to me to have to look him in the face during prayer and almost an intrusion into something that is both highly personal, although a public act, but also for us.

I find myself not looking at the priest at these times and focusing on other things or close my eyes.

Then on Sunday I attended Mass a the Duomo in Napoli, the Cathedral of Saint Januarius. I wanted to go back to the Cathedral and personally thank Saint Januarius for healing my bad knee and putting it back into proper alignment or back in joint. It is functioning marvelously.

I felt he was one of us in the congregation, facing the same direction as we and it was less clerical and not about him or his facial expressions. As you can tell from the photo I had to stand at the back of the chapel. We were all facing The Lord together including the priest who, called from the fully initiated laity, represents us all at the altar. This is marvelous and it didn't depend on one priest, he could have been me, the pope or the cardinal of the Archdiocese of Napoli! It didn't matter!

I was not distracted and gladly looked toward him at the altar and his gestures there spoke volumes. The Mass was all in Italian, but universal nonetheless. A non-Italian speaker could have had their English missal and followed along as one might do in the Latin Mass. But it was the same Mass.

He did do some rubrical things that I do not do when celebrating the OF ad orientem. After each consecration, he turned to the congregation to show the Host and Chalice. However for the "Through Him, With Him, he elevated these high with his back to us. I can see why he did what he did. The consecration elevations are for us to see and the Through Him elevation is toward God.

He also faced us for the Pater Noster which was wrong since he turned away from the consecrated elements there. Over all it was a simple Sunday Mass in a spectacular setting. Thank you Saint Januarius!
Posted by Fr. Allan J. McDonald at Monday, September 30, 2013

The rubrics for the NO are a bit vague for the second part of the Mass, the Liturgy of the Eucharist; one priest I know turns to the congregation for the Preface dialogue, but remains ad orientem for the Our Father. I do notice that during the Pater Noster some in the congregation adopt the "holding the imaginary beachball" posture, and would be intrigued to know where it originated. Did someone see Mahometans in prayer and think "Gee, that's cool, I think I'll do that next Sunday" and others copied it because they thought it to be correct?

Henry, yes it's a possibility, but the psalms have been around a long time and this is a very recent affectation. Preferable to holding hands, though!

It is a bleed-over from protestant charismatic nonsense. They like to reach for heaven and wave their hands all over the place. Priests need to start telling people that the oracular gesture is a Priestly gesture and it is a liturgical abuse for laity to use it. Besides, it is silly and annoying to the rest of us.