TWO MAJOR CLARIFICATIONS FROM POPE FRANCIS SINCE "THE BIG INTERVIEW" 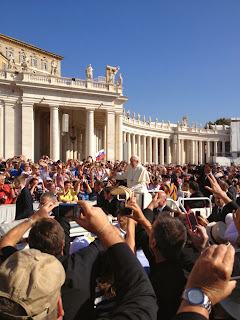 The very good but somewhat muddy interview leaving Catholics who want Episcopal Church liberal politics and ideology especially as it concerns pelvic issues, women priests and gay marriage gleeful and giddy, Pope Francis has clarified where the Church and thus where he stands concerning these hobby horses of ultra progressive post Catholics, those imbued with heterodoxy and heteropraxy.

The Holy Father the day following TBI, spoke in no uncertain terms about abortion being a scourge.

Then a couple of days later he excommunicates and laicized a priest from Australia who in defiance of the Magisterium promotes women's ordination, same sex marriage and the like.

In TBI the pope said he was once very authoritarian. He might not admit it, but he still is. Rather I should write that he has redeemed his authoritarian streak for authoritativeness.

It is interesting to see and hear through their loud silence how the post Catholics high flying just a few days ago, ecstatic as they were, are not commenting on these two post TBI developments.But that's the way it is with them, they are touchy, feely and rely on emotions for everything. They really do like to hold hands and sing Kumbaya with tears in their eyes when it is going their way.
Posted by Fr. Allan J. McDonald at Thursday, September 26, 2013

We'll, this Priest may have just been so up front with his unbelief that the Pope had no choice. Had he been quieter about it, well, maybe it could have been ignored...like it is in hundreds of other cases of the very same thing.
In other news, the Washington Post is having an orgasm
over the Pope's "de-emphasis on harsh institutional authority" and his "subversive spirit." The jury on this Pope is still out. I still do not trust him.

I think that's sort of the point in a way Gene. Heretics who keep their heresy to themselves won't be discovered. We live in an age though when they won't. People feel self important and empowered to go out and revolutionize everything, even religion (you should read the priests comments post excommunication).

Pope Francis has made it clear her is not shy from employing every remedial tool God has given the church. He has made clear the church will not sit silent in the face of open heresy.

Perhaps it would help if so-called “progressivists” and “traditionalists” would both learn how to read and to listen with an open mind and heart so that they would not project their own preferred meaning into Pope Francis’s words, for example, in TBI. Then presumably “clarifications” would not be as necessary.

In short, doesn’t the reader/listener have some responsibility to put the Pope’s words in their proper context – for example, a context that assumes the teachings of the Church as set out in the CCC? It isn’t exactly rocket science.

A Pope's words should not leave people around the globe scratching their heads. His words should not be subject to such vastly different interpretations, with major news venues rejoicing over his "subversive style" or his "rejection of harsh institutional authority" and Priests and Catholic spokesman everywhere apologizing and clarifying. This is not what we need in this relativistic anti-Church culture where media and the enemies of the Church (excuse the redundancy) seize upon any misstatement, any careless phrase, or any ambiguity in order to sway public opinion and manipulate the faithful.

I understand the problem, Gene, and it is one that has infected the entire culture in the West, especially over here in the States, and I suspect in many other places in the world too. Perhaps it is a human problem that is just exacerbated by modern technology, the 24/7 news cycle, and the social media. What you say – “media and the enemies of the Church (excuse the redundancy) seize upon any misstatement, any careless phrase, or any ambiguity in order to sway public opinion and manipulate the faithful” – can just as easily be said about politics. And one of the worst manifestations is taking words out of their context. But please don’t blame the Pope because others murder the language.

If Jesus were back on earth today, He would need an agent to train Him in the proper use of sound bites, make sure He had the right “image,” and otherwise pandered to the paparazzi and other media vultures. Somehow I don’t think he would go for that idea. Wait, perhaps He_is_ back on earth, in the form of the Holy Spirit guiding Pope Francis, just as Father McDonald suggests in the next thread.