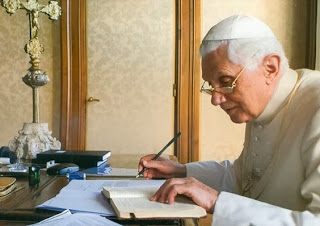 THIS IS FROM THE VATICAN INSIDER AND SHOWS POPE BENEDICT ISN'T GOING TO FADE INTO OBLIVION. HE'S ON THE SAME PAGE AS POPE FRANCIS AND CERTAINLY POPE FRANCIS IS SECURE ENOUGH AS A MAN AND AS THE REIGNING POPE TO ALLOW HIS NEXT DOOR NEIGHBOR THE ABILITY TO STILL BE PUBLIC. I THINK THIS IS REALLY COOL AND AS SO MANY OF YOU KNOW, I HAVE A DISCIPLE OF JOSEPH RATZINGER AND GRIEVE THAT HE DIDN'T DIE IN OFFICE, BUT THE HOLY SPIRIT MAY THINK WE NEED TWO POPES AS MY NEXT DOOR NEIGHBOR AT THIS JUNCTURE OF SALVATION HISTORy

BENEDICT XVI WRITES TO ODIFREDDI
Benedict XVI gives prominent mathematician Piergiorgio Odifreddi a slap on the wrist in a letter published by Italian newspaper “La Repubblica”
MARCO TOSATTI
ROME
After Francis’ letter to Eugenio Scalfari, the founder of La Repubblicanewspaper, it’s now Benedict XVI’s turn to send one. Ratzinger has written a letter to mathematician, media buff and religion critic, Piergiorgio Odifreddi. Odifreddi, who is particularly critical of the Catholic faith, wrote the book “Caro Papa ti scrivo” (“A word to you dear Pope”) in response to Ratzinger’s work“Introduction to Christianity”.

Now Benedict XVI has replied to him. His letter was too long for La Repubblicanewspaper to publish in full but will feature in a new book by Odifreddi, who must be pretty happy to be publishing what he defined as “a one-off in the history of the Church: a dialogue between a theologian Pope and an atheist mathematician.”

“Church, do not keep silent about evils but let faith leave a trail of light.” This phrase sums up Ratzinger’s rich and profound theological thinking.


Odifreddi intended “Caro papa ti scrivo” as a “satanic introduction to atheism”. The mathematician, who has appared on numerous television talk shows sais he was surprised to receive a reply from Benedict XVI, in which he “expressed gratitude for my faithful treatment of his book. This is all one could have hoped for and more in a world where we are used to expecting the bare minimum.”


In the Pope Emeritus’ 11-page-long letter he says he “found some parts [of Odifreddi’s book] enjoyable and useful. But I was shocked by how aggressive and thoughtless some of the arguments are”. First of all, Ratzinger rebutted Odifreddi’s claim that theology is science fiction. “Science fiction is present in many sciences,” Benedict XVI said, giving some examples: “The great Jacques Monod used certain phrases in his work which he must have added, purely as science fiction. “Tetrapod vertebrates exist… because a primitive fish “chose” to explore the earth but was only able to move around by hopping around clumsily, thus modifying its behaviour. It was this selective pressure that apparently gave tetrapods such robust limbs. The running speeds of certain descendants of this bold explorer, this Magellan of evolution, can exceed 70 Km per hour.”


Benedict XVI reacted strongly to Odifreddi’s comments regarding child sex abuse in the Church. “I have never tried to cover these things up. The fact that evil is able to penetrate so deeply into the interior world of faith, is a cause of great suffering to us. On the one hand we must bear this suffering but on the other we need to do all that we can to prevent such incidents from occurring again. It of no comfort to hear from sociologists that the percentage of priests guilty of such crimes is no higher than the figures registered in other similar professions. But this deviant behaviour should not be ostensibly presented as a filthy crime that only exists in the Catholic Church. Most importantly, although it is right to expose evil in the Church, one must not turn a blind eye to “the shining ray of goodness and purity that the Christian faith has brought light to the world over the centuries … It is as true today as it was yesterday that faith inspires unselfish love, service to others, sincerity and justice.”


But what Odifreddi got a real slap on the wrist for, was his comments regarding history. “The remarks you make about Jesus are not worthy of your scientific standing. Presenting Jesus as if we knew nothing about Him and as though nothing certain could be said about his status as a historical figure, I can only advise you and strongly so, to be a little bit more thorough in your historical research. I especially recommend you to read the four volume work co-written by Martin Hengel (an exegete of the Faculty of Protestant theology at Tübingen university) and Maria Schwemer: it is an excellent example of historical precision and extensive historical information. In comparison to this, your comments about Jesus appear rash and should not be repeated.” Although Ratzinger admitted that the critical interpretation was lacking in parts, he firmly rejected Odifreddi’s accusation that he (Ratzinger) had apparently presented the historical and critical exegesis as an instrument of the antichrist. “By talking about Jesus’ temptations I was merely referring to Soloviev’s theory, according to which historical and critical interpretation can also be used by the antichrist – this is an indisputable fact.”


Ratzinger ends his letter by asking some questions rather than answering them. “If you want to replace God with “Nature”, the question remains as to who or what this nature is. At no point do you provide a definition of it. This makes it seem like some irrational divinity which does not explain anything.” “I would like to point out, however, that in your religion of mathematics, there are three elements of human existence which you do not discuss: freedom, love and evil. I am amazed to see that you have completely left freedom out, when it is a core value of our modern age.” There is no mention of love or evil in Odifreddi’s book either. “No matter what neurobiology may or may not say about freedom, it plays a determining role in the real drama of human history and must be taken into consideration. But your mathematical religion offers no information about evil. Any religion that ignores these fundamental questions is empty.”
Posted by Fr. Allan J. McDonald at Tuesday, September 24, 2013


God gave man an intellect to understand the mechanisms of Creation and whatever transcendent things
He chooses to reveal to him. The same intellect that God gave man to develop and understand

mathematics is the same one necessary to understand and know God and what He has revealed to us.
God in His generosity, in the way he created Existence, gave man an
inexhaustible field (in the all that is contained in Creation) for the intellect of man to study. He

The intellect and rational mind of man is necessary to acquire a higher order of knowledge which is
necessary to grasp (even if in some limited way) what God has revealed to us.
There is an intelligibleness to the Universe, to Existence-at least something about it that our

intellect finds comprehensible and knowable. Man discovers the intelligence of Creation and so in

this way recognizes the imprint of the One who created all things.

creatures. The rational mind is not necessary to objectively exist but it is a necessity in

understanding what God reveals to us.
To some in science and philosophy, reality is just a reference frame, a “reflection” of what exists
which we perceive as observable phenomena through our senses, but beyond which
no transcendent truth can really be known. Reality is just the constantly changing construct or
representation of our perceptions.
Having faith in a Superior Being enables man to move beyond the constraints and limitations imposed

by trusting in science and philosophy alone.
Man is a being that has the capacity to make judgments, to know what justice is, to be aware
of his existence. to create, to have compassion toward others and feelings such as joy and
sorrow. Justice, for instance, demands that we accept that all human beings, men and women alike,
as having an equal dignity. Any philosophy or system which developed from man alone could not be
depended on to accept this proposition unequivocally, because man, without the recognition of
a Higher Source for what constitutes justice and fairness, would then determine what these terms
mean and how they are to be applied and this could leave men subject to those who were in
positions of power, but who were without a faith in God. We see what can happen in this way by
looking at the last century when atheistic and pagan philosophies came into positions of power
in certain countries, the end result being vast death and destruction.