AT THE END OF THE VIGIL FOR PEACE, POPE FRANCIS AND HIS GOOD FRIEND AND COMPANION, MSGR. GUIDO MARINI HAVE A LIVELY CONVERSATION AS THEY WALK UP THE STEPS OF ST. PETER'S! IS POPE FRANCIS TELLING MSGR. MARINI TO PREPARE FOR A PAPAL EF MASS? YOU LOOK AND YOU REPORT WHAT YOU THINK THE CONVERSATION IS ABOUT!

It seems that there is genuine affection between these two diverse men whose tastes in liturgy differ. I suspect Msgr. Marini has had to struggle with Pope Francis' truck driver tastes in liturgy, compared to the refined tastes of Pope Benedict. Yet these two seem to have worked out their differences and like one another. These two pictures are from World Youth Day in Brazil when the Pope arrive for an event: 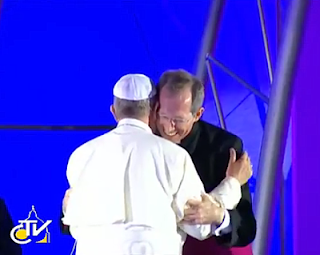 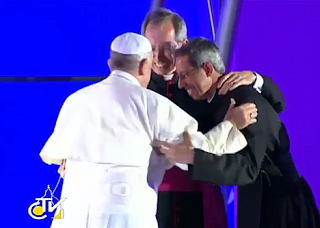 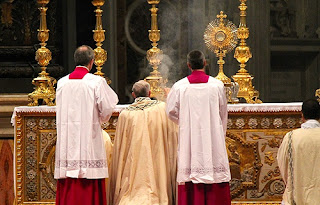 This is the entire video of the Vigil which only last 4 hours and 7 minutes. But if you want to see the exchange between Pope Francis and Msgr. Marini after the Vigil, go to hour 4, minute, 5 and second 24. Tell me what you think this conversation is about:

"Let's see Pelosi chew on this a while "

But, my God, what a colossal bore! I couldn't have stood more than ten minutes of it. That dreadful woman prattling along interminably in what I assume was Italian (it might have been Spanish, and I can tell the difference, but had lost interest long before).

Even the Te Deum, that great hymn of praise which should be belted out in Latin by the universal Church was mumbled in Italian, led by the same wretched female. How long, O Lord, how long?

Oh, and the great burning brazier, tended by the holy virgins of the flame - I encountered this last year in ND de Paris at an attenuated Vespers of the Assumption, and thought it thoroughly neo-pagan.

Back to sanity, albeit in the Ordinary Form. Solemn Mass this morning at the Oxford Oratory, ad apsidem (which in their case is geographical west) and in Latin. Haydn's Missa Sancti Nicolai. Two motets by Bruckner, Locus iste and Ave Maria. Two splendid traditional hymns. God's in his heaven, all's right with the world. At least in this small island which according to the Russians nobody takes any notice of. Come to think of it the last time we fought the Russkies we kicked their arse good and proper.

John, here in my corner of Alabama USA, we had the Missa primitiva setting with the Gloria, Sanctus, and Agnus Dei in Latin. We sang "Faith of Our Fathers" as the Processional and "O Lord Of Heaven, Whose Love Profound" as the Recessional. Accompanying the meditation after Communion was "O Salutaris Hostia" chanted in Latin.

The homily included some ideas I haven't heard from a homily, ever. It was an exposition on the necessity of making choices instead of engaging in a Hegelian dialogue with evil, especially in the context of not attending "weddings" that are invalid. And, yes, the priest actually used the phrases "mortal sin" and "Hegelian dialogue". He is in the midst of giving a series of homilies on understanding Good Friday as the definition of love and that any attempt to otherwise define the term is hollow and meaningless.

I'm so happy I found this parish. To keep my sanity, based on your description, I think I'll pass on watching this video of the pope and continue to try to keep the faith by paying as little attention to the pope as possible...

Yo, Marc. Because it was the Birthday of Our Lady and also the 20th anniversary of the establishment of the Oxford Oratory the Mass was of Our Lady. The Gospel was the genealogy of Jesus in Matthew 1, and the sermon, delivered in the usual deadpan Oratory style, was deliberately hilarious since he concentrated on the women in the list. The point he made, though, was quite serious.

I wondered about that conversation myself.

I also noticed that while the people's seats were full, the cleric and dignitary seats were half empty. It made me wonder if the Pope asked the good Msgr to take note of who was there and who was absent.

It was a bit long, but my oldest son and I were happy to participate from our living room. It made Saturday feel like a Sunday, somehow, and we felt blessed for it.

Hey Marc, what area of Bama do you live in if you don't mind me asking. I am from Tuscaloosa but do not live there anymore, so when I go back I usually go to one of the parishes there, however, your's sounds so much better, as the two parishes there are pretty bland IMHO.

Anonymous, I live in Montgomery.

But, there is good news for you if you venture back to Tuscaloosa! There are two TLM parishes in the Birmingham Diocese - one is exclusively TLM every day (in Huntsville) and the other has a TLM each Sunday (in south Birmingham). I understand from the Una Voce folks in Birmingham that they are attempting to set up another weekly, Sunday TLM in Tuscaloosa, but I don't know any details about that or when it'll get going.

Bishop Foley will be offering a High Mass in Tuscaloosa in October. He offers a High Mass about once a month at the parish in south Birmingham.

Here's the link with all this information: http://www.unavocenorthernalabama.com/announcements/2013-08-01-d.html.

I agree with Carol H.

P. Francis: Msgr?
Msgr Marini: Yes, Your Holiness?
P. Francis: Take note of who was and wasn't here. Don't invite the absent ones to the Christmas party.

"Pope Francis' truck driver tastes"? How DARE you! I had family members who drove trucks. They were intelligent, hard working, honest, loving, generous, humble, Christian Catholics, who led exemplary lives....not pompous, supercilious, elitist, pretentious, patronizing, wannabe big shots. Who the hell do you think you are?

Alabama, often chided for backwards by it's eastern neighbor, moves light years ahead of Georgia is it's TLM growth. Here it's still nothing but crickets and tumbleweeds when it comes to the TLM.

Unfortunately, that growth is mostly due to the influence of EWTN. So, it isn't happening in my diocese or within my driving distance...

Templar, whutchu talkin' 'bout? In Georgia, we don't even kill Rattlesnakes if we see 'em leavin' Alabama!
Hear about the new Alabama state motto..."Our hearts and our homes are double-wide.'

How can one be a Catholic and "pay as little attention to the Pope as possible?

Heck, progressives call themselves Catholic and pay as little attention to dogma and doctrine as possible...

How can one be a Catholic and "pay as little attention to the Pope as possible"?

The same way everyone did until the advent of mass media. Or like in those first 1,000 years when the pope didn't claim universal jurisdiction. Or like when there were three popes.

Do you think most people even knew who the pope was for the vast majority of Catholic history? If they had, do you think there'd be as many Catholics on earth as there are?