POPE FRANCIS MAY BE THE SUCCESSOR OF SAINT PETER, BUT HE IS VERY MUCH PAULINE IN HIS MISSIONARY THEOLOGY AND STYLE! 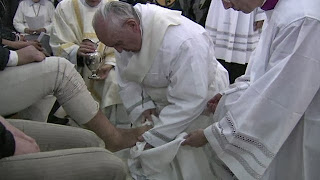 My next door neighbor, His Holiness, Pope Francis, is the successor of Saint Peter, no doubt.

This week in our Institute of Continuing Theological Education at the Pontifical College North American at the Casa O'Toole, we have a Jesuit Scripture scholar, who teaches at the Pontifical Gregorian University here in town, an American, Father Scott Brodeur. He is wonderful and he loves Fr. Raymond Brown who I had when I was at St. Mary's in Baltimore, and subsequently for workshops later after I was ordained.

Fr. Scott points out in this passage that Saint Paul becomes all things to all people; he has made himself a slave to all in order to save "some" but not "all." In doing so the purpose is to allow God's grace to transform all, justify all who receive it.

Now it seems to me this is what we see Pope Francis doing and those who do not understand Paul and his great missionary activities, won't appreciate Pope Francis and his perspective and are freaking out over the Pope seemingly becoming all things to all people, a slave, if you will, to all depending on who you are.

In Saint Paul's time, those who most vehemently opposed his method of evangelization were those who were fundamentalist Jewish Christians. Paul's rivals are the Judizers who want the Mosaic Law to remain in place for all Christians, even those who convert from being Gentiles. They want circumcision, the dietary laws and the Sabbath day to be Friday night to Saturday not on Sunday. These are the "thorn in the flesh" that St. Paul experiences in his rivals, but this forces him to think things through better.

Isn't this what Pope Francis is doing with his rhetoric, being all things to all people to hook them and reel them into the Church where then they will be formed properly by the traditions and sources of our Catholic faith both in orthodoxy and orthopraxis!

Conservative, fundamentalist Catholics are giving the pope the hardest time. Could it be that they completely misunderstand Pope Francis' hermeneutic based on the passage of St. Paul I quote above?

If you listen to Pope Francis he calls us all to the CCC for more formation. Pope Francis in this regard follows a sort of RCIA format: inquiry, cathecumenate, election, initiation, on-going initiation as neophytes and then as seasoned Catholics.

Of course, this is followed in Chapter 10 with very strong warnings against immorality, idolatry, and weakness in the faith. We need to be careful in our exegesis lest we imply that we must become gay to win gays, a whore to win whores, an abortionist to win abortionists, or a heretic to win heretics... or, do we become protestant to win protestants...see Vatican II.

I was thinking he was quite Pauline too. He reminds me a lot of Paul VI, the great liturgical innovator who had little or no regard for what came before him or why. If Pope Paul gave us the New Springtime in the Church, it looks like Francis is about to deliver the Long Hot Summer.

I very much enjoy following your posts, especially ever since the beginning of Pope Francis' pontificate. It seems to me yours is the only blog amongst those I follow that (A.) promotes the faith and morals taught by the Catechism of the Catholic Church, (B.) promotes joyful appreciation for the Roman liturgical tradition, and (C.) speaks coherently about Pope Francis. I know there are blogs that do one or two of these things well, but your does all three well.

A blog that formerly told us what prayers really say was once my favorite, but it seems lost and meandering in the post-BXVI age. Yours, however, still seems purposeful.

Thanks for leading the way!

Part and parcel of Ignatian-Jesuit spirituality as exemplified by
Matteo Ricci and Francis Xavier among others.

I am still thinking that there is more to Pope Francis' statements than meets the eye. I think his statements are almost diversionary, to get the sinner to feel not threatened by the Church, but welcomed. He invites our strongest opponents to come read and contemplate our values. It also gives us another weapon to fight sin without killing the patient. I think he is not saying what Gene says, especially when he follows up his news-making moments with hyper orthodox statements about abortion, etc.

My meditation in this regard revolves around 'meet and just' with the root in 'dignity'. The sinner holds on to false glamour when he needs to have dignity. We tend to block them from dignity through oppressive contrition and it distracts and pushes them away. I think I am understanding what he is trying to do when I see it through the Spiritual Exercises.

I'm no great admirer of Paul VI, but to say that he "had little or no regard for what came before him or why" is to do him an injustice. Like many leaders-in-waiting he was not really up to the job, although I think had he been elected in 1958 (which he would have been but for Pius XII's denying him a red hat) we would have seen reform, but no revolution. He would certainly not have called a General Council; when John XXIII did, he remarked "I hope the old boy knows what he is doing". A man of stronger will would not have recalled the Council in 1963. In retrospect this was the single greatest mistake of his pontificate. In the last ten years of his reign he witnessed the Church collapsing around him, her liturgy in ruins, her foreign policy misguided (the notorious Ostpolitik), and his one decisive act as pope, Humanae Vitae, derided by many and ignored by most.

Such was the confusion that a bizarre conspiracy theory went the rounds in the 1970s, backed by photographic "evidence", to the effect that the Modernists had kidnapped the real pope and put a lookalike stooge in his place. A more recent "theory" is that he was a practising homosexual who was being blackmailed.

In truth, he remains an enigma, although it can be argued that his reform of the Curia, which effectively 'internationalized' it, was his greatest achievement.

Perhaps you are right that it is unfair to declare that Paul VI had little or no regard for what came before him or why. The reason I wrote that is because that's the only conclusion I can draw from his rationale for rupturing with the past and imposing the Novus Ordo on the Church. And keep in mind, NO ONE IN THE CHURCH, AT LEAST AMONG THE LAITY, ASKED FOR SUCH A CHANGE.

"...the Mass is regarded as the traditional and untouchable expression of our religious worship and the authenticity of our faith. We ask ourselves, how could such a change be made?"

In an audience a few days later on November 26, he said:

"...a new rite of the Mass: a change in a venerable tradition that has gone on for centuries. This is something that affects our hereditary religious patrimony, which seemed to enjoy the privilege of being untouchable and settled...This NOVELTY is no small thing...We are parting with the speech of the Christian centuries; we are becoming like profane intruders in the literary preserve of sacred utterance...We have reason indeed for regret, reason almost for bewilderment. What can we put in the place of that language of the angels? We are going to give up something of priceless worth. But why? What is more precious than these loftiest of our Church's riches?"

His answer convicts him of his own naive disregard:

"The answer will seem banal, prosaic. Yet it is a good answer, because it is human, because it is apostolic. Understanding of prayer is worth more than the silken garments in which it is royally dressed. Participation by the people is worth more--particularly participation by modern people, so fond of plain language which is easily understood and converted into everyday speech."

Of course, history proves just how wrong poor Pope Paul was. The Novus Ordo did not increase participation, but only formatted it into loud responses, irreverence and banal music, all imposed on those who desire a deep interior participation and struggle to do so amidst the clangor of the noise. Every Catholic understood the action of the liturgy before 1969 because every Missal had the vernacular translation side by side with the Latin. So while Islam, Judaism, Hinduism and the other large religions retained their sacred languages, Pope Paul, cast ours aside. And we are not better off for it.

Pope Paul believed that mankind should influence and transform the Church and Pope Francis seems to indicate the same mindset. Our Church is meaningless unless it influences and transforms mankind. We follow a religion because we seek transcendence. God is the same yesterday, today and forever. No one is attracted to a religion that changes with every new thing.

So for me Paul=Francis=More of a Church stuck in the mud of its own ineptitude. Our Cardinals knew they were electing a modernist when they gave us Francis. He is their reaction against Benedict, the pope they resisted and ignored. At the next conclave, we should trust our cardinals less and pray and sacrifice more.

Agreed, Anonymous. Paul VI's remarks at the beginning of Advent 1969 are among the oddest ever uttered by a Pontiff, and make one wonder whether he was suffering from some sort of mental breakdown. Apart from anything else, he seems to be under the impression that a vernacular Novus Ordo was about to replace the Latin Roman Rite in 1970. In reality, the Mass had been entirely in the vernacular in most places since 1967, by which time it had been changed to the extent that it could no longer be understood as the Roman Rite.

There is also the remarkable fact that he signed into effect the new Lectionary without even reading it, saying that he trusted its compilers absolutely. Pius X and Pius XII meddled with the liturgy (not always with happy results) but at least they knew what they were doing. Paul VI seems to have abdicated responsibility almost entirely. Did he believe that Bugnini's Consilium was guided by the Holy Ghost and had a divine mandate to implement the Council's intentions? He must have been aware that Sacrosanctum Concilium was essentially the Bugnini draft, so the reformers were implementing their own agenda. Quite astonishing.