THE SENSE OF REVERENCE IS EVERYTHING 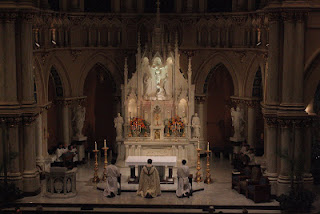 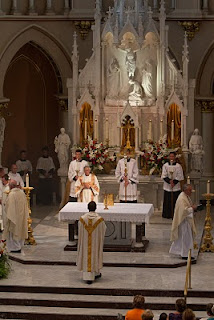 St. Joseph parochial vicar, Fr. Dawid Kwiatkowski received this email the other day. I share it with you as it concerns St. Joseph's 9:30 AM Pro Populum Solemn Sung Ordinary Form Mass:

...I attended your 9:30am Mass. I just wanted to send you this quick note to say how extraordinarily beautiful and enriching I've found your parish to be when I pass through Macon between Florida and Kentucky.

Yesterday's 9:30am Mass in particular was most edifying - the fine musicianship, the sweet dismissal of the children for their special liturgy, the deeply reverent Mass itself, the wonderful opportunity [as usual at St. Joseph] to actually kneel and receive Holy Communion on the tongue [with paten], to your own splendid homily.

I thank you with all my heart.

I have a deep devotion to St. Joseph himself. May he continue to cover you and all at your church with his own most powerful prayers before the throne of God.

MY COMMENTS: As everyone knows, I love the EF Mass and its reverence most of all, not necessarily the Latin, although I'm glad we are now preserving Latin by celebrating the EF Mass. As per my previous post, prior to the EF Mass, I would not have known a few phrases if a planted spy suspected that I was a faux priest. Therefore, prior to the EF Mass which Pope Benedict only released to the general public in 2007, I might have been strangled and my body thrown down a ravine with the planted spy saying as he threw my body down the ravine, "You don't even deserve a burial." But the sad thing would be that I was a priest but only celebrating the OF Mass in the vernacular and thus not knowing Latin unbeknownst to this SSPX Mass goer, planted spy. It would be a tragedy which Summorum Pontifcum would avert!

But I digress, the topic is reverence and Ordinary Form Masses in the vernacular can be and should be as reverent as any EF Mass. Now that we have the new glorious English translation of the Mass which is actually faithful to the Latin text for the Ordinary Form Mass, we have built in reverence. That is a big, big plus!

When the Propers are chanted, that is a plus toward reverence.

When altar servers know what they are doing, when the complete Mass is chanted, when incense it used, all these make for an edifying liturgy to give glory to God and to help those who worship during the Holy Sacrifice to do so with great care and REVERENCE.

The option of kneeling for Holy Communion for those who are called to do so also helps. But no one is forced. Standing remains the norm. We even have those who choose to kneel to receive Holy Communion receiving in the hand. They place the host in their mouth as they are kneeling, thus in front of the minister, and depart only afterward! Kneeling to receive on the hand is more reverent too!

Would it be possible to do the EF in English. It would be interesting so we humble lay folk can hear the language and compare it to the OF. I know you say its the same but its not exactly the same.

It is not permitted to have the EF Mass in the vernacular. Pope Benedict only authorized the 1962 version of the Tridentine Mass. There is a transitional missal of 1965 that has a tremendous amount of English, and could be used if authorized by the pope or requested by national conference of bishops for use in their country. However, no permission for this has been granted anywhere that I know of.

A thought just occurred to me: why do the two forms go to extremes with language? The EF is exclusively in Latin, while the OF is (usually) exclusively in the vernacular? I know some don't like "Missa Mixta," but is it really THAT bad to have vernacular readings, MAYBE the Gloria, because of its length, in the vernacular. The rest of the ordinary could be in Latin.

So you can have a clown mass but not the EF in the vernacular?

Ironic and sad, no?

I wonder if I am right in perceiving one unfortunate consequence of The confluence of the resurgence of the EF and the reverent new English translation of the OF missal--a decrease of Latin pccurence in the OF. With the Novus Ordo in Latin even rarer than before, and the Ordinary now less often sung in Latin at vernacular Masses.

Before SP I had regular (at least monthly) opportunities to attend Latin OF Masses, but now only on special occasions like funerals, when families request a more traditional Mass and probably think an ad orientem Latin Novus Ordo in black Roman vestments is actually a TLM. And whereas local parishes frequently had at least the Kyrie (Gr.), Sanctus, and Agnus Dei in Latin at daily OF Masses I attended, now apparently have switched to the new English translation for these. So the net result of SP and the new English is less Latin in the liturgy. Generally so everywhere?

To be fair, an EF in the vernacular probably wouldn't be an EF for long since many priests just can't stand to simply follow the rubrics...

Heck, many OFs aren't even OFs for the same reason...

Henry, I agree. When I was in Augusta I celebrated regularly the OF Mass in Latin except for the readings and these were sung Masses. At my current parish I was planning the same thing starting in 2007. I purchased the most up to date Latin Roman Missal, shipped from Italy and then SP came about. Seems odd to do the OF all in Latin when you have the EF option.

It seems that if there are parallel forms of the Mass and Rome wants a natural confluence of the two. The EF in the vernacular would form natural development of the liturgies into one.

The corrected translation has removed what was for me one of the main objections to the English Mass. Since there is less of a disjunct between the English and the Latin it should theoretically be easier to mix them. One parish I know that used to sing Mass XVIII in Latin now do so in English, so Henry might have a point. However, this was in the context of an otherwise vernacular Mass with hymns, and at least they now sing Gloria XV in English rather than reciting it. The London Oratory has switched its daily 8am (said) Latin Mass from OF to EF, but has changed a later OF Mass from English to Latin. It must be the only parish church in the world which offers EF, Latin OF and English OF every day of the week.

Why do some, priest or lay persons, behave irreverently at Mass? Is it because they do not believe that the Mass is a re-presentation of Christ's sacrifice on Calvary? Or is there some other issue in play here?

Some, even Priests, do not believe that the Mass is the Real presence. But, to believe that way (or un-believe) and remain in the Church means that these people are clever enough to behave at Mass to keep up appearances.
So, most irreverent people are just ill-bred and self-centered.