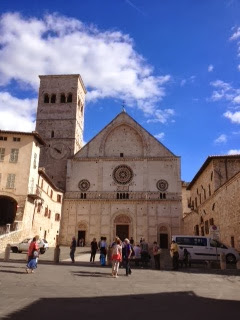 As blessings would have it, my liturgy team was responsible for our morning Mass at Assisi's Cathedral Basilica. We celebrated Mass in the Cathedral's Blessed Sacrament Chapel which is a large Gothic church in its own right.

Our retreat master is a wonderful Dominican Irish priest from Dublin, Ireland as opposed to Dublin, Georgia. His name is Fr. John Harris.

I served as "subdeacon" and main concelebrant and another priest who I may be related to distantly was the "deacon" and other main concelebrant. Fr. Daniel MacLennan is from the Diocese of Antigonish in Nova Scotia and knows many people I know in Cape Breton and was pastor of a small village church in Glenco! My father's brother's wife, Jessie MacDonald was from this parish!

Fr. Dan and I are both related to retired Archbishop James MacDonald of St. John, New Foundland and now living in Ontario. The Archbishop visited me in Macon a couple of years back with his sister and brother-in-law.

But, I digress, the Mass was ad orientem at the ancient altar as no faux duplicated altar was placed in front of it! We celebrated Mass as we do at our 12:10 pm Sunday Mass in Macon. It was lovely and even Fr. John could foresee this manner of celebrating the OF Mass becoming the norm again in the future. He must be clairvoyant like me!

But back to the Dominicans, I went to the Dominican's week long institute for priests in July in Nashville. They are the New York province. And for the last 4 years, I have had Dominican priests from the Western Province give our parish missions. So that is why I say I am becoming Domicanized!