IF ONLY ALL PRIESTS FOLLOWED POPE FRANCIS LITURGICAL STYLE 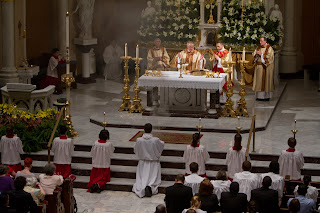 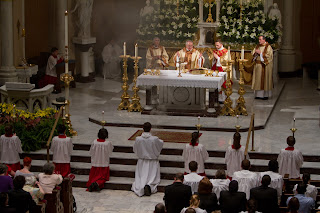 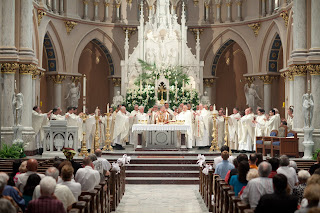 As you know, I believe that all Catholics are called to be papists. Martyrs have died for the pope! So I am dismayed by supposedly orthodox Catholics speaking ill and wanting ill for our Holy Father Francis made Vicar of Christ by God but through the messiness of churchy institutional processes, the doctrine of the incarnation applied to all that is Catholic.

But let's go to is Liturgical example. Like Pope Benedict he hasn't mandated anything for the Ordinary Form of the Mass, the normative Form, except for one thing, the inclusion of Saint Joseph, Husband of the BVM into the other Eucharistic Prayers.

He can't chant, so we can't use this as something that should be imitated.

He says the black and does the red. Although he faces the people, he prays in an "ad orientem" sort of way. In no way does he become affective in prayer by appealing as it were to his audience. He is soft spoken, low voice in his liturgical style.

All his Masses have some Latin somewhere. He is not consistent in his own Latin usage as Pope Benedict. He does not ad lib any part of the Mass.

Every priest has his own tastes in liturgical vesture. Mine are much more like Pope Francis than Benedict. But no one is prevented from choosing vestments from the liturgical traditions of the Church. I have only a handful of vestments that I own. I purchase vestments always for the parish which remain when I go. I usually pick styles that go with the style of the church building.

But while Pope Francis has reduced the ornate papal style, he has chosen the name Francis after all, he is very austere and traditional in praying the Mass, self composed and contained. Oh that all bishops and priest would follow Pope Francis liturgical style.