READING POPE FRANCIS NOT THROUGH BENEDICT BUT THROUGH LIBERAL DRIVEL

The danger with Pope Francis off-the-cuff remarks and less than clear rhetoric (which Jesuits were once well trained prior to the Council) is that he can be read or spinned  through whatever and who ever and any kind of ideology, some very, very distant from Catholic truth.

Thus one would hope that the advisors to the Pope, especially those in America, like Cardinal Sean O'Malley will see this kind of spin and alert the pope. It is this kind of spin, not only in terms of the image below but in many other "culture" issues of the day, that Pope Benedict helped the Church Militant to confront and we were recovering from the disastrous pastoral theology of the 1970's that threw the baby out with the bathwater in terms of the faith and morals of the Church and teaching these unambiguously.

At any rate, here is a sign of the danger that Pope Francis "rhetoric" can cause to the faithful, especially those formed by the coloring book Catholicism of the 1960's and 70's. Let us pray that Pope Francis is aware of the American problems that may not have been present in South America! 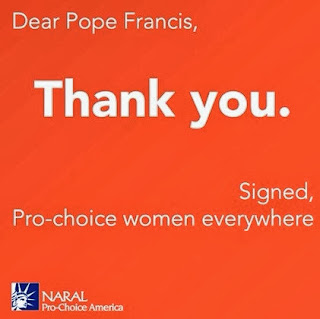 When Jesus, Peter or Paul preached the authorities were ready to criticize or stone the speaker. Our Pope speaks the representatives of the modernist, atheist MSM are swooning in delight.

The Church is in need of leaders who say yes or no as the situation calls for because everything else is from the Evil One.

Perhaps the Cardinals were bored and elected Francis for the entertainment value...

The only good thing of this that I can think of is if now they actually start LISTENING to the Pope.

oh yeah, one more thing...this shows how shallow and frantic they are..to quickly react so stupidly without actually pausing to understand what the Pope is actually saying.

But then again, if the world loves the Pope..and starts paying attention to him, just think what could happen!