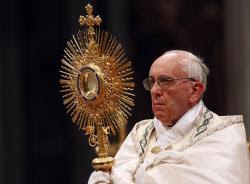 This past Sunday I celebrated our 7:45 AM Mass. Afterward, I went to my office and listened to Pope Francis Angelus Address at the Vatican YouTube site. I heard him proclaim that next Saturday (today) would be a day of fasting and prayer for peace in Syria and its surrounding area in the Middle East. He gave no specifics about his prayer vigil in St. Peter's Square, nor the time for it. But I thought, we have three more Masses and I should unilaterally decide how St. Joseph Church would join the Holy Father in praying and fasting for peace.

So, quickly before the 9:30 AM Mass, I consulted with Fr. Dawid Kwiatkowski to make sure there wasn't anything planned for today at 12 noon when we would have our prayer vigil. I then quickly wrote up an announcement to be read at all the remaining Masses and it went something like this:

Of course, I had no idea at the time what Pope Francis would do during the Vatican Vigil. His vigil is actually a true vigil and lasts much longer, but today I saw the content of this vigil:

5:45: Priests will hear confessions under the colonnade of Saint Peter’s Square.

6:30: Pope Francis’ appeal for peace will be read aloud.

7:00: The Pope begins the prayer service as Veni Creator Spiritus is sung. The icon Salus Populi Romani will then be processed into the Square, carried by four Swiss Guards.

Pope Francis will then lead the recitation of the Rosary, followed by a meditation.

After a period of silent meditation, the Holy Father will then preside over Eucharistic Adoration, during which there will be readings from Scripture and responsorial prayers.

Following the guided period of Adoration, there will be the recitation of the Office of Readings from the Liturgy of the Hours.

10:15: A period of silent prayer will be held before the vigil concludes with Benediction.

MY COMMENTS: When I was in the seminary in the late 1970's we were being taught as was the rest of the rank and file Church that devotions were denigrated by the Second Vatican Council's spirit. Yes, we were taught that. We were told we should not pray the rosary, but have Bible Services instead. We were told that we need only go to Jesus in prayer not through the Blessed Virgin Mary or any of the other saints. The "cult" of the saints was mocked by those in the know about the spirit of Vatican II.

The Holy Eucharist was food and drink to be eaten and drunk, not something to be viewed and adored, so adoration of the Blessed Sacrament in the tabernacle was not encouraged, the tabernacle was moved out of sight and out of mind and there would not be Benediction of the Most Blessed Sacrament since this only developed with adoration in the Middle Ages.

Basically, the popular devotions of the Church were jettisoned by clericalists in the Church who told people who love popular devotions that they should only go to Mass, make sure to receive Holy Communion no matter what and pray the Liturgy of the Hours and attend Bible Services. This was pre-Vatican II clericalism in the most clerical post-Vatican II way possible--the complete denigration of popular devotions, many of which don't require a priest or deacon, but simply a lay leader and can be accomplished privately or in the home or with others.

Thanks be to God whose grace is stronger than silly clericalists' academics in the Church popular devotions are making a coming back and have been doing so since Pope John Paul II's Marian devotion and naming of more saints than all other popes combined.

The Holy Rosary is very popular. Many parishes have perpetual adoration or some time for it every day and Benediction of the Most Blessed Sacrament are returning. Parish novenas are finding a place and, yes, the Liturgy of the Hours is still promoted and Bible Services are a part of Benediction.

Progressive gnostic Catholics would dismantle the spiritual and devotional life of the Church and they almost succeeded. Pope John Paul II, Pope Benedict XVI and now Pope Francis will have none of it. In fact Pope Francis' desire for the laity to recover popular devotions is on steroids. Thanks be to God!

I well remember an American Jesuit priest in the 1970s dismissing adoration of the Blessed Sacrament as "cookie worship". Of course, the Vatican in those days was too busy persecuting Archbishop Lefebvre and cosying up to Communist regimes to bother about heresy.

Is it surprising that I have little time for Vatican II or Paul VI?

There was a priest in my 1970's seminary who called adoration and Benediction "Canninite Cookie Worship!"

Father, has a new topic been selected yet for Wonderful Wednesdays? Catholic Piety and Popular Devotions would be a wonderful topic, and we could use traditional prayerbooks instead of textbooks. Each month of the calendar has its own devotions attached to it (June- Sacred Heart, etc.) so the topics would be easy to select.

Wouldn't this be an easy way to reintroduce Catholic piety and devotions in our parish?

Fr. Godfred will take the fall one and focus on Mariology which he will soon have a PHD.