BACK IN MY ROOM IN ROMA WITH PERFECT WIFI AND NOW FOR MY DAY TODAY AND THAT POPE OF OURS EVANGELIZING THE WORLD THROUGH DIALOGUE, ENCOUNTER AND CONTROVERSY AND STRONG WORDS FOR PROTECTING THE POOREST OF THE POOR, THE UNBORN!

I have finally learned how to upload photos to my iPad and then get them to my blog! Alleluia! Up until now it has been by accident and I had to do the accident over and over again, and now I know how to do it! Praise God. These are pictures I took today of the Basilica of Saint Francis in Assisi and the lower chapel where his tomb is. The tomb is visible above the altar. Also, please read the entire post and my take on Pope Francis and his stirring the pop of Catholicism and making us all talk, including the media! 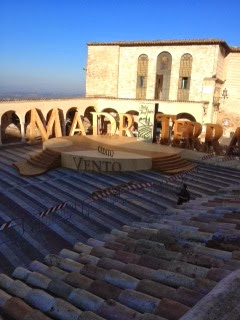 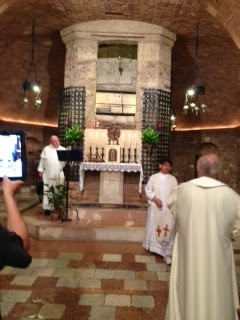 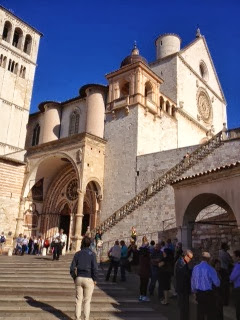 We began the day in Assisi and had early Mass at the tomb of Saiint Francis in Assisi. There are about 35 of us priests and we sit as concelebrants in the congregational areas of these chapels. The Mass today again was ad orientem in the Ordinary Form with Domincan Father John Harris and principal celebrant and homilist.

As we gathered I began to vest at the pew where I would sit. There was a lovely couple sitting in the pew in front of me. The wife asked in English is Mass was going to be celebrated. I said yes, and normally the laity need to sit behind the concelebraing priests as she asked me what they should do.

The husband then said, I suppose if we stayed here it would look like we are con-celebrating. I said, if you do, I won't tell.! Then they went to the back of the chapel, really just a few pews back.

But let's get to Pope Francis quckly. The progresseives in the Church are absolutey apoplectic with joy and irrational jubliation about the liberality of the pope. I'm not sure I would describe him that way. I would say he is pastorally liberal for he loves people, all people, and this is the Gospel of Christ and the teaching of the Church. But he is with the Church in what the Church teachess about abortion, contraceptioin, fornication and adultery no matter one's orientation. He is for the Catholic Sacrament of Matrimony built upon Scripture, Tradition, Natural Law and Canon Law.

He simply doesn't want to brow beat people and thus keep them away from Holy Mother Church, our Blessed Mother and the grace of God in the Church and her sacraments which are life changing. When we acknowledge God loves us, saves us, accepts us, His grace can change our lives and he chips away at our inablity to say yes to God in all things. Free will uncomporomised by sin enables us to say yes to God. Yes to God is the ultimate act of freedom! He leads people to discover what the Church teaches in the Cathecism. He says go and see what is taught and it is taught lovingly but unambiguously.

He said, Pope John Paul II opened the hearts of Catholics to the love of God, especially the young who loved him.

Pope Francis is the pope who is calling us to bring all this to the world and in an uncompilicated way.

This is what Fr. Z thinks about Pope Francis and his methodology which is quite unique in the history of the Church but needed at this time and this place:

This is what I think Francis is up to.

Francis’ pontificate is going to be about evangelization and putting a motherly face on the Church.

I suspect that, while he is Pope, Francis doesn’t want to see the words “Vatican condemns” a-ny-where.

I think that Francis thinks that constant correction and condemnation does more harm than good. BE CAREFUL NOW: Francis said “all the time”. He did not say “we should not talk about these things”.

And as Scarlet O'Hara would always say, "Tomorrow is always another day." And thus today, the Holy Father, Pope Francis had his strongest words of support for the teachings of the Church to protect the human embryo, the unborn child from the sin of abortion, that terrible evil inflicted upon someone loved by God from all eternity and made in the image and likeness of God:

Here are Pope Francis' words today. He must have gotten the message that he must be stronger in defending the poorest of the poor, the innocent unborn. This statement will not disappoint!:

Each one of us is invited to recognize in the fragile human being the face of the Lord, who, in his human flesh, experienced the indifference and loneliness to which we often condemn the poorest, either in the developing nations, or in the developed societies. Each child who is unborn, but is unjustly condemned to be aborted, bears the face of Jesus Christ, bears the face of the Lord, who, even before he was born, and then as soon as he was born, experienced the rejection of the world. And also each old person and - I spoke of the child, let us also speak of the elderly, another point! And each old person, even if infirm or at the end of his days, bears the face of Christ. They cannot be discarded, as the "culture of waste" proposes! They cannot be discarded!

I have followed and enjoyed your blog for some time.
This is the first time I have left a comment.
I would like to thank you for your often wise and thoughtful words.

My mother is 78 and is a quite devout, practising Catholic.
She too now enjoys reading your blog.