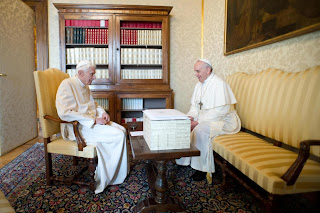 John Allen that wonderful reporter for that horrible paper, The National Chismatic Reporter, NCR, has some sobering thoughts for irrational Catholics on the left and the right. On the left, they are just down right giddy and unfortunately, quite delusional.

On the right, you'd think Hans Kung is behind the Francis mask. Delusional too!

This is what John Allen writes today:

At the level of content, there's not much groundbreaking in the interview with respect to his hour-and-20-minute press conference aboard the papal plane July 28. He offers the same blend of traditional doctrine with a deep emphasis on mercy, stressing that the church needs to be more pastoral and less judgmental in engaging questions such as abortion, homosexuality and women.

Perhaps most fundamentally, it represented a breakthrough victory for the Catholic middle.

Truth be told, the liberal wing of the church will be cheered by the new pope's language -- his rejection of a "restorationist" mentality in Catholicism, for instance, and his insistence that "thinking with the church" cannot simply mean thinking with the hierarchy. At some point, however, they'll demand movement from rhetoric to policy, and on that front, many may be disappointed.

Francis has twice now uttered a firm "no" to women's ordination to the priesthood, and he's unlikely to radically change teaching on matters such as gay marriage, abortion or contraception. A desire to project a more merciful tone on those matters isn't the same thing as disagreement with their substance.
That leaves the Catholic middle as the pope's natural constituency.

In broad strokes, these are people generally content with church teaching and tradition, though inclined to a hermeneutic of generosity in applying it. They don't have a chip on their shoulder about authority in the church, though they're also not inclined simply to shout "hosanna" every time someone in leadership speaks. They're eager for reform, not so much for revolution.

Mostly these are people who regard Catholicism fundamentally as a force for good in the world and who long for moderate, accessible and inspirational leadership who can lift up the whole gamut of Catholic thought and life rather than a selective version of it tailored to advance a specific political or theological agenda.

In a nutshell, that seems to be more or less Francis' aspiration.

Why does one feel that all this talk is going to end badly?

Being in the middle and avoiding extremes holds a lot of attraction for me. It is certainly the place I feel most “at home.”

As to what Pope Francis is “up to,” here are two contrasting “liberal” or “left-wing” perspectives on Pope Francis:

And Chris Hayes in the first link reiterated his view again last night (All In with Chris Hayes on MSNBC). (And before people jump all over me for watching Chris Hayes, yesterday evening I also watched Piers Morgan on CNN and Sean Hannity on FOX – being “in the middle,” I engage in equal opportunity self-abuse =)).

“But given the constraints of what being pope is, you can operate in one of two ways: you can be a jerk about it, or you can be awesome. And this guy is choosing to be awesome. And not only is that great for the Church, it’s great for the world to have a pope talking about what this pope is talking about: grace, humility, peace and compassion for others. Because that is the Church at its best, and the one that some part of me still loves.”


Earlier in the piece Hayes explains:


“Now, I have a confession to make: like millions of other people in this country and around the world, I was raised Catholic, but stopped going to Mass—my freshman year at Brown, to be exact. And while I still have affection for the church of my childhood—the smell of incense, the saying of the Our Father, and all of the rituals—I haven’t felt very warmly about the institutional Catholic Church, to say the least, in the years since. But somehow, this guy, Pope Francis, is turning me around.”


So, all this tells me that the Holy Spirit is indeed at work here. Without compromising the fundamental teachings of the Church (check out Singleton's reaction in the second link, for example), perhaps Pope Francis is reaching people like Hayes, even if he is not reaching those like Singleton (at least not yet). Who knows, perhaps Hayes and other former Catholics like him will come back to the Church, while others will be drawn to the Church for the first time. And let’s not forget that Jesus dined with publicans and sinners and was condemned by the “religious” people of His day for it. Now, why did He do that? Wasn’t it so that He could tell them about God’s great love and mercy and the gift of salvation in a way in which they could actually “hear it”?

Some very bad news. Francis has "demoted" Mauro Cardinal Piacenza, a Siri protege, and one of my top picks to have been elected pope after Benedict.
http://news.yahoo.com/pope-keeps-cleric-leads-nun-crackdown-job-115458940.html

Cardinal Piacenza, much like Benedict and Cardinal Ranjith, is a strong suporter of the EF. I am becoming more and more disenchanted with this pope each day.

Anonymous in Archdiocese of Detroit:

Are you sure this is “very bad news”? What do we know about his replacement Beniamino Stella or about the reasons behind the re-appointments?

Moreover, doesn’t the remainder of the report suggest a more balanced picture, although it is dealing with all appointments, not just one responsible for direction of liturgical development and various other matters (prefect of the congregation for clergy).

On the EF specifically, in his recent interview didn’t Pope Francis characterize Pope Benedict’s decision to allow wider use of the Tridentine Mass as “prudent and motivated by a desire to help people who have this sensitivity” although he did say also that “what is worrying, though, is the risk of the ideologization of the Vetus Ordo, its exploitation.” Despite the caveat, this sounds to me as if Pope Francis is going to support continued use of the EF, as well as the OF of course, which is consistent with staking out a position "in the middle."

I think many of you are trying to put a pretty face on this Pope Francis business. I hope you all are right, but I have serious doubts.


Be warned, when the world loves the Pope he is not doing the job he was elected to do. As Our Lord said:

It appeared, for a time, that Benedict's encouragement of the EF and other seeming returns to a more traditional Catholic identity was based upon a genuine effort to reform the liturgy and encourage better catechesis. That has turned out to be nothing but a flash in the pan. This Pope may allow the Ef to remain as a bone to traditionalists, but it is pretty meaningless overall. Going to an EF Mass is sort of like attending a Civil War re-enactment...it is entertaining, a nice memory, a brief step out of time and into fantasy. But, the Ef is not widely available, it is not a part of regular Catholic life, and the liturgy continues to be degraded in many places. So, really, the EF does not mean very much in terms of any kind of "reform." In fact, I see no serious desire on the part of this Pope or any Bishops, save a couple, to change anything at all. It looks as if we will continue on the modernist trek of social work, idolizing the poor, and protestantizing homilies and propaganda from on high. We are marking time...

The Catholics in the middle are "lukewarm".

Forty years ago there was no internet, Pope Paul VI had not issued an encyclical in five years, and the liberals were in a dominant position.

The present pontificate is not going to be of the same length as those of Paul VI (elected at 63) or JP II (elected at 58). And the liberals are no longer in the ascendant, in fact in ten years' time most of them will be dead. Stop worrying. Compared with 40 years ago the situation is transformed - priests in their 20s celebrating the Old Rite, international liturgical conferences explicitly rejecting a lot of the nostrums of the 20th century Liturgical Movement, a retreat for young Catholics enlisting the help of old-timers like me to help them with the chant for both the Mass and the Office (EF, of course, who'd have thought it then?)

Pope Francis has said that the Church is in good shape. Thanks to Benedict XVI and John Paul II, she is. You never have, as a Catholic, had to live through the dark days of the 1970s.

Rev. 3:17: For you say, ‘I am rich and affluent and have no need of anything,’ and yet do not realize that you are wretched, pitiable, poor, blind, and naked.

Thank you, John Nolan, for that perspective, which serves as an important corrective for those who see the liturgical sky falling because of Pope Francis. That said, however, I am still concerned that the EF is not very widely available. Shouldn’t there be an EF available within easy reach for all Catholics? I am sure there is much potential demand among those who have that “sensitivity” (or should the translation have been “sensibility”?) and who would therefore respond well to the EF and be more spiritually nourished by it than by the OF. (Of course, as a liturgical pluralist “in the middle,” who accepts that different people do indeed have different “sensibilities,” I am very much in favor of the OF as well.)

Thank you, John, for that hopeful information. I did, however, live through the dark days of the seventies as a protestant theology and seminary student. They were equally dark for devout protestants. I suppose I have gotten in on the (I hope) tail end of the dark age of Catholicism and this is all a frustrating deja vu for me. I console myself by reminding myself that I am Catholic because I came to believe that the repository of true doctrine and proper dogma, as well as correct theology, is the Holy Catholic Church. Those things will survive the fads of any age, despite their frustrations. Men like you also give me great hope.

Ben, it depends on what "middle" we mean.

In Christ, the center holds.

That sort of "middle" sounds far from lukewarm.