THIS BOMBSHELL SHOULD BE MORE LIKE A CHILL PILL IN TERMS OF POPE FRANCIS' APPRECIATION OF TRADITION IN THE LITURGY AND THE HOLY FATHER IS SOON TO APPROVE THE ANGLICAN ORDINARIATE MASS WHICH INCORPORATES MUCH OF THE "REFORM OF THE REFORM OF THE LITURGY" THAT POPE BENEDICT INITITATED, AND IT WILL BE THE TEMPLATE FOR THE LATIN RITE REVISION OF THE REVISED POST-VATICAN II MASS NOW CALLED THE ORDINARY FORM 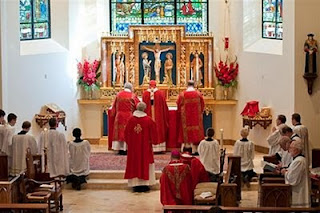 The New Liturgical Movement reports the following, my comments at the end:

Tuesday, July 30, 2013
Pope Francis on the Divine Liturgy: "The center is God..."
by Peter Kwasniewski

With all the talk of Pope Francis, this item, courtesy of Robert Moynihan (http://themoynihanletters.com) should greatly interest the readers of NLM. (Note that this excerpt is from Letter #78, which is not yet available at the above-mentioned website.)
-----------------
Toward the end of the interview, a Russian journalist asks the Pope to comment on the 1025th anniversary, currently being celebrated in Russia, Ukraine, and Belarus, of the baptism of the Rus', the ancient Russian people, centered at the time (988 A.D.) in Kiev.

In response, the Pope makes a very positive judgement on the liturgy of the Orthodox. To my knowledge, this response has been little noted.

"They [Orthodox] have conserved that pristine liturgy, no?" Pope Francis says. "So beautiful. We [i.e., the Latin Christians] have lost a bit the sense of adoration, they conserve it, they praise God, they adore God, they sing, time does not count. The center is God and that is a richness that I would like to emphasize on this occasion as you ask me this question."

At a moment when many are continuing to wonder about Francis' attitude toward the old liturgy of the Church, it is important to note these words of the Pope, which as far as I know have not been noted by any journalist commenting on this long interview.

[Thank you, Mr. Moynihan, for rescuing this statement from the oblivion of the mainstream press!]

MY COMMENTS: Many are concerned about the actions approved by Pope Francis against the Franciscan Friars of the Immaculate in terms of the EF Mass. I'm not completely sure what the brouhaha is in this community other than the EF Mass has been a source of division in the community. The main point of the decree is that their Superior of the Order can allow their priests to continue to celebrate the EF Mass with his permission. I think that is fair in a religious community that does both forms, otherwise you have each priest doing his own thing and I suspect this is the problem that the Vatican addressed. I could be wrong.

But back to Pope Francis remarks on the Eastern Orthodox liturgy and by way of that on the Eastern Rite Liturgy--He's like Mikey, he likes it! What a relief!

What the Holy Father implies in his answer to the Russian reporter is the Holy Father's continuity with Benedict on the Liturgy and that the current expression of the revised Mass after Vatican II, what is now called by some as the Ordinary Form, is that the Ordinary Form lost a bit the sense of adoration, the EF conserves it, they praise God, they adore God, they sing, time does not count. The center is God and that is a richness that I would like to emphasize in comparison to the OF Mass.

I've put a few words into the Holy Father's mouth but isn't that really what is implied and what Pope Benedict's critique of the fabricated liturgy of Vatican II?

From what I hear, Pope Francis is allowing the work of the Congregation for Divine Worship to continue to work unabated. There have been rumors that eventually we will get a revised, revised Roman Missal more like the EF Mass, but revised nonetheless.

Richard Malcolm makes the following comment from the Praytell blog:

Is the reform of the reform dead? It’s plain that Pope Francis is not liturgically minded in the way that Joseph Ratzinger was and is; it is not on his radar in the same way. He has a Jesuitical impatience, I think, with it all. To the extent that RotR remains alive, it will certainly receive less of its animating impulse from Rome – how much remains to be seen. Key Ratzingerians remain in key places in the Curia: to take but one example, the interdicasterial commission on the Ordinariate Missal is wrapping up its work unhindered, and on early evidence it certainly embodies an RotR mindset to a degree scarcely anything else in the last pontificate did.

All of this will have the support of the Supreme Pontiff, the Bishop of Rome, the Universal Pastor, Pope Francis I.

Press here for the Anglican Ordinariates Calendar which will be the template for our revised calendar. It has the season of Septuagesima restored, as well as the Octave of Pentecost amongst other traditional elements.

AND GUIDELINES FOR THE ANGLICAN USE MASS AS OF EASTER 2013, PRESS HERE!
Posted by Fr. Allan J. McDonald at Wednesday, July 31, 2013

Well, let's hope you are correct...I have my doubts...

I don't see this as the great news you think it is. Firstly, the pope said this to a Russian reporter, presumably so it would go out to the Russian people. So I think this is said for ecumenical purposes and not liturgical purposes.

Second, everyone, even the Vatican II deformers, recognize the timeless beauty of the Divine Liturgy. That's why the deformers sought to incorporate elements of it into the Novus Ordo (they were wrong to so so). If the pope believed the Roman Rite should reflect timeless beauty, he would make it happen and wouldn't persist in its agonizing destruction. Alas, his actions speak much louder than words.

I'll propose, though, that if you want me to see this statement as on its face supporting a return to liturgical beauty in the Roman Rite and that the popes words can be read as such, then we must use the same method of taking on its face his other statements - the ones about gay clergy and all the other silly things he keeps saying. In other words, your effort to pick and choose to make the pope sound good are a nice effort, but it rings hollow when considered in the hermeneutic, if you will, of everything else he says and does...

RE: My doubts...what Marc said.

To date, the only Masses I have attended celebrated by priests of the Ordinariate of Our Lady of Walsingham have been in the Extraordinary Form of the Roman Rite. Not that I'm complaining about that.

It is pretty obvious that the Franciscans of the Immaculate were going a little over the board with the Latin Mass... they would separate themselves from ordinary form even refusing to con-celebrate ordinary Masses. This why, i think, the Pope has made the decision to make sure that they are not separating themselves entirely from the practice of the Universal Church which accepted the Ordinary form as the leading form of Mass.

I was going to say exactly what Henry said, except without the French. (I'm am dreadfully prejudiced against the poor French and their language).
Basically, the present view is that the Easterners adore the Almighty in the Divine Liturgy, while we Latins adore God in the Poor. In obedience to Judas Iscariot, we've sold the ointment and given to the poor.