BOMBSHELL! IS THE POPE BRINGING HIS OWN CARRY-ON THE ANTI-FANNON?

POPE FRANCIS CARRIES HIS OWN CARRY-ON FOR HIS FLIGHT TO BRAZIL! IS THE SYMBOLISM OF THIS THE ANTI-FANNON OF PAPAL PROTOCOL? 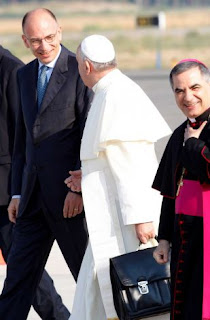 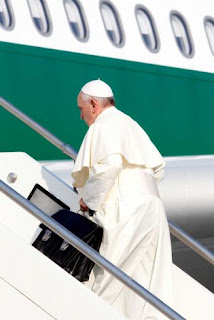 This is NBC's take on Pope Francis holiday:


Visit NBCNews.com for breaking news, world news, and news about the economy

SOME IN BRAZIL AND OTHER PARTS OF THE WORLD THINK THE WAY TO WIN BACK CATHOLICS FROM THE EVANGELICAL, PENTECOSTAL PROTESTANTS IS TO MIMIC THEIR APPROACH TO WORSHIP. BUT I WONDER IF THIS DOESN'T REALLY PLAY INTO THE HANDS OF THE PROTESTANT PENTECOSTALS AND INDICATE TO CATHOLICS A FALSE EGALITARIANISM AMONGST CATHOLICS AND OUR SEPARATED BRETHREN? WOULD IT NOT BE BETTER TO EMPHASIZE OUR OWN TRADITION AND TO DO IT WELL? THIS IS CNN'S TAKE ON THE POPE'S VISIT AND BRAZIL'S ANSWER TO JOEL OSTEEN AND JACK VAN IMPEE: MY FINAL COMMENTS: If you watch the video, this CNN reporter and those who helped her to put the video together show their prejudice, which is really the prejudice of heterodox Catholics who long to go backward to the good old 60's. The formality of the Catholic Mass, with its solemn devotional and spiritual elements is the bad guy causing the Church to lose Catholics to the Pentecostal Evangelicals who have a lively worship based upon the cult of the personality of the minister and the congregation that gets hyped up over worship experienced in an emotional way.

Surely in Brazil, the largest Catholic country in the world, there are traditional Catholic Churches that are full of people, young, old and in between. Would you know this by this story's content? No! You would think that traditional Catholicism in Brazil in on life-support and the only hope for the Catholic Church is a Pentecostalized, Evangelical, Protestant, cult of the personality form of faux Catholicism.

I believe that Brazil also has a strong EF Community in union with Rome.
Posted by Fr. Allan J. McDonald at Monday, July 22, 2013

This kind of "evangelicalism" is even bad protestant theology. It is Enthusiast, Pelagian, and Arminian and should be scorned and rejected by Catholics as it was by good Calvinists and Lutherans. More fruits of Vat II.

What has happened to the emphasis on Faith and Reason, so keenly seen in the last two Papal teachings? Pentecostalism is based on emotional highs and lows, as well as manipulation of the senses. Sadly, people give up Christ in the Eucharist for feeling good.

If the Catholics starting looking and acting like either Evangelicals, or Pentecostals, this will cause confusion. We have the Truth, the Beauty of the Ages--the Mass of the Ages-the TLM

The flaw is that they see this is as a game. They are competing for members which means influence. CNN reporters, politicians and the general public understand religious organisations through their political influence. Many, maybe most, of the religious leaders agree.

In a contest if you simply use the same tactics of your opponent, especially tactics he created, you will lose nearly every time. There is not positive outcome following that path.

There is one area the Evangelicals and Communists do beat us out: they actually make life better for the poor. We talk a lot of blather and simply use the same approach as the Communists. Why put up with all the religious trappings if I can get my food, shelter and job from the Commies. Our Church asks for attendance on Sundays and other inconvenient times of the year. The Commies give me paid time off from work to listen to their story and I only have to attend their place of worship on voting day.

We have an inversion going on: people are being told *how* to live and solve their problems by their religious leaders (the state is also a religion now) yet being allowed to ad lib their worship to suit their situation and attitude. The Catholic Church should be showing the proper way to enter the presence of God, then encouraging people to creatively bring that into their personal lives.

It's sad to see the office of the papacy demeaned by papal behavior that encourages photos and reportage that do so. A denial of tradition that hardly contributes to a restoration of Catholic identity, the loss of which in recent decades has led to so much loss of faith, to indifference and even heresy.

No office, papal or otherwise, is demeaned by behavior that is truly humble and truly human.

Let's see, Anonymous, it is truly human to murder, steal, and lie...

No, those would be dehumanizing activities.

For John Nolan: I will be in London on Sunday, 4 August. I hope I am back in time to attend Mass at the London Oratory. I hope to experience the schola, but it may be later in the day as I am traveling.

Do you have suggestions?

Sinful man is already de-humanized, only to be fully re-humanized by Redemption and, ultimately, Resurrection. In the meantime, our humanity is imperfect and fallen human nature continues to hold sway. Else, we would not need Confession.

No, murder, stealing, lying are not "truly human." They are sub-human activities, not proper to the nature of those made in the image and likeness of God.

That image has been redeemed. Those who lie, steal, or murder are acting in a way contrary to our redeemed nature, contrary to what is truly human.

RCG, suggestions...yeah, bring me back a bottle of Lagavulin 18.

If you are not back in time for the 11 am Solemn Mass, go to sung Vespers and Benediction at 3.30 pm, which are in the Old Rite. There are English Masses at 12.30 and 4.30 pm, and I can guarantee no ad-libbing, altar girls or EMHC!

This turns on your definition of human nature. I understand it to be an anthropological term, which means that violent activities and such are a part of human nature. However, concupiscence remains in redeemed man. We still sin. That is why we need confession and penance. The Image of God is still broken and will only be fully restored when Christ returns. This is called "eschatology." Look it up.

I am only telling you folks about the trip because it will be a 'bombshell' as someone might say: Will and Kate want me to be their baby's godfather, they will name him Richard, and baptize him Catholic.

Human nature constitutes a whole panoply of characteristics and attributes both good and bad. Yes there us concupiscence. I know one speaks of mankind in a general sense when talking about human nature being fully restored at the return of Christ.
However,man has been redeemed by the Blood of Christ and so we can individually become saints in the here and now. Not without co-operation with Divine grace of course.

Sin is not truly human. Sin is a perversion of that which is truly human. Redeemed by the life, death, and resurrection of Christ, we are no longer subject to the power of Satan and sin. If we sin, it is our own free choice to do what we know to be wrong. Sin is not an inevitability. To believe that it is inevitable is to deny the power of God's grace to preserve us from sin.

The true nature of a cup - a small container used for drinking - is that it holds the liquid poured into it. This is what it means to be truly a cup.

The color, shape, size, material of the cup is irrelevant to the true nature of the cup.

A cup with a crack that leaks does not express the true nature of a cup. It expresses the nature of a BROKEN CUP.

"No office, papal or otherwise, is demeaned by behavior that is truly humble and truly human."

At Mass we pray "Deliver us, Lord, from every evil, graciously grant peace IN OUR DAYS, that, by the help of your mercy, we may be ALWAYS free from sin and safe from all distress, AS WE AWAIT the blessed hope and the coming of our Savior, Jesus Christ."

The prayer is for peace IN OUR DAYS, not only when the Lord returns.

The prayer is that we may be ALWAYS free from sin, not only in the life to come.

The prayer is for this to be granted, made real, AS WE AWAIT the eschaton.

Prayer is an eschatological act. The Apostle Paul says, "It doth not yet appear what we shall be." In Romans 7 & 8, he very clearly explains the struggle between the Spirit and the flesh and how our carnal desires still have sway. If we are perfect now, why await Christ's return? Why Confession, why, indeed, the Eucharist?
I still think we are squabbling over a definition of "humanity."

I have neither said nor suggested we are perfect now.

I have opined that what is truly human - and lying, stealing, murdering are NOT truly human - demeans no office, papal or otherwise.

It is certainly dehumanizing.