DOUBLE BOMBSHELLS, HERMENEUTIC OF CONTINUITY BETWEEN BENEDICT AND FRANCIS, JOINT ENCYLICAL ON FAITH, JOINT EXORCISM OF THE DEVIL FROM THE VATICAN! 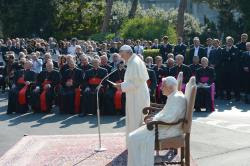 Yes, Pope Francis believes in the devil and has preached about him more that any other recent pope or bishop since Vatican II. Today he asked Pope Emeritus Benedict to join him in the Vatican Gardens in consecrating the Vatican to Saint Michael the Archangel, who defends us in battle against the devil who prowls the world and even the Vatican for the ruin of souls! And to have two popes present for such an unprecedented event is, well, unprecedented.

Following this brief ceremony, Pope Francis addressed those present noting how St. Michael defends the People of God from its enemy par excellence, the devil. He said even if the devil attempts to disfigure the face of the Archangel and thus the face of humanity, St Michael wins, because God acts in him and is stronger.

Pope Francis also entrusted the Vatican to the protection of St. Joseph, praying that he will strengthen and safeguard all who work within the City State.

And then the Encyclical on Faith is being released jointed by the two popes, with Pope Emeritus Benedict the primary author. It doesn't get any better than this folks.

Here are summaries of the encyclical:

BUT FIRST READ WHAT CARDINAL OUELETTE HAS TO SAY ABOUT THE TWO POPES ENCYCLICAL HERE.

READ WHAT ARCHBISHOP MUELLER HAS TO SAY ABOUT THE TWO POPES' ENCYCLICAL HERE.

READ POINTS TO PONDER FROM THE LIGHT OF FAITH OF THE TWO POPES HERE.

HERE IS VATICAN RADIO'S SUMMARY OF THE TWO POPES' ENCYCLICAL, THE LIGHT OF FAITH:(Vatican Radio) Pope Francis’ first encyclical entitled "Lumen fidei" or “The Light of Faith” was released Friday at a press conference in the Vatican. The document completes the trilogy of papal teachings on the three theological virtues, begun by Pope Emeritus Benedict XVI who issued his encyclicals "Deus Caritas Est" on Charity in 2005 and "Spe Salvi" on Hope in 2007.

Announcing the forthcoming publication of his first encyclical, Pope Francis described it as a work of “four hands”, begun by his predecessor, Benedict XVI, who passed on his draft for the new pope to complete. The document certainly continues many of Benedict’s favourite themes, from the complementarity of faith and reason, to the joy of a personal encounter with Christ. Firmly situated in the Year of Faith, it’s also set in the context of the 50th anniversary of the Second Vatican Council, which re-established the central role of Faith at the heart of all human relationships.

Divided into four chapters and a short introduction, the encyclical sets out to show how Faith in the Risen Christ can lead us beyond the narrow confines of individual existence into the all-inclusive community of God’s love. Rather than the notion of ‘blind faith’, which impedes scientific progress and must be kept to the private sphere of personal convictions, we’re called to rediscover the light that can guide all people from the darkness of selfish desires towards a more just and fraternal world, grounded in the faithful promises of God the Creator.

The first chapter takes the reader on a whirlwind tour of the Old and New Testaments, from Abraham, who first hears God’s call, through the Israelites travelling towards the light of the Promised Land, to Jesus’ death on the Cross, the ultimate act of God’s love for humanity. The more we are touched by the transforming power of that love, writes the Pope, the better we are able to understand our relationship to all our brothers and sisters in Christ.

Chapter two insists on the essential link between Faith and Truth, without which our beliefs seem nothing more than a fairy story, an illusion of happiness, unable to sustain us when the going gets tough. Contemporary society, the encyclical says, tends to see technological progress and individual pleasure as the only objective truth, viewing any broader questions about the origins of our existence with deep suspicion. Without love in our hearts, truth becomes cold, impersonal, oppressive, unable to transform the lives of others. But by listening, seeing and believing in Christ’s presence in our lives today, we can broaden our horizons and find better ways of serving the common good. The light of our faith in Christ can also contribute to a more fruitful dialogue with non-Christians and non-believers, showing how all those who search for God or seek for truth will be welcomed and illuminated by that light.

The third chapter of the encyclical centres on the Church as the place where the light of faith is safeguarded and transmitted from one generation to the next. Through the sacraments of Baptism and Eucharist, through profession of the Creed, praying the Our Father and obeying the Ten Commandments, the Church teaches the language of faith and draws us into the Trinitarian relationship of love, so that ‘whoever believes is never alone’.

The final chapter focuses on Faith and the common good and shows how the light of faith can promote peace and reconciliation, and teach respect for God’s creation. The encyclical also considers those areas illuminated by Faith, starting with the family based on marriage, understood as a stable union between man and woman. Faith, writes the Pope, cannot eliminate suffering in our world, but it can accompany us and bring a new sense of hope in God’s love. The encyclical ends with a prayer to Mary, Mother of Jesus and icon of faith, who can lead us into the light of God’s love.

READ THE FULL TEXT OF THE TWO POPES' ENCYCLICAL AT THE VATICAN WEBSITE BY PRESSING HERE! 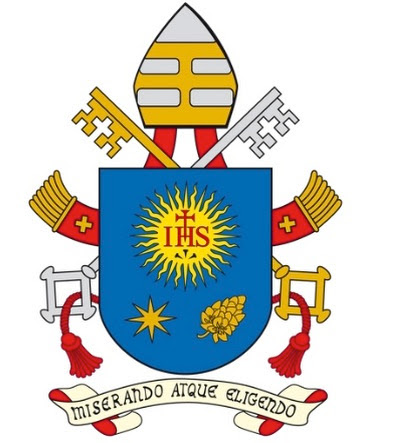 It really appears to be just a re-affirmation of orthodox Catholic belief, the strength of it being that it is a joint re-affirmation by two Popes. It will be dissected, re-hashed, refracted, analyzed, de-constructed, and gleaned ad nauseum by media geeks and Vatican groupies. Gee, can't wait...
I repeat that, until these high-sounding pronouncements are re-embodied in a proper Liturgy and a chastened Priesthood and Bishopric...nothing to see here.

It would be interesting to conduct a historical study--maybe there already is one--of the number, purpose, and contents of encyclicals, apostolic letters, and other papal pronouncements through the centuries. Those of the past 35 years seem VII in character, by which I mean pretty much what Gene syas--they function as extended evangelical "homilies" on the general nature of Catholicism and the Catholic life rather than addressing relatively specific problems of liturgy, doctrine, heresy, schism, etc. As such, they become, as Gene notes, food for analysis, comment, and such by the ivory tower while dealing almost not at all with problems of governance, at a time when thee problems are running rampant.

Hmm... consecrating the Vatican to St Michael. Could we expect to see the consecration of Russia to the Immaculate Heart of Mary on Oct 13 in union with all the bishops of the world????????

I don't feel as negative nor as conflicted about him. I need to read the encyclical, as yet, but I do think we are being very impatient with Pope Francis and his actions. Did he bring any staff with him from Argentina? If he is going to clean house, does he fire the lot of them? And who will run the joint until her replaces them all? Would they be Italians? Would they all be Argentinians? That is a dangerous way to manage and lead. He needs to be diplomatic, he needs to set an example of how this sort of thing is done and he needs to have good people he can trust to give him information. Keep in mind that everyone of those needs are currently filled by same people that ran off Pope Benedict.

The forces that Benedict fought think that they have won by humiliating him. They were not i hiatus, they had simply gone underground and are now resurfaced. Hopefully this document, by the manner it was created and released, also an indication that Pope Francis has information from Benedict himself about who is up to what and where. Any plan still needs to be developed and that is what Benedict did not feel he had time to do. I think he wanted to personally tell his successor what he could trust to his staff to tell for him.

If Pope Francis purges the staff where does he get the people to fill it? Even if we assume there are plenty of good people in Italy to help him, how would he know who they would be? I think it is going to take time and he needs to keep his knives very sharp. If he can keep up a series of 'corrections' as he did with the bank, it will keep him in the news and the corrections on people's minds. Otherwise they will, as Augustine said, go back to their ways when the corrections cease.

Anonymous 5,
Good point. The various letters of Pope Paul VI addressed specific problems, such as Modernism, attacks on "private" Masses and priestly celibacy, contraception, etc. I would argue that these were in keeping with VCII, but I do get your point about the letters of JPII and BXVI.

How many people read an entire encyclical years ago, pre-internet (other than a summation)? With the Internet, more people are actually reading it, I would think. I know it amounts for the most part to preaching to the choir, but with so many today off-key, out-of-tune and not on the same page, maybe it will have some good effect.

Gene and Anon 5 have got it right. However, if you want decent liturgy you have to be prepared to do something about it. It will not be imposed from above. Support with your attendance and money those who attempt it, and eschew those who don't. Don't be put off by the obligation argument - it might have worked when the Mass was more or less standard, but doesn't now. No-one is obliged to attend something which is to all intents and purposes an occasion of sin.

Very interesting point. My guess, though, is while certainly a greater absolute number of people probably read the documents, it's still a very small percentage of people. Also, who is the audience? If Catholics, I would guess (all the following numbers are strictly guesses, sometimes based on my own experience of a particular culture), maybe one in fifty or a hundred will read it. If Protestants, my guess is that maybe one in a thousand will even know that a new encyclical has been published, and of that one in a thousand, the vast majority won't care. If Orthodox, I've no idea how much attention they pay to the Vatican. If non-Christians, I imagine the numbers would be way lower than for Protestants. The reason for the low numbers aren't availability, but the culture of the potential readers. Just mulling here.