BOMBSHELL SPEECH TO BISHOPS OF LATIN AMERICA FROM POPE FRANCIS 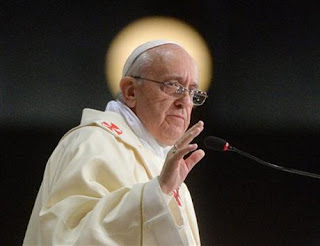 Also, no nuns becoming priests, only someone superficial in understanding the Catholic Faith would propose such a thing! (These are off-the-cuff remarks, that Vatican Radio will shortly include in their post).

GOOD EXCERPTS FROM THE TALK TO CELAM WHICH YOU CAN READ IN FULL HERE!

1. Making the Gospel message an ideology. This is a temptation which has been present in the Church from the beginning: the attempt to interpret the Gospel apart from the Gospel itself and apart from the Church. An example: Aparecida, at one particular moment, felt this temptation. It employed, and rightly so, the method of “see, judge and act” (cf. No. 19). The temptation, though, was to opt for a way of “seeing” which was completely “antiseptic”, detached and unengaged, which is impossible. The way we “see” is always affected by the way we direct our gaze. There is no such thing as an “antiseptic” hermeneutics. The question was, rather: How are we going to look at reality in order to see it? Aparecida replied: With the eyes of discipleship. This is the way Nos. 20-32 are to be understood. There are other ways of making the message an ideology, and at present proposals of this sort are appearing in Latin America and the Caribbean. I mention only a few:

a) Sociological reductionism. This is the most readily available means of making the message an ideology. At certain times it has proved extremely influential. It involves an interpretative claim based on a hermeneutics drawn from the social sciences. It extends to the most varied fields, from market liberalism to Marxist categorization.

b) Psychologizing. Here we have to do with an elitist hermeneutics which ultimately reduces the “encounter with Jesus Christ” and its development to a process of growing self- awareness. It is ordinarily to be found in spirituality courses, spiritual retreats, etc. It ends up being an immanent, self-centred approach. It has nothing to do with transcendence and consequently, with missionary spirit.

c) The Gnostic solution. Closely linked to the previous temptation, it is ordinarily found in elite groups offering a higher spirituality, generally disembodied, which ends up in a preoccupation with certain pastoral “quaestiones disputatae”. It was the first deviation in the early community and it reappears throughout the Church’s history in ever new and revised versions. Generally its adherents are known as “enlightened Catholics” (since they are in fact rooted in the culture of the Enlightenment).

d) The Pelagian solution. This basically appears as a form of restorationism. In dealing with the Church’s problems, a purely disciplinary solution is sought, through the restoration of outdated manners and forms which, even on the cultural level, are no longer meaningful. In Latin America it is usually to be found in small groups, in some new religious congregations, in tendencies to doctrinal or disciplinary “safety”. Basically it is static, although it is capable of inversion, in a process of regression. It seeks to “recover” the lost past.

2. Functionalism. Its effect on the Church is paralyzing. More than being interested in the road itself, it is concerned with fixing holes in the road. A functionalist approach has no room for mystery; it aims at efficiency. It reduces the reality of the Church to the structure of an NGO. What counts are quantifiable results and statistics. The Church ends up being run like any other business organization. It applies a sort of “theology of prosperity” to the organization of pastoral work.

3. Clericalism is also a temptation very present in Latin America. Curiously, in the majority of cases, it has to do with a sinful complicity: the priest clericalizes the lay person and the lay person kindly asks to be clericalized, because deep down it is easier. The phenomenon of clericalism explains, in great part, the lack of maturity and Christian freedom in a good part of the Latin American laity. Either they simply do not grow (the majority), or else they take refuge in forms of ideology like those we have just seen, or in partial and limited ways of belonging. Yet in our countries there does exist a form of freedom of the laity which finds expression in communal experiences: Catholic as community. Here one sees a greater autonomy, which on the whole is a healthy thing, basically expressed through popular piety. The chapter of the Aparecida document on popular piety describes this dimension in detail. The spread of bible study groups, of ecclesial basic communities and of Pastoral Councils is in fact helping to overcome clericalism and to increase lay responsibility.

These categories apply to the post V-2 Church in general. The HF is remiss in presenting a clear direction. He could do it by clarifying the V-2 documents and deviant theology and liturgical practices. For my money, the Rio event is a a Pelagian pilgrimage with its obvious left wing deviations. He needs to consult Benedict XVI further because the HF's main issues are not with the self-conciously orthodox but the nuns-on-the-bus types, the social justice heresies.

Six years ago, Pope Benedict XVI gave us (theoretical) greater access to the older form of the Roman Rite and now it appears that Pope Francis may be criticizing those who are attached to such things (older liturgical forms and devotions) because they "are no longer meaningful" even on a purely cultural level.

What are Catholics with a sincere and heartfelt attachment to the older form of the Rite (and restoration of some of its features in the newer Form of the Rite) to make of this?

And why does he call us "Pelagians" (a kind of epithet, as I see it, kind of like calling a crude-mannered person a "Philistine") rather than what we actually are, traditionalist Catholics? I want to like our new Pope but he can be rather prickly.

I am not sure he is doing any of the things people are afraid of. Here is another possibility: he is essentially giving people rope to hang themselves on. 'Pelagians' I think clearly refers to the SSPX. I attend a FSSP church and there is no hint of dissension at this time.

Some of the other rhetoric, 'making a mess' etc. could easily refer to the people who have done so much damage to Liturgy, Doctrine, and the Faithful by trying to reinvent Christianity.

I do not have a good answer for his call for jobs for the poor. I think he may see the Progressive governments need for the External Poor and the need to regulate economies for that purpose. But I am not clear. THere is certainly that factor in South America and I think he is acutely aware of it. It is my own ignorance of how he perceives and understands that situation that is a void for me.

I haven't watched one second of WYD coverage this year. I'm just not interested in what Francis has to say. His pauperism does not attract me one bit. When I was a child, and Paul VI was pope, I never really gave him a second thought. I knew he was the pope and the leader of the Church, but that was it. It wasn't until JP2 that I became interested in the papacy (my interest actually started with JP1). I really consider myself a "Benedict guy". But with Francis, it's like a step backward to Paul VI. I know he's the pope and the leader of the Church.... but that's it. I'm not giving him any more thought than that and I'm waiting optimistically for the next pope.

Thanks to the "Old Order", our Church buildings are empty, and being sold to Real Estate Developers.
The question of celibacy, female ordination, Even the structure of an independent Vatican City, has to be looked at. In reality,Our Catholic church does NOT need to ba an independent nation, the catholic Church is every parishoner throughout the world.

We'll never know the answer in this life, but I contend that the empty Church buildings were caused, in part, by what happened AFTER the mid-1960's (up until current times) NOT by the pre-1965 Church (where attendance at Sunday Mass was much higher).

Notice that I did not mention Vatican II, rather, I mentioned a time-period in relation to the drop in attendance. This was not caused by Vatican II--it was caused by bad liturgical implementation, bad catechesis and a general breakdown of our culture in the 1960's which continues to this day.

In the photograph the pope's halo is jumping the gun a bit, although it seems that nowadays being elected pope gives you a fast track to sainthood. BTW, Pio Nono was beatified at the same time as John XXIII, so why has he been left out?

Halo? I thought it was egg yolk...

Anonymous at 12:38--you're right, the Pope should be a virtual hostage to a secular government, like the Ecumenical Patriarch in Turkey.

Given that the "Old Order" (whatever) quit existing some fifty years ago, it behooves me to say that it cannot be blamed for current problems.