A PURELY HYPOTHETICAL SCHISM FOR THE ANNALS OF HISTORY 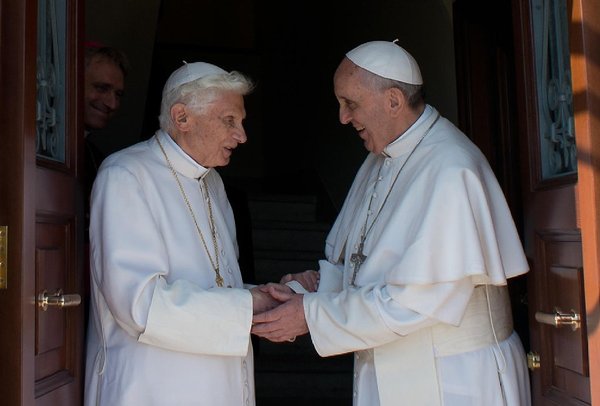 The Los Angeles Times has and article on the Church, titled, Vatican infighting: We told you two popes could be a problem. You can read it by pressing these TWO SENTENCES HERE.

As you can imagine, even when parishes get new pastors who have different personalities and theological perspectives than the previous one, there is a time of upheaval until things settle down. People leave, stay quiet and wait it out or they embrace the new pastor with gusto and change their own perspectives on things inherited from the previous pastor.

I suspect the same is true with the Cardinals and bishops of the world. I suspect like the laity there are those who love Pope Francis and his austerity, but others who really hoped that Pope Benedict's papacy to heal the rift between the Church prior to Vatican II and the Church afterward seems to be wrecked by Pope Francis, ordained a priest in 1969 and enamored with that period of time and iconoclasm. But time will tell. Rupture may be his game.

But here is my hypothetical and it is precisely that and I think Pope Benedict's love for the Church would never lead him to set out on this path. But here goes.

What if Pope Benedict decided that Pope Francis is leading the Church into a theology of rupture with the past and stripping the papacy and the Vatican of its history and symbolism and replacing it with a secular model of governance, modern and puritanical?

And what if Pope Benedict who seems to be growing stronger since departing the papacy actually was ill and maybe suffering from depression and anxiety and was being pressured by the corrupt aspects of the Curia and the gay lobby to resign and this pressure got to him and under duress he did resign.

This sounds like a Dan Brown novel, but what if Pope Benedict came out and said he is reclaiming that which he did not resign because his resignation was made not in sound mind, but he was pressured by it, harassed by those who wanted him to resign and he was not in sound mind when he did so.

Would he still be the pope and Pope Francis an "anti-pope?" Is this possible in the hypothetical?

And what havoc would this play upon the Church and what division and schism would we see the likes of which we haven't ever seen?
Posted by Fr. Allan J. McDonald at Tuesday, July 02, 2013

I think the Church would do what it did one of the previous times this happened: Cardinals would get together and rewrite the history to nullify one of the papal conclaves to find one of the popes wasn't legitimately elected.

The Church has a history of successfully rewriting history, so it's really not much of a stretch. I guess it'd be harder to do that these days with mass media, but I'm sure those crafty Cardinals would find a way...

I think they should meet at high noon in Vatican Square and have it out Old West style.

He could set up a Traditional Rite ala the Eastern Rite folks now. Would be a big deal, but I think might be very good for the Church.

Did you really mean 'anals'? The arseholes of history? A fascinating speculation ...

A monarchical papacy is also a "secular model of governance."

And the list of similarities goes on and on. Pope Francis may be all about understanding and living the difference between modeling the Petrine ministry on European monarchical models and the Gospel model of Non Ministari Sed Ministare.

And the answer is:

Pope Benedict would be the pope.

Francis would be excommunicated, but he would not excommunicate Benedict, because it's not in his nature. The Swiss Guard would side with Benedict and kick the heretics out of the Vatican. Obama would denounce Benedict and commend the "real" Catholics for embracing "progress". Al-Quaeda would blow up the Vatican, kill Pope Benedict and the false church would reign alongside the Anti-Christ who would reveal himself after bringing "peace" to the world after Benedict's death.

"Is this possible in the hypothetical?"

It's possible in the probable, and a consummation devoutly to be wished.

The Bible, itself, uses monarchical analogies for God, Christ, and the Kingdom, Ignotus. Its ok...or did you forget that God is Sovreign of the Creation?

John Nolan, The anals of history would be quite a long list...

Pin/Gene - No, I did not forget, but I understood that the images from Scripture are not from the royal courts of the Middle Ages in Europe.

God, as sovereign of creation, is the perfect steward thereof. We share in that dominion - that "Lordship" - over creation not by dominance, which is the monarchical model, but by caring for creation as God does.

Perhaps the Royal Courts of the Middle Ages took their cue from Scripture...besides, the images from Scripture are undoubtedly monarchical and triumphant. God's rule of the creation goes far beyond mere stewardship...he isn't some butler or gardener, nor is He a member of the Sierra Club.

Francis would be pope. Mental imbalance is precisely one of the reasons a pope would abdicate,and if Benedict was not in a state of mind to freely make his own decisions- especially on his ability to exercise the petrine ministry- then he would have no business sitting in Peter's chair, even if his claim to it was/is legitimate.

I like Art Fleming's projection best...you could make a movie...

Pin/Gene - I think God is the model for the Sierra Club, actually...

Actually, secular European monarchs took their cue from the papal court, rather than the other way round. The Curia was a model of centralized efficient administration when most kings were wandering through their realms, dragging their officials and treasury with them, like so many gypsies.

"...I think God is the model for the Sierra Club..." Interesting theology, Ignotus, but I'm hardly surprised. I'm sure you probably sing hymns to garbage disposal and snail darters in your church...

Pin/Gene - No, we sing hymns to God, understanding that we are to imitate God's love for creation in the way we make use of the natural gifts of which we are stewards, not owners. In that way we exercise the 'dominion' we were given when we were created in God's image.

I don't have any disagreement with that, Ignotus. I just think your "God is the model for the Sierra Club" is a bit grandiose and pretty strange theology.

As a Brit I'm rather fond of a bit of pomp and circumstance, but I concede that Paul VI's dismantling of much of the papal court ceremonial was inevitable. However, although I can understand him not wearing the ugly and monstrously heavy tiara with which he was crowned (although publicly disposing of it in the way he did was grossly discourteous to the people of Milan who had only recently shelled out for it), he assumed that his successor would be crowned. It was JP I who messed things up for his successors regarding the coronation, and JP II who by not using the sedia gestatoria made it virtually impossible for his successor to reinstate it.

The liturgy, however, is a different matter. Nothing in art, music, architecture and vestment can be too good for God. Last Sunday (transferred Feast of SS Peter and Paul) I motored up to the Birmingham Oratory where the principal Sunday Mass is Solemn EF.(It's a 70 minute journey - I suspect Americans would think nothing of driving that distance for a pizza, but I digress.)

When I see the Roman Rite done like this, two words spring to mind, and they are "noble simplicity". Nothing is "added on" as is all too common in the Novus Ordo. There are none of these tedious "bidding prayers". You don't have to bother about how many people to shake hands with. There is no need for people to come up from the congregation to read - the subdeacon sings the epistle and the deacon the gospel. You're spared the OF angst of wondering what's going to happen next - there are no nasty surprises, and no options. Communion, even with a large congregation, is not prolonged; two priests at the main rail and a third at the rail of a side altar. No tedious hymns - just decent organ music at the beginning and end. There's no time-wasting either; by the time the sung Introit and Kyrie are finished, the celebrant and ministers have completed the prayers at the foot of the altar, the altar has been incensed, and the Introit and Kyrie have been read. No waiting for the choir to finish the Sanctus and Benedictus before starting the Canon.

Contrast this with your average parish OF - fussy, wordy, disorderly, subjective, unpredictable and over-long; certainly not simple, and not in the least bit noble.

"It's a 70 minute journey - I suspect Americans would think nothing of driving that distance for a pizza, but I digress."

John, you forgot the great neutralizing factor of Americanism - laziness. Anyway, you're blessed to have those oratorios, which are a regular feature on NLM to make us Americans jealous...

I would gladly drive 70 minutes for an EF on Sundays. Alas there are none in this Diocese in any range, and the closest available one is in the neighboring Diocese and takes me nearly twice that.

Templar, aren't there enough people in your diocese to form a 'stable group' and petition for the EF according to the procedures set forth in Summorum Pontificum?