THE HOLY FATHER HAS QUITE A LEARNING CURVE IN TERMS OF ENDANGERING SECURITY, LAITY AND HIMSELF--HIS CAR IS MOBBED, HE IS IN A SMALL ECONOMY CAR. I WOULD SUSPECT THAT BRAZIL IS ASTOUNDED AT WHAT IS HAPPENING RIGHT NOW! 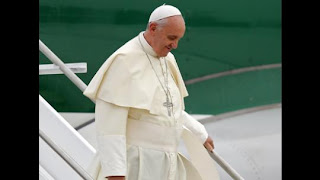 There is quite a bit of enthusiasm and danger as the pope's motorcade, unlike any other papal motorcade to a foreign country, is generating. Things are out of control folks! Pray for the security, who could be harmed or killed, the laity that are doing stupid things to touch the pope and his car and the Holy Father himself. I think he should rightly be criticized for this.

FOLKS, THIS IS DANGEROUS!

Now things are safer and the Holy Father is in the Popemobile. I've turned to CNN and FOX. And there it is baby talk from the First world monarchy. Only a few outside Buckingham Palace. Hundreds of thousands for the pope! There is quite a contrast in areal shots!

NOW IT APPEARS THE GOVERNMENT OF BRAZIL HAS HAD ENOUGH AND HAS MADE THE BISHOP OF ROME TO GO TO A HELICOPTER, GOVERNMENT OWNED, TO GO TO THE OFFICIAL WELCOMING CEREMONY! HE HAS TRADED A YUGO LIKE CAR FOR HELICOPTER TRANSPORTATION, A BIT EXTRAVAGANT. THE HOLY SPIRIT MIGHT BE TELLING THE POPE SOMETHING.

I too am watching live on EWTN. Seeing the members of security sandwiching themselves between the Pope's car and the buses in moving traffic is frightful.

I am happy that he is now being transported in the Pope Mobile.

Yes, Father - most people on the Xt3 webcast feed were quite aghast at the scenes of people crammed against the side of the pope's little car - people trapped between busses and the car... a real melee at points.

Once the Holy Father got into the popemobile at the wider thoroughfares with WYD volunteer barricades and local police, things settled down. Scary up to that point.

A security re-think would be in order.

On another tangent, we have a new member of the royal family - a prince!

Well, hey, nothing humbler or less majestic than getting himself crushed to death by the huddled masses of the poor...kenosis and all that...

Why do Americans care about the British royal family? I don't understand it.

In actual news, Alabama will be executing a mentally ill man on Thursday. Please pray.

Marc, I have never understood the US fascination with British Royalty, either.
Why is Alabama executing Eric Holder?

Father, I just had the stangest thought of a large group of drag queens running after you during the cherry blossom festival to get a hold of your pink jacket and rose vestments.

Marc, I agree. As someone who loves history, I have a certain regard for the British monarch, but I don't see why so many Americans fawn over the family. Then again, better they fawn over the House of Windsor than the House of Obama.

Not watching the Pope or the Royal baby....

Agree the Pope should realized he will be unable to walk among us as he is use to doing. Just like a President etc. Too many people lose control of their senses.

As to the execution. I am from Atmore, Alabama where Holman Prison is located, as is Fountain Corrections. I will be praying for all concerned, the prisoner, the family of the prisoner, family of the victim, my cousin Gary who is the Warden and my brother in law who will probably be walking Mr Lackey to the death chamber as he is a guard on death row. My family will have to carry out the sentence of the State.

As to Mr Lackey's mental state, he was found to not be mentally ill and he has asked the sentence be carried out as quickly as possible. He sought the AG of Alabama's assistance to end the endless appeals. He admits to the crime and acknowledges he must pay the penalty.

I do not know if Mr Lackey has become a Christian, but his victim Mr Newman was and was actually hear on the 911 tape offering to pray for the man who was killing him.

Brazilians make nice helicopters. I would love to ride in one. We are buying some Tucanos from them. I wish I had known. I could have suggested the Pope get a ride in one of those.

"Why do Americans care about the British royal family?" Interesting one this. When the 18-year-old Prince of Wales visited New York in 1860, 300,000 out of a population of 800,000 turned out just to get a glimpse of the royal carriage. So it's not simply an aspect of modern celebrity culture, although the royals know how to market themselves in a way that puts mere A-listers to shame.

I'm a loyal subject of HM, but two hours of saturation coverage when the only news was a)it's a boy, b) he weighs 8lb 6oz and c)he hasn't been named yet, strikes me as excessive.

Other Mark, thank you. I represent inmates on Alabama's death row (but not Mr. Lackey). Everyone I've met at Holman has been quite nice, including my clients. I don't begrudge those who do their jobs in carrying out the sentences. I'm sure it's a difficult job.

As to his mental health, from what i understand, it's not quite as clear as your comment makes it out to be. Anyone who volunteers definitely has mental health issues. Of course, no one really knows the extent of this young man's issues because the courts haven't seen fit to conduct an evaluation.