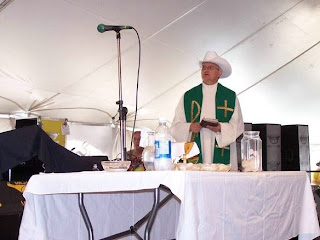 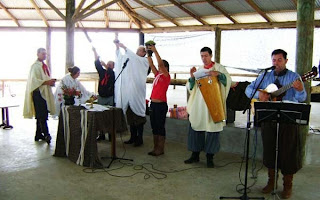 I write this on the heals of the post below on "Five Myths Concerning Pope Francis." Yesterday those longing for a return to the past and past methods of translating the Roman Missal from the Latin to the vernacular in a approximate sort of way, i.e make it up as you go, were thrilled that Pope Francis actually "read the black and did the red" of the Portuguese translation of the Latin Missal. That translation has yet to be revised but is in the process of being revised and ultimately approved by the Pope.

As some of you may know, the English Missal was one of the first to be revised and in a very literal way when it comes to the Latin because the English Missal seems to have become defacto the Missal that is used (not the Latin one) for other languages to translate their Mass into their own language. So the Vatican really, really, wanted the English missal's new and improved, (brothers and sisters, truly, truly improved)to really, really reflect the Latin original revised after Vatican II.

The Portuguese Missal as currently experienced and translated under the old and moldy methodology of "equivalency and make it up as you go" is even worse than the old English one we recently discarded by the grace of God, pure grace, for if it had been left to the elitist theologians and bishops we have who continue a love affair with the 1960's method of translating, we would have only a slightly revised English Mass today. And if these people had gotten their way, and they still can't believe that they didn't, we would have seen even more radical changes to the English Missal more in line with the Episcopal Book of Common Prayer for their eucharist and more like the Lutheran eucharistic liturgy. We would have had the option of substituting a hymn that resembles the Gloria for the Gloria itself (similar to replacing the propers with equivalent hymns) plus some other bold initiatives that thank God were nipped in the bud in the 1990's (actually in the late 1980's).

I know this, because as director of Liturgy for the Diocese of Savannah from 1985 to 1991, Bishop Raymond Lessard would pass on to me suggested revised translations of certain parts of the Mass that had been sent to him and all the bishops of our country. I was aghast at what I was reading. But at that time, the USCCB's Office of Divine Worship was drunk on power and control and really, really thought they could tell the American bishops and ultimately the Pope what the American English Missal would look like. This was the 1960's mentality well into the 1990's on steroids!

The one and only National Convention I attended around 1987 or so, associated with the NCCB's Office of Divine Worship, had people like myself from all over the country coming up with resolutions and demands that they would send to the NCCB for implementation. To say that this group was off the wall liberal and progressive and heterodox would be an understatement. I never again went to one of these conventions so disgusted was I with these power hungry liturgical control freaks and elitists.

But I digress. As I mentioned, the Portuguese Missal is in the process of re-translation. So the old one is still in use. This is the missal that Pope Francis was obligated to use yesterday and for all the Masses that he celebrates in Portuguese. While I don't know all the details of this Missal which is the worse one in the world, even worse than our previous 1970 Missal, it still maintains "and also with you" and the "We of the Creed" and so on. It also has some adaptations peculiar to the Portuguese translation, based upon the now defunct and flawed method the Vatican gave translators way, way back in the dark ages of the 1960's, an age that some liturgists are still enamored and wish to return, going backwards of course, not forward, going heterodox rather than orthodox.

The one option that was given to Pope Francis at the Mass at the Marian Shrine on Wednesday is the following greeting for the beginning of Mass:

O Sehor esteja convosco. Ele está no meio de nós.
(The Lord be with you. He is here in our midst.)

A paz esteja convosco. O amor de Cristo nos uniu.
(Peace be with you. The love of Christ has brought us together.)

And of course, their old and moldy missal continues to use, "For all" instead of the more accurate "for many."

The old and moldy English translation of the Missal also had a peculiar response for the greeting of Mass which was seldom or ever used in the USA because people could not remember the response unless they were told ahead of time what to expect and to look at the response. This is it (do any of you ever remember hearing or using this?):

Priest: The grace and peace of God our Father and the Lord Jesus Christ be with you.

People: Blessed be God, the Father of our Lord Jesus Christ.

But the real story here for the throw back progressives of the day is, Pope Francis "read the black" and did the red at his Brazilian Masses! And in doing so, what Pope Francis was modeling is fidelity to the Magisterium of the Church, meaning the pope and bishops in union with him by using the authorized liturgy of the Church until the new one is issued and approved!

Oh, and at yesterday's Mass, the Holy Father once again exalted the Blessed Virgin Mary to the nth degree and preached about the devil! Did you read that on any progressive liturgical blogs?

Finally, the only innovation that I see Pope Francis consistently implementing in terms of the Order of the Mass and for which I applaud him is that any public speeches of greetings offered to him is now done after the Entrance Procession and prior to the Sign of the Cross and greeting. This is something that other bishops should take note as most, including Pope Benedict, allowed this sort of thing to take place during the Mass and after the Sign of the Cross and Greeting, usually with everyone being invited to sit for it!

What Pope Francis models and what every bishop and priest in the world should do is to read the black and do the red of the Missal, meaning after the greeting, no silly improvisation, no, "good morning/afternoon, how are ya?", no mini sermons, acknowledgements or made up introduction, simply read the black of what the missal has written for introducing the Penitential Act: "Brethren, Let us acknowledge our sins to prepare ourselves to celebrate the Sacred Mysteries." Then there should be silence and then one of the options from the Missal is used for the Penitential Act. This is what Pope Francis did yesterday, but using the old and moldy Portuguese missal of the cowboy/gaucho 1960's!
Posted by Fr. Allan J. McDonald at Thursday, July 25, 2013

It's pretty sad when it's news for the Pope to follow the rules. Alas, such is modernity...

If only the other priests there would do the same. Shocking pictures of liturgical abuse coming from WYD on the web (but nothing yet that I haven't witnessed with my own eyes in our beloved American south, unfortunately).

Reason #31416 for maintaining continuity with the Benedictine model of liturgy mostly in the universal language of the Church, especially at international events such as WYD. And why the Church should take advantage of these great teaching moments, instead of staging embarrassing events that spread damage throughout the world by setting a bad example on world-wide television.

If this becomes the norm, I am NOT wearing chaps....

Priest: The grace and peace of God our Father and the Lord Jesus Christ be with you.

People: Blessed be God, the Father of our Lord Jesus Christ.

I do remember one in a great, long while hearing the former, but I never heard the response -- I grew up with those Liturgical Press missalettes, so it may have been on the first page, but I cannot remember the text -- I remember better the awful cover art.