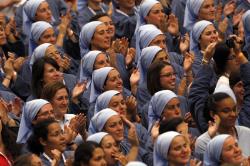 When I was in the seminary between 1976 to 1980, one of the things that my seminary professors made an impression on me was what they called "kingdom values" which translated meant "Gospel simplicity." They taught us that even though as diocesan or secular priests we would not be making a promise of poverty at our ordination, that we should be living simply.

The fact was that most of us (except for me of course) weren't living simply. We loved going to the finest restaurants in Baltimore and there were many, and we loved going on trips. We didn't have to live in the seminary everyday. On the weekends, beginning on Friday, I would stay at the rectory of my pastoral placement the last two years in the seminary. I was shocked the first two years to experience that the seminary building was almost empty, including faculty beginning at midday on Friday as the last class always finished by noon.

These "kingdom values" also was incorporated into the Mass at that time. Vestments were nice but very austere without ornamentation as we were told the vestments themselves were the symbol and symbols shouldn't have more symbols placed upon them. ceramic cups or chalices were used. These reminded me of small pots for plants, they looked like painted terracotta plants pots.

So Pope Francis' ethos esthetically and ascetically brings me back to the 70's. In terms of kingdom values for those who do not take the vow of poverty, I find this refreshing.

However, applying this to the Liturgy in a 1970's sort of way leaves a very stale taste in my mouth. I wouldn't counsel exorbitance in budgets for the liturgy, but I would say that everything in the Liturgy from buildings to altar accoutrements to vestments are our gifts to God and belong to all of us, rich and poor alike.

Here is what the Holy Father said to seminarians and novices yesterday, Saturday, July 6:

(Vatican Radio) Pope Francis on Saturday evening told future nuns and priests and consecrated laypeople to keep “freshness” and “joy” in their lives, as he said: “There is no sadness in holiness”.

Speaking to participants in a four-day international event for Seminarians, Novices and those on a vocational journey, Francis gave an off-the-cuff lecture to seminarians and novices from across the globe, gathered in the Paul VI Hall.

In his remarks, the Pope urged those present not to be tempted by a culture that exalts provisional values, and he told them to avoid trappings like the latest smartphones and expensive cars so they can devote more resources to help the poor.

And then Pope Francis took seminarians and novices to task for being “too serious, too sad”. ``Something's not right here,'' Francis told them pointing out that `'There is no sadness in holiness,'' and adding that such clergy lack `'the joy of the Lord.''

“To become a priest or a religious is not primarily our choice; it is our answer to a calling, a calling of love”.

`'If you find a seminarian, priest, nun, with a long, sad face, if it seems as if in their life someone threw a wet blanket over them,'' then one should conclude `'it's a psychiatric problem, they can leave - `buenos dias’”.

And he highlighted the fact that he wasn't talking about superficial joy - `'the thrill of a moment doesn't really make us happy,'' warning against the temptation to seek `'the joy of the world in the latest smartphone, the fastest car.''

“It hurts my heart when I see a priest or a nun with the latest model of car” he said. And Francis continued saying “cars are necessary. But take a more humble one. Think of how many children die of hunger' and dedicate the savings to them”.

Urging all those with vocations to be authentic and true, the Pope also reminded them never to be afraid to recognize their own sins. And speaking of their formation, Francis said there are four fundamental pillars: spiritual formation; intellectual formation; apostolic life – during which one must go forth and announce the Gospel; and community living. “On these four pillars” – Pope Francis said “you must build your vocations”.

During his remarks, Pope Francis also praised the late Mother Teresa, who cared for the most impoverished sick of Calcutta, India, and held her up as a courageous example. “I would like a more missionary church,”' the pope told the young people “'Not so much a tranquil church, but a beautiful church that goes forward.”

The Day for Seminarians and Novices concludes on Sunday, with Mass presided by Pope Francis in St. Peter’s Basilica.

The pope takes his life into his own hands as he enters the auditorium for his audience with seminarians and novices at hour 1, minute 9--the video is in Italian but you get a sense of the enthusiasm of these young people:

This is the Mass with the seminarians and novices this morning, July 7, the 6th Anniversary of Summorum Pontificum:

MY FINAL COMMENT ON THIS 6TH ANNIVERSARY OF SUMMORUM PONTIFICUM: Pope Francis doesn't model the Mass the same way as Pope Benedict did. However, he does model the gravitational pull the EF Mass can have on the OF Mass as seen in this Mass and most of the Masses Pope Francis has thus far had at the Vatican:

Let me count the ways:

1. There is a processional congregational hymn. In the case of this morning's Mass it is the Italian Year of Faith anthem that is well, very Italian sounding--it has an Italian ethos that is common in their Italian hymns.

2. However, when the Pope arrives at the Foot of the Altar, the choir alone sings the official Introit for the Mass and in Latin. This is excellent and shows that ordinary parishes could do the same, a congregational hymn for the procession, once the priest gets to the foot of the altar, transition to the official chanted Introit by a schola or choir. The official offertory and Communion Antiphons are also chanted in addition to other "filler" music.

3. The Mass is all in Italian including the Eucharistic Prayer, but the Kyrie is in Greek and the rest is in Latin: Gloria, Credo, Sanctus, Agnus Dei--isn't this a great compromise? Can't the Church worldwide be mandated to do at least these parts in Greek/Latin?

4. The Holy Father continues to distribute Holy Communion to the deacons of the Mass by intinction as the deacons KNEEL before him.

5. The marvelous Benedictine Altar Arrangement is maintained by the Holy Father.
Posted by Fr. Allan J. McDonald at Sunday, July 07, 2013

"3. The Mass is all in Italian including the Eucharistic Prayer, but the Kyrie is in Greek and the rest is in Latin: Gloria, Credo, Sanctus, Agnus Dei--isn't this a great compromise? Can't the Church worldwide be mandated to do at least these parts in Greek/Latin?"

Yes this would be wonderful!

Meanwhile, it would also be wonderful if pastors who are so inclined toward desiring this in the Mass would do what they can do, such as institute it for each and every Mass their own parish....just sayin'...and hoping.

Referring to recent thread title, I am certain that the seventies will go down as the "anals of history..."

"Vestments were nice but very austere without ornamentation as we were told the vestments themselves were the symbol and symbols shouldn't have more symbols placed upon them." I wonder how much money was spent replacing vestments and furnishings in the interest of this aggressive style of simplicity. In my present parish, just about everything original--much of it donated--was thrown out and replaced in the 80's by a "simple" priest.

Father, as a recent initiate into the faith, I always wondered why elements of the Mass, such as the Gloria, Credo, Sanctus and Agnus Dei, were not still in Latin after Vatican II . . . this being true for the Mass universally in all countries . . . as a unifying element of the Mass.

A totally vernacular Mass tends to disunify us; the universal use of Latin in some elements of the Mass would be unifying and the explanation would serve as a good point for catechesis in our universality to all cultures.

I tend to believe that the seeming, absolute disuse of Latin in the United States must be motivated by something other than purely liturgical considerations.

Tom, I've realized the arguments against learning Latin are usually propounded only by those saying Latin is no longer used.

In fact, writing students are usually discouraged from using words of Greek or Latin origin if an Anglo-Saxon string of words fits the definition. Thus, the Vatican would be major trouble in an English class for using "consubstantial with the Father" instead of "of the same substance as the Father."

This, while telling students to "be concise"...(I also think this is why one can almost draw a line between books published circa before 1965, and those after).

Not the Missa de Angelis again! The Kyrie and Gloria aren't even Gregorian chant! This is St Peter's, not a suburban 1950s parish! Give us a break!

The rule is (A.) the faithful are to be taught their parts of the Mass in Latin, so that (B.) they may participate in Latin at Mass celebrated at international gatherings. That is a matter of law in the Western Church.