CONTINUITY, YES, DISCONTINUTY, YES, NOT EITHER OR BUT BOTH/AND

This monarchy depiction of Pope John XXIII is an outdated image, but please don't replace it with a dictatorship image, or a democratic republic politician depiction either! 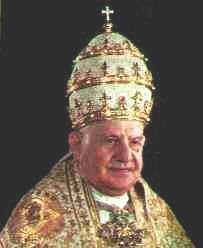 There are obvious elements of discontinuity between Pope Francis and Pope Benedict:

1. Francis is an extrovert and wants to be around people and guard the hen house

2. Pope Francis has in his short papacy called the Church meaning each and everyone of us to fidelity to the Magisterium and has done so far more frequently than Pope Benedict ever did.

3. Pope Francis is going to rely more upon collegiality with the college of bishops and consult with them through the synod of bishops. He is going to emphasize the authority of local bishops, but only when they act in union with Peter and the Apostles, the Pope and the other bishops--no lone rangers in other words.

4. The only difference I detect in the big papal Masses is in style of vesture and the Holy Father can't chant, but he is austere as was Benedict and not into exaggerated gestures which extends to a minimalism that is appropriate for the Latin Rite even the offertory procession is quite perfunctory and one detects that the Holy Father would rather not even have it

Now for the continuity

1. The biggest bombshell is that the encylical on faith is being released this Friday, July 5th and is written by Pope Benedict with some minor alterations by Pope Francis

2. Praytell reports that an "ecumenical celebration of the 'Holy Eucharist'" with Catholic priests participating was to occur over the weekend in Switzerland. At the last minute the Catholic priests were told not to participate and withdrew. The implication is that pressure from Rome was placed upon the local bishops to make sure that the priests did not participate in such an illicit and sacrilegious celebration of a so-called "Eucharist." The Swiss bishops were to meet with Archbishop Muller, head of the Congregation for the Doctrine of the Faith on Monday, July 1. No reporting apart from this tidbit has leaked concerning this meeting as of this writing.

3. Cardinal O'Malley one of the closest consultants of Pope Francis forbade a renegade Austrian priest, schismatic to say the least, from speaking on Church property in the Archdiocese of Boston. This schismatic priest is calling for active disobedience of clergy to their bishops. One presumes that Cardinal O'Malley acted in concert with the blessings of the Holy Father.

My final comment: Some pundits are carping that the Bishop of Rome has made no comment on the recent Supreme Court decision concerning gay marriage and DOMA, one more step toward a nationwide acceptance of legal gay marriage, the redefinition nationwide of what marriage is in civil law.

Many American bishops individually have made important comments including the Bishop of Savannah, Bishop Gregory Hartmayer. Should the Bishop of Rome usurp their local responsibilities and make his own statements that would trump theirs?

I don't think the Holy Father wants to do that. He wants to lift up the legitimate authority of local bishops in union with him. Now if a local bishop starting blessing same sex civil unions, I think they would be called to the woodshed by the CDF like the Swiss bishops.

He wants to model for the bishops of the world and priests of the world and the laity, that bishops and priests are pastors and fathers. That is refreshing! Get rid of the politics, monarchical, dictatorship and democratic! This is good indeed.
Posted by Fr. Allan J. McDonald at Tuesday, July 02, 2013

"He doesn't want to be democratic shrill." What the heck does that mean?

I think he meant "shill" not "shrill". He doesn't want to be a shill for "democracy".

Anon, would it be too much to ask for you to pick an identity if you're going to post regularly? you can still maintain you anonimity with an account, but your thoughts and posts can still be attributed to "an individual". Anons 1 3 and 4 are currently available if creativity isn't a strength LOL.

Shill or shrill whatever English is my second Language, it is fixed, certainly a typo!

That image of Pope John is only out of date to 1789 Jacobins, 1968 hippies, and their progeny. Would you make the same remark regarding the crown mitre of an Eastern bishop, whether Catholic or Orthodox? Because that's exactly what the tiara is.

While perfectly understandable, I wish you'd stop with the Pollyanna insistence that Pope Francis is really about sunshine and lollypops. This papacy, er, ministry, is a disaster of unmitigated proportion, and the emperor isn't merely wearing no clothes, he's buck-ass naked.

Father McDonald, would it not be good for Francis to "model" not how the bishops of the world should act, but how the Vicar of Christ on Earth should act?

There is no substantive noun 'shill'. There is a (rare) transitive verb 'to shill' meaning 'to shell or husk'. Can we please stick to the Queen's English, rather than a pidgin aberration of the same?

I don't knows abouts no Queen, we ain't gots one here in Merika.

According to Webster's you're right it isn't a noun, but it's meaning is "to act as a promoter or spokesperson", so saying "Democratic shill" would be right and proper, and has been since circa 1914 in the US apparently.

John, from the Merriam-Webster Dictionary:

shill
noun
Definition of SHILL
1
a : one who acts as a decoy (as for a pitchman or gambler)
b : one who makes a sales pitch or serves as a promoter

Origin of SHILL
perhaps short for shillaber, of unknown origin

Perhaps American English rather than the Queen's, but certainly of common everyday usage out here in the former colonies.

One who poses as a satisfied customer or an enthusiastic gambler to dupe bystanders into participating in a swindle.

I look forward to reading the encyclical on faith by both popes. However, is this all that can be expected from the year of faith? Isnt this the year we are suppose to bring people back to the Church, and celebrate all the good harvests of VII? I have barely heard a whisper about the YoF in some time, I guess lack of faith in Rome leads to lack of faith across the Church.
I have been listening to audio of Fr. Malachy Martin and his talking about the whole truth of the third secret of Fatima, as well as reading Bl. Anne Catherine Emmerich, the more and more I am starting to see where things are headed.

Maybe Rome sees that there is not much to celebrate these days?

John, In south Georgia, "shill" is an often used word, as in: "If ya' buy her some flowr's and talk rill nice, shill go to the barbeque with ya'."